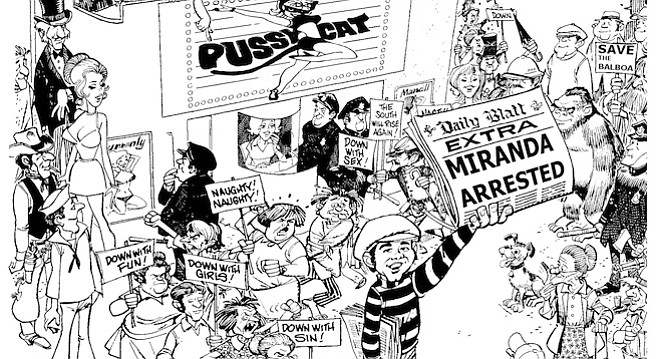 As stated in the Supreme Court summary,“On November 23 and 24, 1973, pursuant to four separate warrants issued seriatim, the police seized four copies of the film Deep Throat, each of which had been shown at the Pussycat Theatre in Buena Park, Orange County, CA. On November 26, an eight-count criminal misdemeanor charge was filed in the Orange County Municipal Court against two employees of the theater, each film seized being the subject matter of two counts in the complaint."

The OC Superior Court held a hearing, viewed the film, took evidence, and declared the movie to be obscene. Then, in June 1974, a three-judge court issued its judgment and opinion declaring the California obscenity statute to be unconstitutional, which the Supreme Court agreed with. Three of the four prints were later returned, and Miranda and his employees eventually beat the criminal charges.

Buena Park Pussycat neighbor Donna Bagley filed a lawsuit against Miranda and Walnut in 1974, demanding closure of the theater. Her suit claimed she was “significantly offended, outraged, and has suffered shame, embarrassment, and emotional distress as a result of the public scandal caused by the continuous and daily presence, advertisement, and public exhibition of patent hard-core pornography.” She also said the theater attracts “immoral persons,” including “criminal elements, undesirables, deviates, and dropouts.”

According to a mid-’90s study about L.A.’s Pussycat on Santa Monica Boulevard, commissioned by the group Concerned Women for America, between 1977 and 1994 “the Los Angeles Police Department made 2000 arrests for lewd conduct on the premises. The conservative estimate is that every arrest required four hours of police work for two officers at a minimum of $55 per hour for each officer. This does not include the substantial costs attendant on review by a supervisor, prosecution, court proceedings, and probation.”

Walnut Properties (“a real estate holding and investment company”) filed for Chapter 11 bankruptcy in June 1994, claiming liabilities of $17.7 million. The filing listed George Tate as Walnut’s president and sole stockholder; the ’Cats are never mentioned by name. Creditors with the largest claims included First Fidelity Savings and Loan of San Diego ($2.08 million), Queen City Bank in Long Beach ($2.38 million), and Topa Thrift and Loan in Century City ($2.8 million). However, the bankruptcy petition was ruled incomplete. The court’s summary stated, “The debtor has been involved in several lawsuits causing further extraordinary expenses. The comments... indicate a creditor who obtained a judgment against Walnut has attempted to tie up the debtor’s assets, disrupting the ability to operate his business.” The Chapter 11 bankruptcy actions were converted to Chapter 7 actions in August 1994.

Walnut’s bankruptcy cases were discharged/dismissed in February 1996. Shortly thereafter, the company was hit by the IRS with a $182,294 tax lien, but the company tried to keep at least a few plates spinning. In 1998, Walnut borrowed $341,000 against mortgages in San Diego. The following year, it borrowed another $120,000 in San Luis Obispo and took out a $350,000 mortgage loan in L.A. In March 1999, the company renewed its bankruptcy application, with the process finally completed in December 2001.

In 2001, around $15 million in Walnut assets all over the state (mostly properties) went to liti- gants Charles Perez and Kathy and Michel Harouche , in a “trustee’s deed” covering various judgments obtained against Walnut.

Walnut (Jonathan T. Cota, president) tried to save the company’s former headquarters at 5445 West Sunset Boulevard in July 2001, by transferring ownership of its second floor from Walnut Incorporated to the George Tate Living Trust. The entire property ended up being transferred in April 2002 to TK Theaters, Incorporated, in lieu of a $1,110,000 debt.

In December 2002, Walnut lost a judgment of $2,643,333.00 to Ralph and Nancy McLaughlin in Porterville, CA, over unpaid rent and damages relating to a property Walnut had kept tied up for a proposed multiscreen theater since 1992, through Tate’s death and the multiple bankruptcy filings.