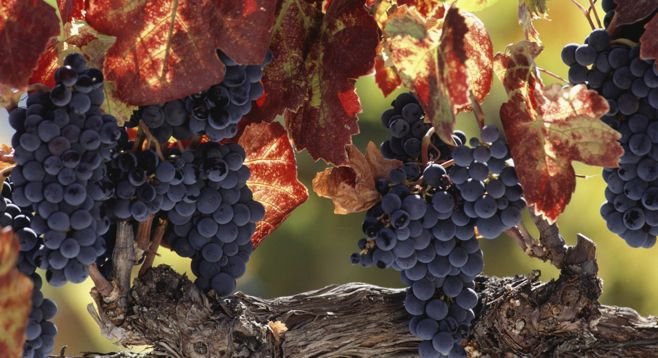 Therese Gotfredson has been around the Ramona wine scene since before Bill Jenkin and Frank Karlsson got together and hatched the notion of Ramona Vintner's Cellars — a winery operation that would source fruit from the valley's vineyard-planting boomlet. It was love that brought her into the club — both gastronomic and romantic. "I was a graphic designer for 20 years and got burnt out on the corporate world. So I started a catering business, Trezette's, and my specialty was gourmet appetizers. I did a lot of cocktail parties, and I really liked to pair wines with them. I'm a good taster." Enough clients had Ramona addresses to get Gotfredson to move her operation (and her home) from Tierrasanta. And even before she did that, she had met and started dating Jenkin.

"Bill and I had a planting party for his acre of Syrah — 500 vines. He did most of the hard labor — digging holes and such — and I did the maintenance in the vineyards. I started taking classes: a winemaker's class at Costa Mesa with local wine guru Lum Eisenman and several grape-growing seminars out at Shadow Mountain Winery. I really enjoyed it, and I met other grape-growers through the Ramona Chamber of Commerce mixers." She and Jenkin started taking wine jaunts up north, getting advice from successful wine operations in places like Paso Robles — places not unlike Ramona.

And in 2001, when Jenkin and Karlsson started up their winery, she stepped in as operations manager. "I did all the PR, the media, and the labels, and ran the tasting room" on Ramona's main drag. But after a few years, there were breakups: Jenkin and Karlsson parted company, and so did Jenkin and Gotfredson. Jenkin started up Pamo Valley Vineyards; Gotfredson stayed on with Karlsson, who kept the tasting room (and the label design) and renamed his winery Lenora.

Like others before her, Gotfredson found selling San Diego wine to San Diegans a difficult business. "I ran into a lot of stop signs when I tried to promote Lenora at tasting rooms down in San Diego. I didn't like it. I thought, 'There are some really great wines out here, and if you put them in your store, you'll see results.' They wouldn't take the chance. I did get the Dos Rojos in at the Third Corner," but other venues were still sounding the old mantra of "people want to drink Napa and Sonoma." She noted that Salerno has had some luck (I recently spotted his wines on the shelf at Mona Lisa down in Little Italy), which may be due in part to his knack for winning medals in competition. But, in general, "A lot of people aren't aware. They still go up to Temecula."

If you can't get distribution, you have to rely on Internet sales and — if you're lucky enough to have one — the tasting room. Lenora has a tasting room, but "the location is really bad. Bad parking, you can't see it from the road, and the overhead is pretty high." Gotfredson went out looking and found what looked like a sure thing: a cozy box of a building next to King Leo's chocolates (and just down the road from the Orfila tasting room) in Wynola. But Karlsson didn't want to move, and so she struck out on her own, opening Country Cellars, a tasting room featuring the wines of San Diego County.

Of course, "opening" is often a short word for a long process. Gotfredson found the building in August of last year and didn't open until April. "I had to go to the county first, because they said there were more alcohol establishments up here than population." (Wineries remain a subject of contention in the backcountry; more on that in the future....) Then, the ABC required her to expand the square footage of her shop and to wall off a smallish corner up front for a tasting area. There was the matter of ADA compliance, and she had to put bars on the windows to protect against the threat of thirsty burglars. Becoming an advocate for local product was suddenly getting expensive. But she soldiered on and got a little landscaping help from William Holzhauer of Hacienda de las Rosas Winery, who planted a row of Petite Sirah vines out front as an ad for his backyard-vineyard-building venture. (Inside is rustic and woody, with redwood lattice, electric grape-lights, and consignment work from local painters.)

Then, in March, Frank Karlsson died, and Gotfredson found herself scrambling to help out her old employers as they attempted to keep the place going in its founder's absence. She told Karlsson's wife Kerstin that she needed to spray for powdery mildew yesterday and worked at stabilizing and bottling several Lenora wines that were ready to go. "Lum Eisenman was really helpful again," she says, "and so was the Ramona Vintner's Association." While Karlsson was ailing, "We got a pruning and bottling part going at Lenora."

But open she did, and an ad on the website wineevents.com brought in a good crowd from all over. "I got a lot of response from San Diegans coming up for the weekend, and a lot of people from Orange County come and visit Julian. I'm with the Julian Chamber of Commerce and the Julian Merchant Association, and it helps that I know most of the winery owners — they want to see me succeed. Witch Creek" — which runs a tasting room in Julian — "sends customers to me," and the people at the Orfila room were glad for the company. To keep things neighborly, she doesn't carry their wines, nor those of Menghini or J. Jenkins (except, sometimes, the latter's apple wine). She's more interested in providing an outlet — even a showcase — for the numerous wholesale/online-only wineries dotting the county: San Pasqual, Salerno, Pyramid Vineyard, Mahogany Mountain, and Flying Kite, among others. She's hoping to start carrying Edwards and is looking forward to the first releases from several newly bonded operations around Ramona, including a Tempranillo from Joe and Becky Cullen's Cactus Star Vineyard. "I think Tempranillo is an up-and-coming grape."

While she waits for the apple-season tourist rush, Gotfredson is summoning her catering skills back into service, putting on a white-wine and appetizers event on July 22 (reservations required, see www.countrycellars.com). A red wine and chocolate pairing will follow on August 5, giving her another chance to work with her neighbors at King Leo's. The two have already managed one successful collaboration: "I offer the Mahogany Mountain Zinfandel Port in a King Leo's chocolate cup. That's kind of my niche, and it's been going well. Some people will sip and then take a bite, but a lot of guys just pop the whole thing in their mouths."