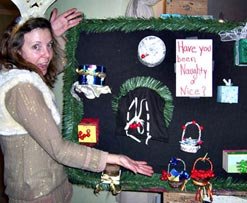 The first one I went to was at the Art Academy of San Diego in East Village on December 7.

It was the same night I was going to see the Doors (or remaining two members) at the House of Blues, so I had to get to the bash when it started at 6 p.m.

Sarah was setting things up as I walked in. She was near a board that read, "Have you been naughty or nice?" There was a variety of presents, and Sarah told me to pick one. I got a Twix bar, and she said, "You've been nice." Another guy got a small bottle of liquor. She said that he'd been naughty. I saw one woman peeking before making her pick.

A few of the presents had shots of whiskey. Sarah's husband said, "I think she got the idea for this when we were at Burning Man. They had this thing called 'Drinko Plinko,' like that Price Is Right game. You drank where the thing lands."

I grabbed a Milky Way out of another present and headed over to a guy who was teaching people how to make snowflakes.

I heard a woman say that her friend is from Brazil and had never made a snowflake before.

When I snapped a photo of the guy showing others how to make snowflakes, he turned his back on me and continued. I heard him say as I walked away, "I don't want to be known as the snowflake guy."

I thought they did a good job decorating the place, which was about 15,000 square feet. They had lights hanging low from the ceiling. I was talking to an employee who was wearing a Santa hat, and she said, "It's sometimes hard with all the junk we have over there." I replied, "Uh, you aren't talking about the art some of the students did, are you?" She said, "Well..."

As I was walking around the gallery looking at the artwork, I slipped on a wheelchair ramp. Someone said, "Are you sure you didn't drink a shot from the naughty board?" I said, "I think the wheelchair ramp is going to put someone in a wheelchair."

I looked at a catalog and saw that the school taught drawing, painting, sculpture, and a variety of other techniques. My date, who I had picked up from work, said she was hungry. "We can't be the first to eat," I suggested. "The party just started."

When we saw another couple grab plates, she said, "Hey, I think people are starting to eat." As we opened up one of the pasta dishes, a guy said, "Oh, so we're opening that up now." My date looked at him and said, "We're starting a trend. It's time to eat."

When we sat down, we were across from a guy that owned half the paintings and sculptures in the gallery. I got a bit bored listening to him talk about art but enjoyed talking to his wife about movies. She said, "I don't go to movies anymore. Spending $9 is too much for me." I told her I didn't mind that as much as talking or cell phones in the theater.

We spent half an hour discussing One Flew over the Cuckoo's Nest .

Then she told me about her trip to Argentina, where, she said, for under $30 a couple could get a meal of incredible steaks and wine. She said, "I'm from Texas, so I know good steak. And the cows in Argentina are grass-fed, and there's no fat in the meat." Her husband heard this and said, "It is not marbled." I wasn't sure what he meant, but all the talk was making me crave a steak. In the end, I settled for the salad and pasta I had on my plate.

Someone complained about the desserts. I had a cupcake and a few cookies and was stoked. A woman grabbed a cream puff and thought it was a mini roll. When she pushed it aside, my date leaned toward me and said, "I want to take it off her plate. They didn't have any more up there. I just don't know her well enough to do that."

A girl who just graduated from a nursing school in Ohio was sitting at our table. When I asked her why she chose to move there, she said she wanted to experience the seasons and that she had grown up here. I said, "That kind of makes sense...until winter comes." What I wanted to say was "Ohio?!"

After dinner, I spoke with Sarah and her husband again and noticed that Sarah had reindeer antlers on her head. She told me that they got married at the academy and that when she was taking a printing class there, she made the wedding invitations. Now, that's making use of the facilities.

She told me that the hot apple cider was spiked with booze. She was filling all the presents on the "naughty or nice" board with shots of whiskey. Someone said, "You're trying to kick this party up a notch, huh?"

I noticed a board near the front door with glue and art supplies. They wanted everyone arriving to add something to collage. We were told it was going to be displayed in the front window. I noticed someone had covered a Heineken bottle with beads. Someone else glued packaging peanuts to make it look like snow. I took some of the doilies and wrote amusing messages on them. They were probably funnier to the people who had the spiked cider.

One lady asked us if we made art. My date said, "Doesn't everyone, to some degree?" I said, "I used to draw those turtles that were in the TV Guide. And I could glue macaroni to construction paper back in elementary school with the best of 'em."

I overheard one woman in all black tell another woman she liked her green jacket. She said, "You look very Christmasy and I look like a lump of coal."

I took a tour of the gallery with one of the owners. He told me that all the art was created by San Diego artists. After he showed a few pieces, I could tell it would be a while, and I started to feel like a third-grader stuck on a museum field trip. I soon realized that I wasn't in school and that I could do whatever I wanted. I walked back out, grabbed a shot of tequila, and talked with Sarah again.

As I was finishing a bottle of green tea, a guy said to me that he couldn't believe anyone would drink the tea. A student had brought cases of it a long time ago, and the guy thought it was probably bad by now. My date laughed, but I looked at the bottle, thought about it, and continued drinking. It couldn't be any worse for me than that tequila was.