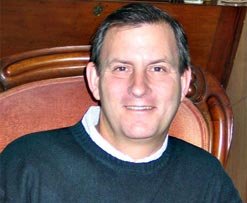 Like so many of his illustrious predecessors in the wine-writing business, Paul Lukacs has a day job. But unlike, say, Gerald Asher or Kermit Lynch, Lukacs doesn't make a living selling wine, or importing it, or even teaching about it. Instead, he serves as chair of the English Department at Loyola College in Maryland. Which, as it happens, is how he got involved with wine in the first place. "I had a student in the mid-'80s who was doing an independent study that evolved into a reading group," recalls Lukacs. "Somebody had given him a book about wine, and he said, 'Why don't we learn about this?' This was right when wine was becoming more of a big deal in the States -- you were sort of hearing about it more, and I think you sort of felt that you didn't know anything about it." It wasn't long before the reading group had become a drinking group, albeit one bent on understanding as well as pleasure.

For Lukacs, "It became a hobby, and then a passion. And it turned out to be a passion that was rough to do on a college professor's salary. Not that I wanted to be a great collector -- I wanted to taste the stuff I was reading about. I wanted to taste more and learn more and know more." Happily, he found that the Washington Times was pulling wine stories off the wire and convinced them that a major wine market needed a local voice. Some 13 years later, he's still on the beat, and "through that, I have tasted lots of stuff."

A side career as a wine writer led to an article in American Heritage magazine on the emergence of American wine in the latter half of the 20th Century, and that led to a book contract for what would eventually become American Vintage: The Rise of American Wine. The book won just about every award a wine book can win, and people like Michael Apstein at the Boston Globe could write sentences that started, "Lukacs, who is rapidly becoming our leading expert on domestic wine..."

Book One, not surprisingly, set the stage for Book Two. "I would do interviews, and once you were done talking about the 19th Century and Prohibition and the Paris Tasting, people would say, 'Well, that's all really interesting, but what should we drink?'" (The American Drinking Public: Nothing If Not Practical.) "So I thought, 'Well, I'll tell you what to drink.' The second book -- choosing 40 great wines -- came out of that."

It's worth noting that Lukacs didn't say "choosing the 40 great wines," even though his second book was published as The Great Wines of America: The Top 40 Vintners, Vineyards, and Vintages. "There was never an attempt to say, 'These are the top 40 wines in America.' I resisted the 'the' in the title, but the publishers thought it would sell better that way. You choose what battles you fight." Why the hesitation? "This is not an objective science, but if you were trying to say, 'What are the top rated, or top thought of, wines in the U.S.?' you would end up with 35 of them being Cabernet-based wines from the Napa Valley. I didn't want to write a book on 'What are the great wines of the Napa Valley?'"

Instead, "I wanted the wines I chose to be important in and of themselves, but also, to be representative of something else. That 'something else' might be a movement (the Rhone Rangers, embodied in Alban Vineyards Reva Syrah); might be a grape (Navarro Vineyards Gewürztraminer); might be a place (Dr. Frank's Riesling from New York's Finger Lakes Region); might be whatever (Mondavi Reserve Cabernet's value as a Brand Identity)." (Parentheses mine.) "I think every wine in the book is legitimately a great wine. Is every wine as significant in a global sense as some of the wines -- say, from Napa -- that were excluded? No. But are they significant in their own way? Sure. The hope was that you would paint 40 small portraits, but if you put the portraits together, it would -- to mix metaphors -- be sort of like a patchwork quilt. You would have a big picture of all the big issues in American wine at the time."

Incidentally, Lukacs, whose vantage point allows for statements about global significance, had this to offer about American wine vis-à-vis the rest of the world: "I think it's a double-edged sword. On the one hand, I think America has phenomenal influence -- American consumers, and the American press speaking for American consumers. We are, in terms of fine wine, the biggest wine-consuming country in the world. There's no doubt in my mind that our perceived palate has an influence on wine styles in the rest of the world. On the other hand, I think that one of the greatest mistakes that American wineries and winemakers have made is, they've been able to sell virtually all of their wines domestically. They haven't gone to the trouble to grow international markets. I think it's difficult for American wine to be taken seriously as world-class stuff in Australia or Japan or France or Switzerland if you never see it. It's something nobody knows about," save perhaps for a few intrepid collectors. <

"Shouldn't there be some American wine on the list at the top restaurant in Geneva, or Sydney, or Tokyo? Maybe there's one bottle, and then there are 150 Bordeaux." Curious to think that others might be regarding us as rich art collectors who dabble in Sunday-afternoon watercolors, even as we think of ourselves as the great revolutionaries of the wine industry, bringing technological salvation to the global winemaking community, producing Pinot unlike any the world has ever seen, etc.

And while we're on the subject of global comparisons, it may also be worth noting that Lukacs did not include price in his assessment of great American wines. Some wines happened to be comparatively inexpensive -- the Stone Hill Norton has a suggested price of $18, compared to $235 for the Harlan Estate -- but nothing was chosen as great because it offered remarkable quality at low expense. I suggested that America had largely ceded the field in the war of the fighting varietals, and Lukacs agreed. "I think if you want to spend under $15 for a bottle of wine, you would be much smarter to look to South America than to look to most parts of the United States."

The editor on Book Two was one Maria Guarnaschelli at W.W. Norton, who also happened to edit food writer James Oseland. When Oseland took over the editor-in-chief reins from Colman Andrews at the esteemed food magazine Saveur in late 2006, "They decided they wanted somebody on staff who really does wine. Colman Andrews...knew stuff about wine, so he made wine decisions. The new editorial team doesn't pretend to have that level of wine knowledge. I think that, in large measure because of Guarnaschelli, Oseland got my name. I wrote a couple of things for them, and we got along, and then off we went." Last spring, Lukacs took over as the magazine's wine editor. "I write regularly for them about wine; I work with them on other stories regarding wine, and I'm the voice of advocacy for wine at the magazine."

He's also the magazine's public face in the wine world. Together with St. Supéry winemaker Michael Beaulac, he'll be hosting Saveur's Second Annual Best of the Med Wine Cruise, a ten-day idyll from Barcelona to Rome in May of '08. And a couple of weeks ago, he hosted a panel on Zinfandel as the magazine's representative at the San Diego Bay Wine & Food Festival. It went well enough, though Lukacs might have liked a little more controversy, and it had him thinking about future events, ones that might "look at real comparisons. Comparing Old World and New World wines, for example. Looking at different wines with different foods. That seems to be really true to the spirit of what Saveur is all about."