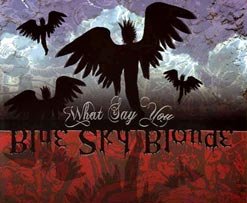 What the band sounds like to me is a combination of accomplished musicians with a shaky, unsure lead vocal. Compositions range in time and beat and stand out as sophisticated slow rock, a little on the heavier, guitar-laden side.

Most notable performances are from bassists Bogelln and Millard. In the absence of a strong voice and a lack of catchy hooks, the short guitar solos and robust bass lines take on the extra responsibility of punching up the songs, and they do fairly well.

The problem? The album is uninteresting, with one exception: their send-up of Robert Palmer's pop classic, "Addicted to Love," which the band has rocketed into a glam-pop whine-fest, reminiscent of a watered down Tsar...which is really great. The rest of the CD is a mild shade of every drudging near-metal rock band out there, from Adema to Taproot, and with record label funds and radio airplay focusing on indie rock with smarty-pants overtones and odd front man vocalists (Modest Mouse and the like), Blue Sky Blonde seems like a freefall ten-mile dive without a chute.