Back from the Dark Side

"It's cool if you're a punk rocker and you have to walk with a cane, but if you're just doing it for looks, like the Droogs from Clockwork Orange, it's kind of played out."

Shot Out Hoods front man Dave Hood has used a cane since an accident in the summer of 2006.

"I was towing [cars]. I fell asleep at the wheel. I was in a rural part of Spring Valley. This pole went right though the engine compartment. It missed the engine and impaled my leg. I was bleeding to death."

Hood says he spent 20 minutes struggling to "peel my leg off the pole" to get to the phone that was on the floor of the cab. 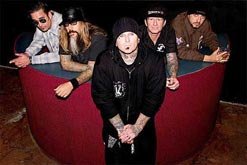 Not so shot out (the hoods)

"My leg was like an accordion. It was broken in six different places. I had a compound fracture. My bone was coming out of the skin. I waited about an hour and a half. They couldn't find the address....

"It was the first time in my life I was in an accident that I wasn't on drugs. The first person to greet me [in the wreckage] was a sheriff deputy. Here I am, laying there dying, and he says, 'Here you go, dude. Blow in this Breathalyzer.' When it came up negative, he says, 'Okay, it's negative.' And then all the sheriffs drive off."

Hood, 32, was taken to Grossmont Hospital.

"My foot was pointed in the other direction. My girlfriend Hayley was told that I would probably not get out of surgery with my leg.... But a great surgeon happened to be working at four in the morning -- Rina Jain, MD, saved my leg."

Launched in 1995, the Shot Out Hoods have opened for the Dead Kennedys, the Dickies, the Exploited, Fear, and the Adolescents. The band played from 1995 to 2003. ("Until I had to go away for a while," says Hood.) The band's reputation for being composed of "devil-worshipping, satanic, heroin-addicted junkies" was due to Hood's perspective and lyrics. His most famous stunt may have been when he doused a Bible with lighter fluid, lit it on fire, and threw it into the crowd at the Sports Arena.

"I liked the darker side. I switched over, but I still sing about the same stuff. I didn't change my lyrics; you just can't change your lyrics to the songs."

He says the Shot Out Hoods reunion planned for next week is the first since 2004. They appear December 22 at Brick by Brick.