Ramble about Bonelli Regional Park in the foothills of the San Gabriel Mountains near Pomona.

Girded by freeways and busy streets, the trails around Puddingstone Reservoir in Bonelli Regional Park are hardly the place to get away from it all -- unless, perhaps, you arrive early on a Saturday or Sunday morning. During those quiet times you can get a sense of how peaceful a spot this was before World War II. In those distant days, the reservoir nestled among serene hills overlooking a patchwork quilt of citrus groves.

Today, the reservoir and surrounding Los Angeles County-operated regional park are quite popular, with attractions such as the Raging Waters aquatic amusement park, a golf course, acres of RV camping and picnic grounds, horse stables, hot tubs, and even motorboat drag races on occasion.

Although many of the trails at Bonelli Park were designed to serve equestrians, they are popular with hikers, mountain bikers, and leashed dogs, too. About 14 miles of dirt roads and bridle trails lace the outer perimeter of the park, not even including some pedestrian and bike paths that follow parts of the reservoir's shoreline.

To get to Bonelli Regional Park, exit the 57 freeway at Via Verde, just north of Interstate 10, and turn right toward the park's main entrance. Pay the day-use fee, ask for a trail map of the park, and then find a parking spot. You can circumnavigate the park by at least two different routes. One, about seven miles in length, takes you south, underneath Via Verde by way of a tunnel and onto a grassy slope. Eventually, you reach the top of the slope (elevation 1200 feet) where there's a fine view over the Puente Hills to the south and across flat lands stretching interminably east toward San Bernardino and Riverside. After following that ridge, generally east for the next mile, you arrive at a road intersection close to the park's east entrance. From there, some improvisational navigation can take you north across McKinley Avenue and onward across a possibly muddy creekbed to a paved walking/biking path along the reservoir's north shore. Stay with the goal of circling around the lake as you continue west past a boat-launching area, up and over the reservoir's spillway, down into a ravine below that spillway, and back up to a large, equestrian staging area. After that, just keep heading south, parallel to the freeway, until you're back at the starting point.

It's possible to cut the round-the-lake distance to five miles or less by sticking to roads and trails closer to the lake shore, especially on the reservoir's south side. 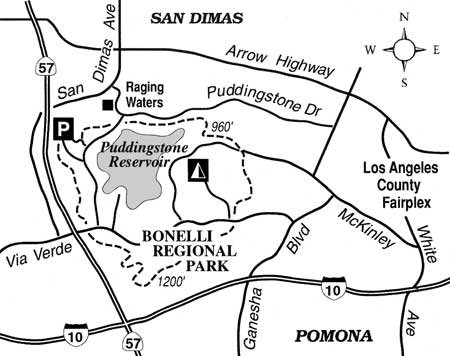