How Truth Can Be Told

"I hate flattery, don't you?" she said to me once. 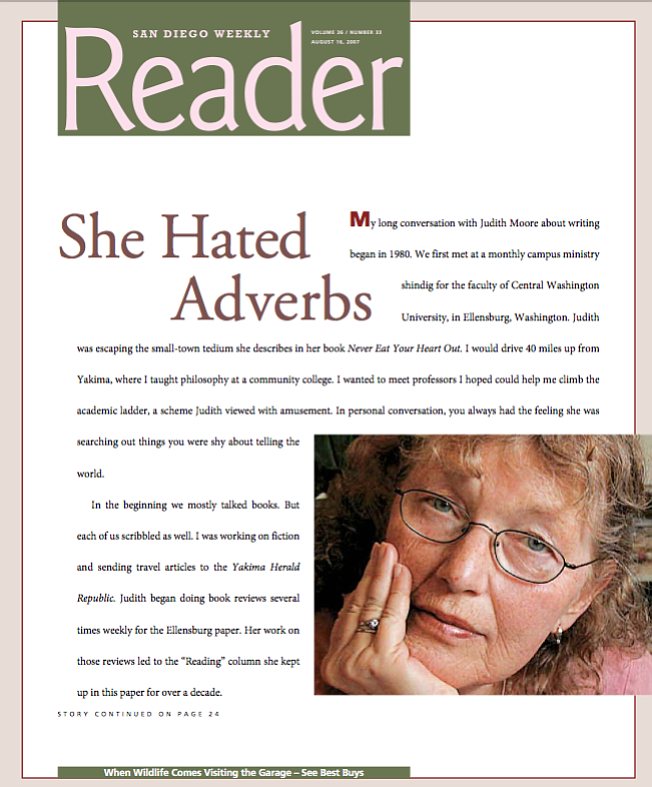 I was 26 and unemployed when a friend told me about the San Diego Reader and its editor, Judith Moore. I had published a few essays and stories in small literary journals while amassing a file of rejection letters, including one that declined my autobiographical essay on the grounds that "some subjects are untranscendable." I had taken to sending proposals for nonfiction essays to children's magazines. At least then the material I had failed to transcend would not be my own life.

With the usual mixture of hope and dread, I sent Judith a sample of my work: a published review of a photography book called Sleeping Beauty that contained black-and-white portraits of dead children — 19th-century memento mori of the grimmest sort. Luckily for me, Judith was not a flincher. She asked me about where I lived and what I was interested in (besides death), and she began to give me story assignments based on those things.

For the next 12 years, she kept feeding me ideas and letting me write. Some editors rewrite your work so that you sound more like them, and some want you to adopt the generic voice of the magazine, but Judith did neither of those things. She proposed an idea — diary of an orange grove, say, or the evolution of home economics classes — and then, when I had written the whole story, gave suggestions for additional development. The line-by-line tinkering she left to me and the copy editor, which allowed me to feel she trusted my instincts.

I trusted her instincts too, because she was the kind of writer I wanted to be. If she liked something I did, I felt hope. If she made even the smallest criticism, I sat back down at the desk.

But mostly I wanted to write well enough to earn flattery from a writer who proved that no subject is untranscendable. When she describes her young self standing in a circle of children who are chanting, "I don't want her, you can have her, she's too fat for me," it's like staring into those voids in the volcanic ash that Giuseppe Fiorelli found during the excavation of Pompeii. Fiorelli injected plaster into the voids and discovered he could make casts of the dead. Judith did the same thing with her childhood, preserving in her books every vanished corporeal detail, and whenever I feel that my writing has become lifeless and vague, I open one of her books to see how truth can be told.