Clamber onto a skull-shaped promontory rising above interior Carlsbad.

At 513 feet in elevation, Cerro de la Calavera (translated "Skull Hill" and also known as Mount Calavera) rises modestly above lesser hills and valleys of Oceanside, Vista, and Carlsbad. Picturesque Calavera Lake lies at its northern base, and empty lands stretch for some distance east and south. Much of this landscape is being preserved by such entities as the California Department of Fish and Game, but some of it will eventually succumb to future housing subdivisions.

Billed by some as a "volcano," the Calavera peak is actually a volcanic plug -- the solidified remains of a blob of magma that forced its way upward, barely or perhaps not quite reaching Earth's surface. This happened about 22 million years ago, during the most recent episode of significant volcanism in San Diego County. The gradual eroding away of surrounding layers of sedimentary and volcanic rock has exposed the core of that plug.

Although there are several ways to approach the peak, the following directions are simple: Exit Interstate 5 at Carlsbad Village Drive. Turn east and continue 3.3 miles to the end of that street at College Boulevard. The Calavera trailhead, featuring parking spaces and interpretive panels, lies straight ahead across this intersection. You can travel by either foot or bicycle from this point on, but parts of the route ahead are dangerous and virtually impossible to ride on a mountain bike. The area has experienced past off-road-vehicle abuse, and so there are minor trails everywhere. You, however, should make an effort to stay on the marked, designated trails.

Descend the wide, initially steeply plunging trail ahead, and pass under powerlines after about 0.3 mile. Stay right at the next intersection (0.4 mile) and continue south on a service road another 0.2 mile, where you'll find an information board and maps of the "Carlsbad Highlands Ecological Reserve." Turn left and head east to a marked trail heading left, almost straight up the mountainside. The brief, heart-pounding climb will take you without delay to Cerro de la Calavera's flattish summit, where you have a virtually aerial view of Calavera Lake in the north, the ocean in the west, and rolling hills and distant mountains around an arc of about 200 degrees. Just northwest of the summit, a chunk of the mountain is missing -- chewed off by gravel-mining operations that continued into the 1930s.

You've come just 1.2 miles. The return trip, via a different route, is also 1.2 miles. Backtrack down the mountainside about 0.1 mile, and stay right on a trail that descends northwest to the Calavera Lake dam. Cross over the top of the dam and pick up a trail/dirt road heading left (south). You'll soon reach the trail you followed earlier on your initial descent from the intersection of Carlsbad Village Drive and College Boulevard. 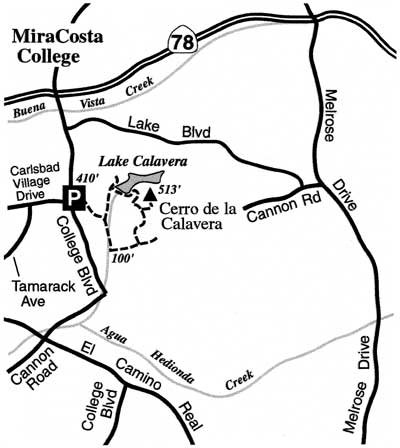