“Write everything as if it were the last thing you’ll ever get a chance to write.”

Judith Moore urged me to think in terms of "timelessness" and Kleenex journalism. 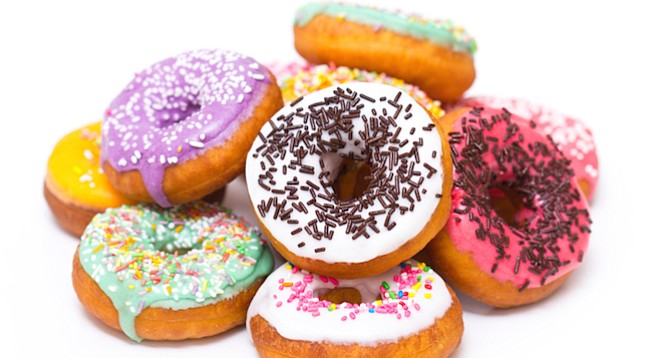 Memorial Day weekend is over as I write here and so this will not exactly be timely, but Judith Moore, a friend and long-time editor of this paper, died very recently. I see she is remembered in lead Arts features in The New York Times and the L.A. Times, and I can only guess at how many literary journals and small-press periodicals. Judith always urged me to think in terms of "timelessness," even while executing what could easily be treated as Kleenex journalism - what is, after all, ephemera. Her point, though never stated flat out as far as I recall, was that it's all ephemera, even the opening lines of scripture, and that good writers are simultaneously the manufacturers of fish-wrap and are priests - of a sort. I got that sense from her, anyway, and it always made me feel something more than an ink-stained wretch while hanging around with her. She said to me once, "Write everything as if it were the last thing you'll ever get a chance to write." This became a source of great, sometimes self-deprecating fun when we were telephonically editing something like an article concerning camping out in an all-night Laundromat or a 24-hour donut joint just to see what happens. Both projects were a source, between us anyway, of great satisfaction and laughs. The laughs, however, were not private jokes. They were available to those who could read well and were equipped with a sense of irony and/or pathos. If you were lacking either, you might well have found these lengths of prose absurd and or incomprehensible. I never heard any criticism of the kind about either piece, personally.

But some, apparently, did. A friend of mine defended the Laundromat piece by answering a critic's "I liked it, but what the hell was that about?" by responding, "For one thing, about $300. I believe." Beside the point, but no better an answer than was deserved.

A visiting college recruiter for the London School of Drama sent a note addressed to me calling "All Night Donuts," "a Tour-de-Force of Nothing. This," he went on to say, "is meant in the best possible way. The writer seemed reluctant to take on what he clearly saw as a waste of time and quickly made something of it. I have never seen outside of certain Eastern European existential comedy that would certainly fall flat in the U.S., maybe Britain as well. Even enough arch intellectual Slavic readers might find 'Donuts' to be a dull American thrust at baggy pants intellectualism but being born American and with a history of small literary press (editing at Yale for example), I sensed the presence of an editor who knew his [her, actually] man, a later-aged student I'm guessing (a former publishing employee at a small house? I may be way off the mark, forgive me I'm hardly psychic) the writer really does have a disparate sense of commercial fiction marked with a sense of humor reminiscent of certain genre humorists..." The typewritten letter went on to mourn the dearth (or death) of humor in its less baggy-panted forms in American writing. I keep the letter in plastic as he goes on to compare my writing with better writers and I do not come off, as I would have expected, at least in terms of Mr. Daryn Cox, M.F.A., badly. I recite it to myself slowly in the shower on occasion. I mention this letter from Cox because it takes a keen sensibility (and a flailing, newish writer) to detect the hand of an editor at all.

Yes, Memorial Day weekend was a memorial for me. Not, I am reluctant to admit, in terms of missing casual friends and acquaintances because of war. And that is the patriotic purpose of the holiday during which we are to draw our attention to those who gave their lives to keep the world safe from Communism, Terrorism, Islam, Chaos, Asian Imperialism, Teutonic Nationalism, etc., etc -- what Michael Kerr, author of Dispatches, summarized as "keeping the Doo-Dah safe from the Ding-Dong." No, it was a memorial for me because of a coincidence of timing. My friend (and boss, really) just died; it is close to the third anniversary of my closest brother's death and a few other relatives and friends. I am at the age where the attrition rate begins to stack up around you until you and it become one.

Yes, someone said, sarcastically and not long ago in print, "As cheery as TGIF." But I am no Glum Bob. I am known in certain circles for my sense of humor and irrepressible life affirmation. I am not unaware of summer's warm, full embrace and promise even as I type. If I am a little down around the keyboard edges, it's because I have lost sight of my rudimentary Buddhist adages, echoes, and tools. Or the new regimen of Lexapro has not kicked in yet.

Memorial Day weekend was an occasion for me to remember much, not the least of which being people who once affected me who are now dead. One of them, a kind of Bukowskyesque barfly, Larry B., who philosophically (aloud anyway) drank himself to death and is memorialized by a plaque on his favorite barstool among a row of mostly unmarked grave-post/barstools at a saloon that is itself a San Diego Historical Society landmark in Old Town. Larry was literate, one of those barroom lions who could deliver accurate thumbnail author biographies on Walter Van Tilburg Clark (The Ox-Bow Incident) and tell you about Jack London's self-mythologizing in ways that kept even the most literarily apathetic drinkers spellbound. I thought about Mr.B. this weekend, remembered that there were people who loved him too and miss him for reasons other than his proletariat American literacy. But, Lord, there was a sense of play in that sad fellow's love of the language and storytelling that I'll wager is missed by more than a handful of drunks.

I wonder if, with age, certain holidays such as Memorial Day take on a resonance unavailable to youth, as this one did with me. Or is it just coincidence and timing? I can almost see Groundhog Day becoming a poignant and bittersweet occasion for me in years to come as it was a favorite movie of a longtime love and myself, now pretty much just friends because of the tyranny of alcoholism and the kind of damage it can do; too much, too late, and irretrievable. The thought gives me an insight into the nature of mercy as it relates to, say, senility and memory: irretrievable as a cosmic kindness. Hey! Thank God it's Friday! (rim shot on snare)