Thoughts of death and dentists banished, I began to focus on my nascent sunburn.

What people read in front of the Hotel del Coronado 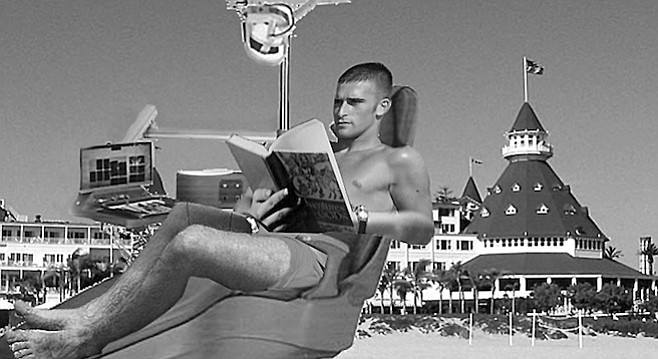 Last Friday I went to the beach for the first time in a year. Why didn't I think of this through the endless, mind-numbing heat wave all summer? I went to Coronado and spread my towel beneath a palm tree near the Hotel Del. A northerly breeze spilling over Point Loma and past the island naval station whipped sand into my hair and teeth and formed a plaster against the sweat on my face and chest. I reversed directions on the towel and sighed, empathizing with the troops in Iraq as I marinated myself in coconut oil and picked up one of my paperbacks. It was The Businessman by Thomas M. Disch.

Disch started out as a literary New Wave science fiction writer in the '60s, and he is also an accomplished poet, having published work in prestigious small press limited editions, university presses, The Paris Review, and The New Yorker. Stephen King (who also made it several times into The New Yorker despite his populist and facile accessibility) once described Disch's work as packed with "morbid, jittery intensity that is quite remarkable."

As I read The Businessman, I was distracted by thoughts of my recent attempts at small good deeds in an effort to compensate for certain character defects. The old saw that "No good deed goes unpunished" occurred to me, and coincidentally I ran into the line halfway through the novel: "The spirit of do-gooding had laid hold of him, a spirit he despised and distrusted, since in the past that spirit had led him from one moral pratfall to another." Was this coincidence a warning to stop lending people money for beer and cigarettes? Who knows?

Baking nicely, I suddenly found myself distracted by the return of a toothache. In the dentist's office, one would do well to imagine oneself on a beautiful beach beneath a palm tree. That's exactly where I was, yet I was thinking about being in a dentist's chair. There is something wrong with me.

The other paperback I had with me was an anthology of poetry about death. Here is Milton:

To live a life half dead, a living death,

And buried, but O yet more miserable!

Myself my sepulcher, a moving grave,

Buried, yet not exempt

By privilege of death and burial

From worst of other evils, pains and wrongs,

But made hereby obnoxious more

To all the miseries of life,

I intend to re-read Paradise Lost. I read it in high school and thought it "neat," the word I probably used back then. I didn't understand half of it, but I liked the vibe. Among the poetry was something by Thomas Lovell Beddoes, early 19th Century, and along the same ghostly lines:

Lie of my eyes begone! Art thou not dead?

Are not the worms, that ate thy marrow, dead?

What dost thou here, thou wretched goblin fool?

My brother Paul, dead for three years, was with me now, and my parents. Also an editor and writer I knew and loved for 17 years, Judith Moore, who recently passed away. No reason to fear Paulie or Dad nor Judith, but the wraith of my mother, Mary Jane, still scared the crap out of me. "Get off the beach, M.J. You're likely to get harpooned by the spirit of some drowned whaler." She is still fat in the afterlife and reliving her sins like Dante had it. Snap out of it. See what other people are reading.

I walked from the palm tree line to the lifeguard tower and a little beyond. People will read on the beach when ordinarily they "don't have the time." I passed a woman reading Us magazine about Brad Pitt and Angelina something. The whole issue was about celebrity couples I never heard of. I headed north or northwest, I suppose.

Two people reading The Da Vinci Code: one of them in Spanish, Codigo da Vinci. I didn't bother to stop and discuss it with them. I haven't read it, but the thing has had so much publicity I feel like I have and don't much care how close Jesus was to Mary Magdalene, only that he was, along with everybody else. A guy reading James Patterson's Cat & Mouse. Not much to discuss there, I figured. I read one of his, a collaboration with somebody else whose name appeared in smaller letters than Patterson's on the cover. The Jester was the title, and it took place in medieval Europe. Not bad, but forgettable.

I found a very pale woman with thick eyeglasses and a mouth like a lamprey's reading Margaret Atwood's The Handmaid's Tale, which I had read and enjoyed. I asked her what she thought. "It's very good," she said, and I agreed. I then asked her to refresh my memory on certain plot points. She was good at it, and I figured she was a schoolteacher from the Midwest, but she was actually an accountant for Target and lived off Midway Drive. She told me her name but I forgot it and didn't have my tape recorder. Hope she doesn't read that crack about her mouth.

I might have walked a half mile before I saw anyone else reading anything, but then I found a heavy set 20-ish guy with a ponytail reading a science fiction novel by Larry Niven, A Gift from Earth. Being a one-time science fiction fan and writer, I asked him about it. He went on in such detail that I was convinced that, were there such a thing as a starship, this kid could drive one.

Thoughts of death and dentists banished, I began to focus on my nascent sunburn instead of the toothache. Grateful for one more symptom to feel miserable and sorry for myself about, I returned to my towel and fell asleep for 45 minutes. Truly burned now but somehow looking dyed rather than sunned, I tried to make it to the water's edge and immerse myself. Without my shoes my feet proved to be too city tender to negotiate the sand and distance.

With a hotfoot from head to toe, a toothache kicking into higher gear, and poetic thoughts of death and even more dread of dentistry, I boarded the 901 bus back to town, probably as happy as I've ever been. Of course, the new prescription of antidepressants had kicked in a couple of days ago, and it was tough to feel bad about anything.

So I felt bad about that.