“What happened to your shorts?”

The women in the Reader front office: "I'm sorry, he's unavailable. In rehab again, you know." 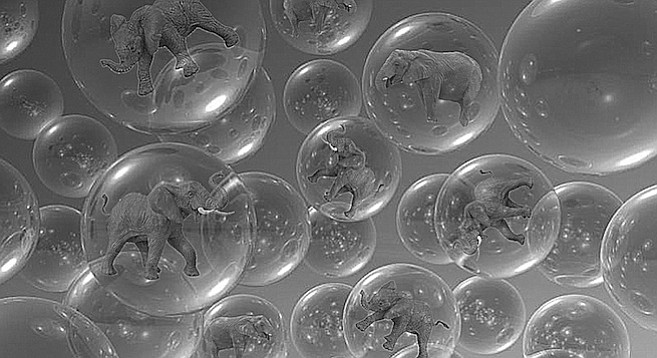 Let me tell you about my leave of absence. Like you're dying to know. One letter poured in. It was hard to tell exactly what the writer was trying to express as it was written in crayon or possibly lipstick, but he seemed to miss the column -- at least I think that's what the message was. The obscenities indicated his anger at my leave-taking. Jetting to Aruba is tiresome, uncomfortable, and annoying. Especially if you're sitting next to a shower curtain salesman for motel chains who wants to tell you every fascinating aspect of the job. Airline peanut bags are still as hard to open as ever, and airport security -- well, you probably know. Aruba isn't what it once was, but you can still find good seafood restaurants. A good steak? Good luck. There are a lot of Germans there, as obnoxious as Americans or Australians (who are essentially Americans in training).

The flight back to the West Coast was relatively painless. I slept through most of it and missed a screening of Corky Romano, which I will grieve about on long winter evenings.

The baths at Esalen are soothing still, even more so after a two-week bout of drinking in Aruba. In Big Sur I had switched to bourbon (far more reliable than grappa and absinthe, which is cheap in Aruba) and plenty of it. I saw flying saucers over the Pacific from my hot tub one night in Escalon. Though you might be tempted to attribute it to the bourbon, they were as real as taxes to me.

One more stop via Aero Mexico to Puerto Vallarta, with a nasty hangover that tequila soon quieted. I found it to be hot as hell, naturally, but no more so than San Diego this summer, I understand. I tried to find Carlos Murphy's to sit in Richard Burton's chair or maybe Liz Taylor's, but I found myself staggering a little bit and the old eyesight was revealing two of everything, so I never made it. Maybe it's not there anymore. I spent a lot of time on the beach with Coronas and sport a George Hamilton tan even now.

Just kidding. I've been in rehab again. I can just hear the women in the Reader front office answering phone calls for me, saying, "I'm sorry, he's unavailable. In rehab again, you know." And anyone who knows me would just nod and say, "Right, okay."

Rehab is great for stories. Half of them are codswallop about crimes that may or may never have happened. But one guy, a stand-up comedian named Bo or Beau, who can't get on stage sober, had a story I believed wholeheartedly. It was about a night drinking with the boys in Mission Beach and he blacks out, only he's got his passport with him somehow in his back pocket. The boys decide to take a vacation right there on the spot, and Bo wakes up in Jamaica, only he thinks he's in Mission Beach.

The beach looks a little different, and the people sure as hell look different. He sees a lot of black people and a lot of Rasta locks. He sees what looks like a Denny's, only the lettering is odd. Bo doesn't feel too good. He's got about $100 in his pocket, and he looks for a liquor store to get a bottle and get his act together. He finds one and purchases a bottle of rum that is cheap. The change he gets back looks odd, but what the hell. He downs a good bit of the contents and stands in front of the liquor store and shouts, "Whoo-eee! Yes!" Then he looks for a bus to take him to La Jolla.

He actually finds a bus in pretty short order but is mildly surprised at the number of chickens on board. He accepts this with the philosophical aplomb of the snot-slinging drunk.

Working through the bottle on the bus, Bo gets very unsteady. His head is wobbling this way and that, and he's pretty much falling out of his seat. The guy behind him either takes pity on him or gets thoroughly annoyed and ties Bo's head to the headrest with a sweater. So Bo's sitting there wondering why he can't move -- thinks he's paralyzed, a stroke or something. By the time he figures out what's restraining him, he has to take a leak pretty badly, and he's about to barf, probably simultaneously. He's got to get off the bus. He works his way loose from the sweater and staggers to the front of the bus, yelling, "I gotta get off!" He's making such a scene, the bus driver pulls over.

So, Bo stands on a street corner throwing up. His unit is out of his shorts, and he's spraying all over everything, including himself. Through some act of God, he is directly in front of the hotel where his buddies are staying. He sees one of them just a few yards away and he's brought inside.

"Where the hell have you been, Bo?"

"Where the hell have you been? And where's my luggage?" By this time he realizes he's not in Kansas anymore.

"You didn't bring any. You came just like you are."

"What happened to your shorts?"

"I peed on them. You got any extras?"

Bo found his return-trip ticket in his wet shorts. The ticket's soaked too. So he makes it back to San Diego and does his gig at the Comedy Store -- but drinking so much bourbon to do it, he checks himself into rehab.

How did I really get to rehab? Don't ask. I'll tell you that it had to do with an initial bottle of Stolichnaya vodka and went on from there. Why did I do it? Sorry, there's no good answer there; it's the way it is with me, but it doesn't have to be. This thing can't be cured, but it can be what they call arrested, and I know empirically what that means.

The gift of alcohol: it just keeps on giving.