Climb to the summit of Calabasas Peak in the Santa Monica Mountains and enjoy far-ranging views of the San Fernando Valley.

The climb to Calabasas Peak appeals to both exercise-minded folks and landscape photographers. The non-trivial gain and loss of 1000 feet of elevation makes a great workout, and the geologic formations you pass along the way are some of the most photogenic in the Santa Monica Mountains. An early or a late start is almost always preferred over a midday excursion. It's cooler then, and photographers will appreciate the three-dimensional effect of low-angle sunlight on the rock formations and the long shadows slanting across the shaggy mountainsides.

From Woodland Hills or Calabasas in the southwest corner of the San Fernando Valley, take Mulholland Highway southwest approximately five miles to Stunt Road on the left. Drive one mile on Stunt Road to a large turnout at mile marker 1.0. After parking in that turnout, which doubles as a trailhead, cross the pavement and pick up the fire road that cuts across a hillside to the north. At 0.7 mile up that road, you reach a road junction in a saddle. You're at the upper end of Red Rock Canyon Park -- maybe worth a visit on your way back from the peak.

Stay left and continue north, wending your way past a fascinating collection of tilted sandstone slabs and fins. These formations (which are even better exhibited in Red Rock Canyon below) tell a geologic story of deposition by gentle currents and massive floods, and later faulting and folding of the resulting sedimentary rock layers. Plenty of recent weathering and erosion has put the final touches on the exposed sandstone.

At 1.6 miles up the fire road, just beyond a couple of horseshoe curves, you reach the summit ridge just south of the Calabasas Peak. The road goes on to traverse the peak's east shoulder, so you leave it (and probably your bike, if you have one) and hop onto a fire break going up toward the peak itself. A low thicket of chaparral guards the rounded summit.

The foreground view features a good dose of newer and in-progress suburban developments spreading into the mountains from the direction of Highway 101 and the San Fernando Valley. On clear days, long views west toward unpopulated parts of the Santa Monica Mountains and east toward the San Gabriel Mountains are inspiring. 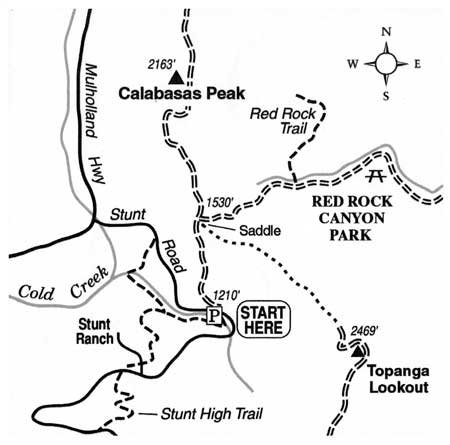