Don’t be afraid of the stay-at-home dad. 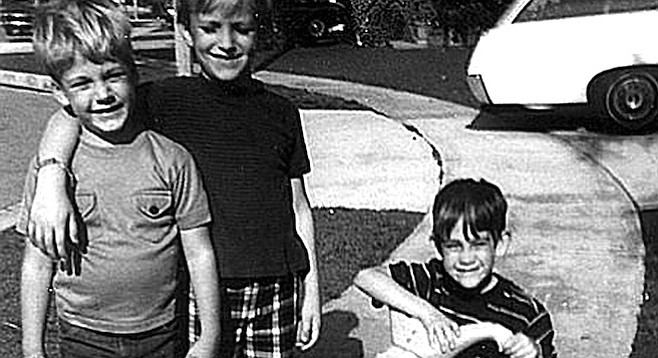 Hi, I'm a stay-at-home dad. Now, before your eyes glaze over and you slowly back away, let me just tell you why I am one. Most boys don't spend their childhood dreaming of one day changing diapers, emptying dishwashers, washing pee-soaked bed sheets, kissing boo-boos, and learning to make chicken broccoli casserole. They want to be firemen, baseball stars, soldiers. As they get older, most men strive for career, status, and a lower golf handicap. Me, I had early dreams of a Hollywood career, collaborating with the likes of Spielberg, Lucas, and Coppola. Later, after grad school, there were visions of corporate ladders and hostile takeovers. But once my first child was born, everything changed, and my focus was placed squarely on the infant in my arms. Soon, my wife and I realized that one of us had to be home with him permanently. By financial default (my wife made more money than me), I was the lucky winner. At first I had no idea how to be a father. Not having one around as a kid, I had no male role models to look to other than the ones I'd seen on TV. So I thought, "What would Charles Ingalls do? Or John Walton? Mike Brady? How about Darren Stevens?!" Actually, I discovered a really good role model on TV in Fred Rogers. I listen to him most carefully still. He's not just talking to pre-schoolers when he smiles into the camera and doles out sage advice... He's talking to us grown-ups too when he says things like "You don't have to look like everybody else to be acceptable and to feel acceptable." I learn a little wisdom from The Neighborhood most every single day. Plus, it's fun to see how graham crackers and crayons are made.

So I found myself in this new role, and it didn't take long to discover that it's one of the most difficult, exhausting, emotionally-draining jobs in the world. It's also the most rewarding. I get paid with hugs, smiles, and the occasional funny quote from my kids, like when my son learned that some animals are herbivores and some are carnivores, so he figured, "Hey, Daddy, I'm a Candyvore!" I can't think of anything else I'd rather be doing than to be my kids' dad. It's how I introduce myself to people when they ask what I do for a living. And it sure feels good to say that. I must be pretty good at my job, since just the other day my son said "When I grow up I want to be a daddy too!"

Taking on the role of Daddy meant giving up a few other things that once defined me, including a few friends who didn't understand why I was no longer sitting at a desk and earning an income. But I don't really miss the old life. This new one brings new adventures and challenges every single day. And I go out and solve the problems and figure out the challenges, every now and then seeking advice from the memory of some old TV show, like Little House on the Prairie when my daughter tells a fib, or The Brady Bunch when my son teases his sister.

I've long given up attempting to explain to people I meet what I do and why I do it. Most folks just don't understand. They're either confused, condescending, or highly critical. Surprisingly, stay-at-home moms are the worst, almost like I'm attempting to gain membership into their exclusive club. The moms don't accept me, the dads don't understand me. Luckily I meet enough welcoming parents, including other stay-at-home dads, who also realize that having one parent at home with the kids is the best way to raise them. Daycares are fine for single moms and dads who have no other support, but when a child has two parents in their lives it should have at least one of them as the daily caregiver.

So, I'm a stay-at-home dad. You don't have to be afraid. You don't have to feel sorry. I love what I'm doing (except for folding laundry) and, more importantly, I love my kids. Doing right by them is just about the only thing that's really important to me. Why would I want to do anything else?