There will be plenty of pain today 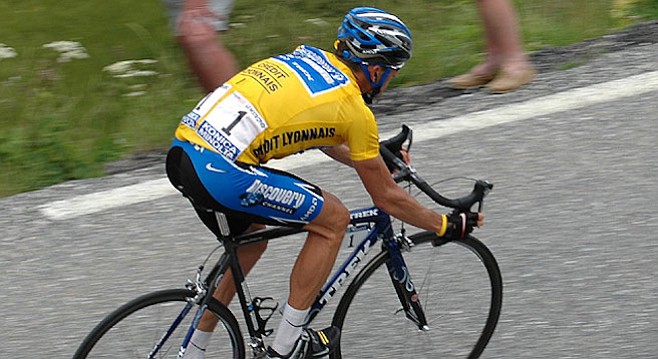 The phone rings, I pick up and hear, "Feel like dinner? I'm in town." This is the familiar voice of Michael Bogey, travel junkie and adrenaline addict. Bogey likes fast. He's raced motorcycles in Africa, go-karts in France, trekked Nepal, ran rivers in Indonesia, raced snowmobiles in the Arctic, and came within one-hairpin turn of making the U.S. Olympic luge team. He's a downhill skier, airplane pilot, charter boat captain... we can stop here. Nowadays, he lives in Fairbanks, and, once a month, flies south to race cars.

I say, "Can't make dinner tonight, but I'm following the Tour this year. Come by tomorrow morning at 5:30, watch the race over breakfast."

This is fortuitous. Michael has bicycled Europe a dozen times, and has ridden over many of the same roads the Tour de France uses.

I haven't seen Bogey in seven months, which is unusual. Last time he was here his right foot was flapping as he walked. He had the gait of a clown wearing oversized clown shoes. Turned out, his Achilles tendon was detached. He still raced cars that weekend, then flew to Miami, lined up a surgeon who services the Miami Heat basketball club, and got tacked back together. I don't know why Miami.

By the way, the injury was not a result of a race accident, Michael has never been hurt while racing anything. He fell off a milk carton while rooting around in his bedroom closet.

I hand Bogey a cup a coffee, return to the stove to chaperon bacon, sausage, eggs, and home fries. Michael settles in before the TV. I propose the day's bet, "Who will win Stage 10, Lance or Anybody Else?" Michael takes Lance for $20.

I ask, "How did you come into bicycle world?"

"I was running 10 miles every day and one day my knee locked up. A friend set me up with a bike."

"What year was that?"

I note that Lance's team, Discovery Channel, is running in front of the pack. Surprised they moved this early. "What do you like about bicycles?"

Bogey says, "It's an elegant way to travel. You're going 30 miles-an-hour. Your body is making that happen. You get a beautiful workout and your work is rewarded by traveling amazing distances, thousands and thousands of miles." Bogey smiles, "Freedom."

We eat breakfast, have more coffee, and I commence clean up. Now and then I hear a race commentator, each time referring to Lance Armstrong, using phrases like, "Delivering misery." "Mass destruction by the terminator." "Sets a pace going up the mountain that will asphyxiate his rivals." "Bone-crushing tempo."

Michael says, "Yes, the first time was the year [1986] Greg LeMond won the Tour de France. My girlfriend was going to cooking school in London. I set off from London on a three-month biking tour. I had three goals. I'd read a lot of M.K. Fisher for food and so one goal was to follow her trail through the provinces of France. And then I wanted to see Tuscany and Florence. And finally, I wanted to climb as many Alpine passes as I could."

"Three months is a long time to have your butt on a bicycle seat. What was the best part of the trip? The worst?"

"Pretty much all good," Michael says. "Funny things happened. I took a ferry across Lake Lagano and climbed two long Alpine passes to the Rhone Glacier. It was snowing on the top of the passes. I hooked up with this German guy for the decent. We were flying, it was foggy, no guard rails, no protection, 1,000-foot drops into the valley.

"Got to the bottom. The pass ahead was grim looking, very steep ascent with lots of switchbacks. I'd been climbing all day and here was another difficult climb. I finally said, 'Okay, I'm going for it,' It was 4:30 in the evening. I went into a shop, ate a lot of sugar, drank a lot of soup. I walked out to get on my bike and there was this one shaft of sunlight coming into the valley. I saw a silver 250 GTO Ferrari sitting across the street. I was fixated on the light and the gorgeous Ferrari and all of a sudden I heard bike brakes. I turned and saw a bike shooting out of a tandem, coming at me at 50 mph. It stopped two inches from my toes. It was Simon, the guy who set me up with my first bike, and his girl friend. An extraordinary piece of timing, you couldn't calculate the probability of it. We decided to go to the Tour de France."

Next week: Lance mutilates the field. Michael does the Tour.