The whole of the L.A. Basin lies at your feet when you're atop Mount Lowe.

Mount Lowe is only one of many named summits in the so-called Front Range of the San Gabriel Mountains overlooking Pasadena and the rest of the vast Los Angeles metropolitan region. Its strategic location, affording a panoramic view as well as easy access by way of a short trail, makes it a preferred destination for anyone seeking a quick summer escape from the smoggy basin below. Arrive at the trailhead -- barely a half-hour drive from such communities as Pasadena and Glendale -- by 6:30 p.m. in July, and you'll have plenty of time to hike to the summit and enjoy a sunset spectacle. Don't forget a flashlight for the hike back!

To reach the starting point from San Diego, drive north on Interstate 5, passing downtown Los Angeles. After a few miles, head north on the Glendale Freeway (Highway 2) and continue through Glendale. When you reach Interstate 210, choose the eastbound direction. Exit one mile later at Angeles Crest Highway (the continuation of Highway 2). Proceed up Angeles Crest Highway for 14 miles to Red Box Divide and turn right on Mount Wilson Road. Drive another 2.4 miles to a large roadside turnout/parking area at unmarked Eaton Saddle. You will need to post a National Forest Adventure Pass (the same one that is valid for national forest lands in San Diego County) on your car for the privilege of parking.

Walk past the gate on the west-side turnout and proceed up the dirt road (the Mount Lowe Fire Road) that soon starts carving its way under the precipitous south face of San Gabriel Peak.

As you approach a short tunnel (0.3 mile) dating from 1942, look for the remnants of a former cliff-hanging trail to the left of the tunnel's east entrance. At Markham Saddle (0.5 mile) the fire road starts to descend slightly. Don't continue on the road. Instead, find the unmarked Mount Lowe Trail on the left (south). On it, you contour southwest above the fire road for about 0.6 mile, and then start climbing across the east flank of Mount Lowe without much change of direction. At 1.3 miles, make a sharp right turn. Proceed 0.2 mile uphill, then go left on a short spur trail to Mount Lowe's barren summit.

If you care to extend your hike, try the Mount Lowe "east" and "west" trails, which completely encircle the upper slopes of the mountain. Mount Lowe was the proposed upper terminus for the Mount Lowe scenic railway, which operated around the turn of the 20th Century. Funding ran out and tracks were never laid higher than a resort called Ye Alpine Tavern (today's Mount Lowe Trail Camp), 1200 feet below. During the railway's heyday, thousands of people disembarked at the tavern and tramped Mount Lowe's east- and west-side trails for world-class views of the basin and the surrounding mountains. Some reminders of that era remain on the summit of Mount Lowe and along some of the trails. Volunteers have repainted, relettered, and returned to their proper places some of the many sighting tubes that helped the early tourists familiarize themselves with the surrounding geography. 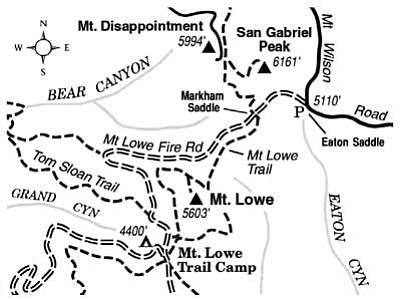