A synagogue doesn’t take all of the Torah literally 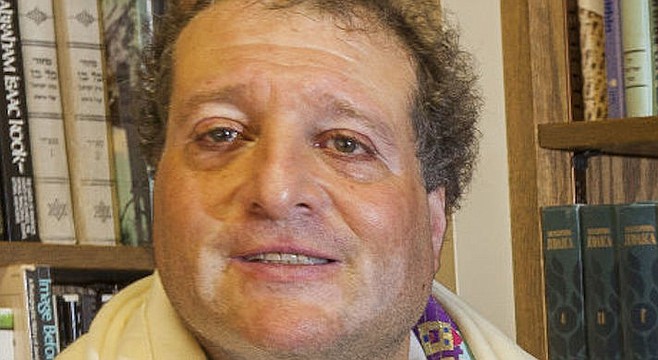 Rabbi Jeff Lipschultz, a barrel-chested man, welcomed the congregants by name as they walked in for Shabbat Service at Temple Beth Sholom. A conversation began about the possibility of new chairs for the temple. Lipschultz mentioned that with the new chairs, the synagogue should rearrange the room around to face east. "All synagogues should face towards Jerusalem," Lipschultz reminded the congregants. Last Friday's Shabbat Service of 15 people was led by Rabbi Lipschultz. Judy Levy served as guest cantor. The songs were sung in Hebrew with responsive readings in English. Lipschultz delivered a message that encouraged a greater tolerance of differences. "Our country, Israel, recently passed a law to remove Jews from the Gaza Strip. Out of a population of 2 million, only 80,000 were Jews, but they owned over 40 percent of the good farmland. This causes a great resentment toward the Jewish people. Many people in Israel didn't agree with this decision, but it is the right thing to do." Lipschultz connected this expression of tolerance with his experience in America. "[Jews] don't celebrate the religion of the majority of this nation, but we can celebrate America and find our place to serve and live out our role. We should choose to live our life as an example of our differences. Tolerance and the values of America should be a shining beacon of freedom to the rest of the world."

After service, Lipschultz said his family is scheduled to leave for a three-week trip to Israel. "Our body may be in America, but our spiritual heart will always be in Israel. It is important for every Jew to go to Israel." Lipschultz is active in his pro-Israel promotion. "Pastor Leo Giovinetti of Mission Valley Christian Fellowship and I were on Fox News a couple times because of his pro-Israel activities. Giovinetti even invited me to The Passion of Christ, which was a great honor, even if I disagree with the movie's interpretation." Lipschultz said he knows Pastor Giovinetti is pro-Israel because Giovinetti believes Israel is a central factor for the End Times and the final battle of Armageddon. This doctrine is known as Dispensationalism. Dispensationalists are not necessarily fundamentalists. It is more an interpretation of how God interacts with mankind. They believe God has two separate plans for salvation, one for National Israel and one for the church. "I am grateful that Pastor Giovinetti donates millions of dollars for Israel. I don't believe in the [Christian] Messiah. I believe the [Jewish] Messiah will come one day to ignite Judaism and bring world peace. He won't be divine, but He will be the anointed one of God. Because of the Messiah, war will cease to exist and everyone will recognize the oneness of God."

This view of the Messiah is not a universal belief in Judaism. "I don't believe in the literal messiah," said Barry Scher, a congregant. "I think it is nice to have [Christians] giving contributions to Israel, even if their hope is that all Jews should gather together in Israel before their final destruction." Judy Levy, the cantor, said she does not believe in the Messiah either. "I believe it will be a Messianic time of peace, rather than an individual Messiah." Next week, in Lipschultz's absence, Judy Levy will serve as rabbi. "When I grew up, the idea of a female rabbi was blasphemy. It is becoming more allowable to have a woman lead service in the last few years." Temple Beth Sholom allows women to serve as cantors and rabbis. "We are a liberal-minded community open to new interpretive elements," said Rabbi Lipschultz.

Lipschultz said that this liberal-mindedness caused a rift between him and Pastor Giovinetti. "We were on the Fox News panel two months ago with Father Joe and the topic came up about homosexuality. Our synagogue is part of the conservative movement, which is very much open to all people. We don't discriminate against homosexuals," said Lipschultz. "Pastor Giovinetti was horrified that I don't consider homosexuality a mortal sin. He's very anti-gay. He told me my own law considers homosexuality a sin in the book of Leviticus. But [our synagogue] doesn't take things of the Torah literally. Regardless of what Leviticus says, I believe discrimination is wrong. After this, Pastor Giovinetti refused to be on the same stage as me. He rescinded a scheduled event where we were going to speak on intolerance. It scared me to hear such hatred in a person's voice. It was all about fear and intolerance. Homosexuals were side by side with the Jews in the Holocaust concentration camps. This hatred and intolerance is the same that the Nazis acted on."

I asked Lipschultz what he believed happens after a person dies. "I don't know. I believe in the afterlife. It's wrong to say anything is absolute," replied Lipschultz. "If someone doesn't believe in Judaism, they don't go to hell. That would be absurd. Hell is what you make it. Bad people won't be punished for their sins. Hell is to teach us and rehabilitate people, not to punish them." Judy Levy added, "In Judaism, the afterlife isn't a rigid concept."