He understands a ballad is not an opera. 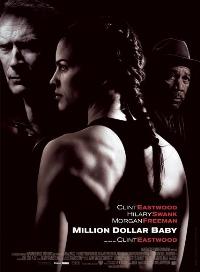 Kudos have come raining down on Clint Eastwood in monsoon proportions. If these are perceived to be a little excessive for his latest directorial venture, Million Dollar Baby, it would be hard to begrudge him. He had to wait longer for his due than he should have. Today he stands as something like the dean of the Hollywood film industry, its supreme lord and master, a footing impossible to have foreseen around the time of Heartbreak Ridge, Pale Rider, Sudden Impact, in the mid-Eighties. From my perspective, no American filmmaker since Griffith, before his decline in the mid-Twenties, or in other words a bit before my time, has so towered above his compatriots. (Sure, I exalt the Coens. They have maintained, by my calculations, a higher batting average, albeit through fewer than half as many at-bats, but they have not attained as high a stature. And there are worrisome signs of a slump. Let's not get ahead of ourselves.) Griffith and Eastwood, a distant tandem, are of course very different cases. For the former, film was in its infancy and competition was thin; for the latter, film has slid into a state of decrepitude -- affluent decrepitude, but decrepitude all the same -- and competition is once again thin. Griffith was inventing an art form; Eastwood is conserving it. And unlike the fading Griffith, Eastwood has pulled away from the pack with a late surge and a second wind.

It would have been understandable if, after the exertions of Mystic River, he were to have reverted to the relaxation mode of Blood Work, Space Cowboys, True Crime, Absolute Power, steeply downhill from The Bridges of Madison County, A Perfect World, Unforgiven, and White Hunter, Black Heart. For a while, it would appear he had done just that. Million Dollar Baby sets up as a nice, light workout of fight-film conventions, smooth and steady, barely breaking a sweat. Eastwood, back in front of the camera as well as behind it, plays the Irish Catholic proprietor of a seedy L.A. gym called the Hit Pit, a seasoned manager, trainer, and cut man, lately cutting back on his own workload, with a current stable of one fighter, an up-and-comer impatient with the cautious, even timid, approach of his veteran handler. When the fighter jumps to a new manager who promises a shortcut to a title shot, the Eastwood character has little to do but nurse his wounded feelings and go back to reading his Irish poets, studying Gaelic, attending church regularly and peppering the priest with pesky theological questions, while the priest counterpunches with needling recommen- dations that Eastwood write his weekly letter to the grown-up daughter with whom he has lost touch. The only solid relationship in his life is the bickersome one with the gym's live-in janitor, Morgan Freeman, an ex-boxer who lost an eye in his last fight (replaced by the mismatching blue one) and keeps the other eye on the habitués of the Hit Pit.

But a new relationship looms: an eager-beaver female fighter from the Ozarks, Hilary Swank, who wears down Eastwood's initial objections to training and managing her: first, that she's a woman and boxing's a man's game; second, that she's already too old: "You wouldn't start training to be a ballerina at thirty-one." With the defection of his only fighter, however, he eventually relents. Lets down his guard. Admits into his life a surrogate daughter who in turn needs a surrogate father. The film turns out to be more than just an old-fashioned fight film; really more a relationship film.

Watching two old pros such as Eastwood and Freeman, two old co-stars from Unforgiven, spinning out their lines, making them their own, is a pleasure of a high order, Eastwood a little more cadaverous now, a little creakier in movement, not having an easy time of it kneeling in prayer at his bedside, but still impish in his prickly delivery of a barb or a zinger, and Freeman matching him jab for jab as a verbal sparring partner: "Why don't you talk a little Yeats to her? Show her what a treat that is." I have some reservations, on the other hand, with Swank, beginning with her hackneyed redneck accent, extending through her Minnie Pearl exuberance, and ending with her slender but knotted physique: if a cut torso were the measure of a prizefighter, Ken Norton would have been the premier heavyweight of his day. I also have reservations -- the usual ones of bookishness and uncinematicness -- with the voice-over narration recited by Freeman ("People love violence..."), although these are swept away in the end when we realize that he has not been addressing us directly, but rather that we have been eavesdropping on a private communication.

And -- a bigger reservation -- the boxing, almost inevitably, is ridiculous, a blur of first-round knockouts, two punches, three punches, in total contradiction of the heroine's handicap as a late-starter. (Far greater tension and excitement are generated when Freeman, seeing that Eastwood is once more bringing his fighter along too slowly, goes behind the back of his best, his only friend, and tries to broker a deal with a new manager.) Even during this whirlwind of success, though, the seed of something more has been planted. For a stepping-stone match in England, the wily old trainer, the student of Gaelic, confers on his protégée a new silk robe emblazoned with a new unpronounceable nickname, "Mo Cuishle," which the local audience evidently understands but which the fighter herself does not. The trainer pledges to tell her what it means once she becomes champion. Her chance at that, when it comes, is ridiculous in a different way: a fearsome adversary, like Mr. T in Rocky 3 or Dolph Lundgren in Rocky 4, whose curriculum vitae as a villain consists of her previous employment as a German streetwalker (great training for an athlete!) and her history of dirty tactics in the ring, and who, in reality, would have forfeited the bout by disqualification after our heroine momentarily forgets the first rule of boxing: "Always protect yourself." (First rule of life, by extension.) At that point, the film takes an unexpected, if not unprecedented, turn. It takes us, in the common phrase, from the ridiculous to the sublime. Or pretty close.

While it is not nearly as ambitious, not remotely as career-defining, as Mystic River, it proves in the last analysis to be a film of remarkable gravity and bravery. No quick knockout itself, it is more like a late-round TKO, a well-paced war of attrition. You will likely feel, at the completion of Eastwood's standard two-and-a-quarter hours, that you have come down a long road; been somewhere; been through something. The director, as always, takes his time yet doesn't linger, doesn't build things up too big, doesn't bleed them dry. He understands the value of understatement. He understands a ballad is not an opera. And where he, in the excruciatingly emotional Mystic River, sent out Sean Penn, Tim Robbins, and Kevin Bacon to do his crying for him, he here dares to give it a try himself, and he does quite all right at it. (I am purposely withholding the particulars of the plot. I will say only that when he gets around to telling his protégée the meaning of "Mo Cuishle," tears will be brought to plenty of other pairs of eyes as well.) Significantly, Eastwood's tears are shed, in the presence of a priest, over the prospect -- the very thought -- of taking another life. He thus continues his self-imposed penance over the bodies he has left littering the screen in his wake. Which is to say, the wake of the Man with No Name, Dirty Harry Callahan, Josey Wales, et al. More than just the custodian of classicism in Hollywood filmmaking, Eastwood has become -- in the broadest, most inclusive sense, not strictly a moral sense -- the conscience of American cinema. No one else has applied for the post.