All the Kids Are Doing It 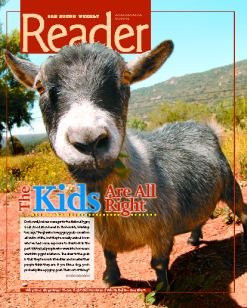 "It seems like you either fall into the screamo genre and everyone likes you or people don't care," says Dave Werth, the singer for Killfast Casino. He defines screamo as "punk music...mixed [with] pseudo-emotional lyrics that make 12-year-old girls cry. The songwriting seems lacking."

Werth describes the formula: "Effeminate males using every stage trick in the book -- cartwheels, spin kicks, leapfrogs. I've seen specials on MTV2 where they have choreographers teaching bands how to act. Screamo is N'Sync and the Backstreet Boys in a punk medium.... Ever since MP3.com launched, there's no more need to go out and tour. You basically go on myspace.com or purevolume.com and set up your band's page. You can sit at home and sell CDs just by adding people to your myspace page. Because the bands don't need to go and tour, it bred a mediocrity in music."

Werth says the screamo phenomenon is unique to all-age venues.

"A lot of non-screamo bands are not finding the success in all-age venues. You have to wonder if it's because the bands aren't fitting the screamo formula that the under-age kids come to expect.... We played one show where, when the kids realized we weren't a screamo band, the place emptied out. Out of 300 kids, 50 stayed."