The long-distance relationship that worked out. 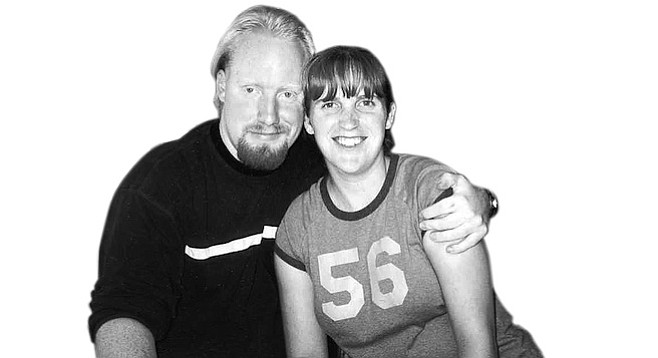 Deanna Johnson and John Beaver look so young, you’d never guess they met nine years ago. “We were in marching band together at Poway High,” Miss Johnson, 23, explains. “We both played sax. I knew John’s sister Sarah from middle school. She was in band, too. I didn’t know John was her brother. After a month marching next to John, I had a crush on him.”

Mr. Beaver’s interest had been piqued as well. He didn’t say anything about it to Sarah or to Miss Johnson.

“When I finally figured out that John was Sarah’s brother, I told her that I liked him,” Miss Johnson continues. “Sarah was all excited. She had thought ever since middle school that John and I would be good together. I told her that I wanted to ask John to the Sadie Hawkins Dance.”

“Sarah came to me one day and said, ‘If Deanna asked you to the dance, what would you say?’ ” Mr. Beaver, 24, remembers. “I said, ‘Why are you asking?’ ” Miss Johnson asked. Mr. Beaver said “Yes.” The couple stayed together all through high school. “We marched next to each other for three years,” Miss Johnson says.

“But I still came home every other weekend.” The following year, Miss Johnson enrolled at San Diego State. During their early college years, Miss Johnson and Mr. Beaver broke up for two years. “We had been together for so long,” Mr. Beaver explains. “We both had some growing up to do. We needed to go our separate ways.” “But we still saw each other with family,” Miss Johnson adds. “We still went out as friends.”

In 2001, Miss Johnson decided to take a year off school and move to Boston. “I had it all set up to do some volunteer work at a health and family resource center in Worcester,” she says.

Mr. Beaver had taken some time off college too. “I was burned out with school,” he explains. “My roommate’s dad was an electrician. He needed some help. So I withdrew from school and worked with him. We did residential — new construction mostly.”

“We ended up getting back together the week before I left for Boston,” Miss Johnson says and laughs.

“I didn’t want to let her go so far away without telling her how much I loved her,” Mr. Beaver says. “We went to La Jolla Shores and had Chinese food.”

“My mom was mad,” Miss Johnson recalls. “John kept me out really late.”

For the next ten months, the couple carried on a long-distance relationship. “It was hard,” Miss Johnson admits.

“We saw each other when she came home for Christmas,” Mr. Beaver says. “And I visited her on her birthday.” After Miss Johnson came back to San Diego in May 2002, she returned to San Diego State. She changed her major to social work. Mr. Beaver returned to UCSD. “Because we’re so young, we stayed in school even though we had talked about getting married,” Miss Johnson says. “We wanted to wait until we were both more established in our lives.”

Two years after Miss Johnson returned from Boston, Mr. Beaver popped the question. “I wrote her a poem,” he explains. “We went to La Jolla Shores on a Thursday for lunch. Chinese food again. I sat down behind Deanna and had her read the poem. When she was done, I opened up the box and handed her the ring.”

Miss Johnson holds up her left hand to show a princess-cut solitaire shining in a white gold cathedral setting. “She started jumping up and down,” Mr. Beaver continues. “She wanted to go get it sized right away.”

“We were supposed to go camping in a week,” Miss Johnson elaborates. “I wanted to tell my family before we left. And I wanted to have the ring when I told them.”

“The jewelry store made it a rush job,” Mr. Beaver says. “She got her ring.”

When Mr. Beaver and Miss Johnson get married in two years, they still won’t be done with school. Mr. Beaver, who does system administrative and technical support for UCSD while he pursues his linguistics studies, plans to get a job in computers after graduation. Miss Johnson hopes to pursue social work and then become a stay-at-home mom.

“We’re getting married at Holy Family Church in Linda Vista,” Miss Johnson says. “It was my grandparents’ church. After my grandma died, my grandpa had some windows put in in my grandma’s memory. I think it will be a nice family touch.”