Blood on the Water

Are great white sharks snacking in our waters? 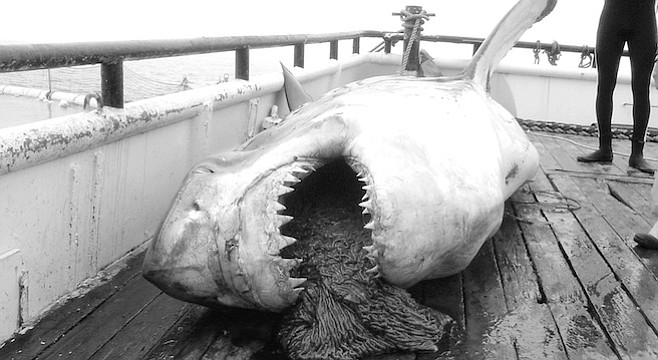 Summer 1999: Local spearfisherman Mark Bucon paddled his kayak three quarters of a mile out into the Pacific from the Children's Pool in La Jolla. Trailing him in a second kayak was a reporter researching a story about spearfishing. But it wasn't spearing fish the two chatted about; it was the city's decision to cede the Children's Pool to harbor seals and sea lions. "It's not a good idea," Bucon said as he tied his kayak to a stalk of kelp. "They're creating a habitat for great white sharks here." 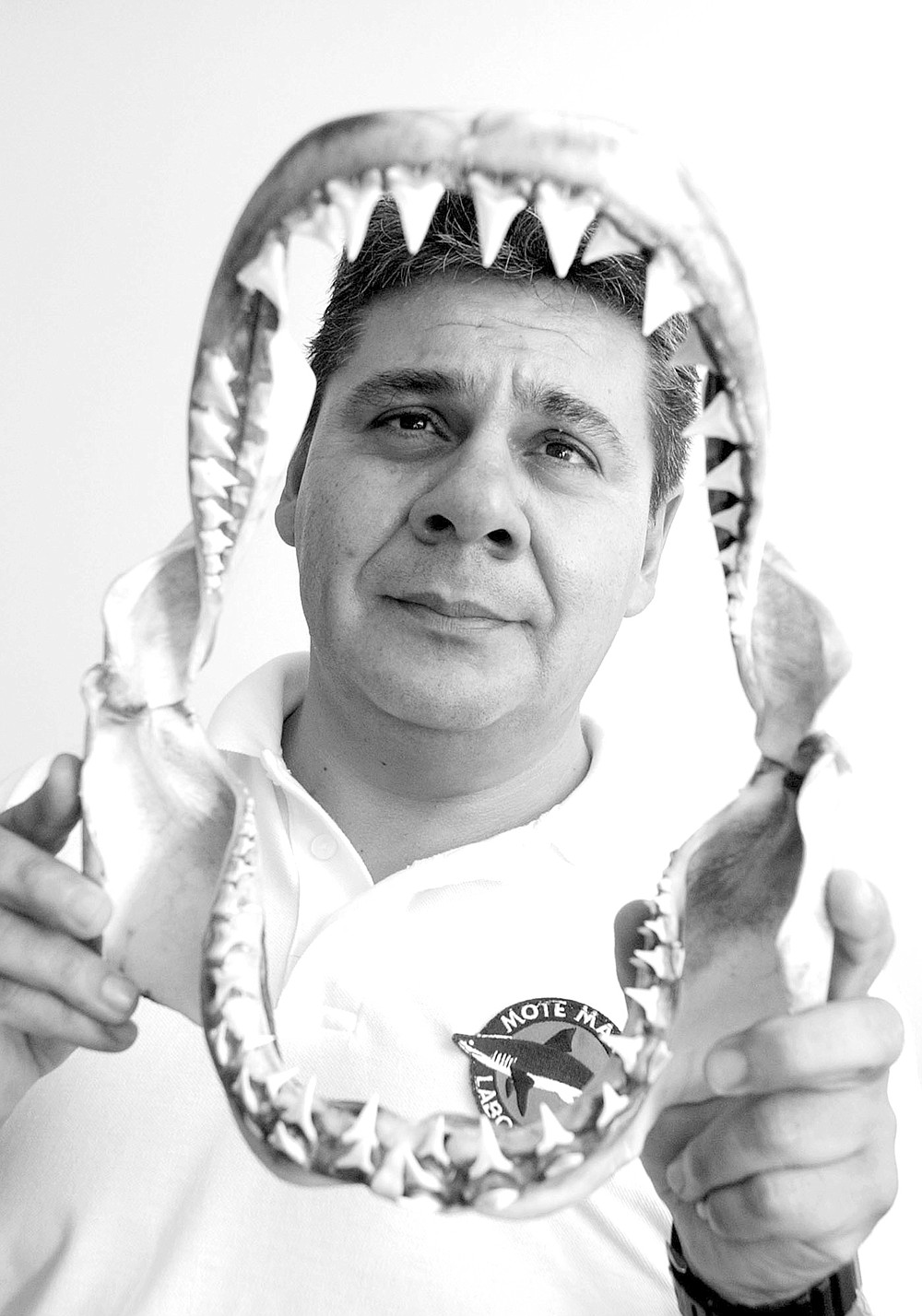 José Leonardo Castillo Géniz: "I got these photos from a friend who works for the tuna farm. That shark was more than five meters long."

"But there are no great white sharks around here, right?" asked the reporter paddling up alongside.

"Oh, there are great whites in these waters," Bucon answered as he rolled into the water. "Tie up to my kayak and let's go."

November 19, 2002: Dan Higgins, a lobster fisherman, was alone aboard his 25-foot boat retrieving lobster traps in the same spot Bucon had spearfished three and a half years earlier. According to Higgins, he was pulling up his last trap when some movement on the water's surface about 30 feet away drew his eye. Suddenly, the spot erupted with foam, and a few seconds later a chunk of sea lion or harbor seal flesh floated to the surface, now colored "bright red" with blood. He believed he had witnessed a feeding great white shark. Motoring to the spot, he saw the chunk of flesh was actually a pup. He figured the pup had been ripped out of its pregnant mother's womb during the attack. As he looked, he saw the shark swim under his boat at a depth of four or five feet. "I'll say it had to be a minimum 14 feet long, maybe as long as 18 feet," Higgins told the Union-Tribune later. "It was 3 to 4 feet wide." 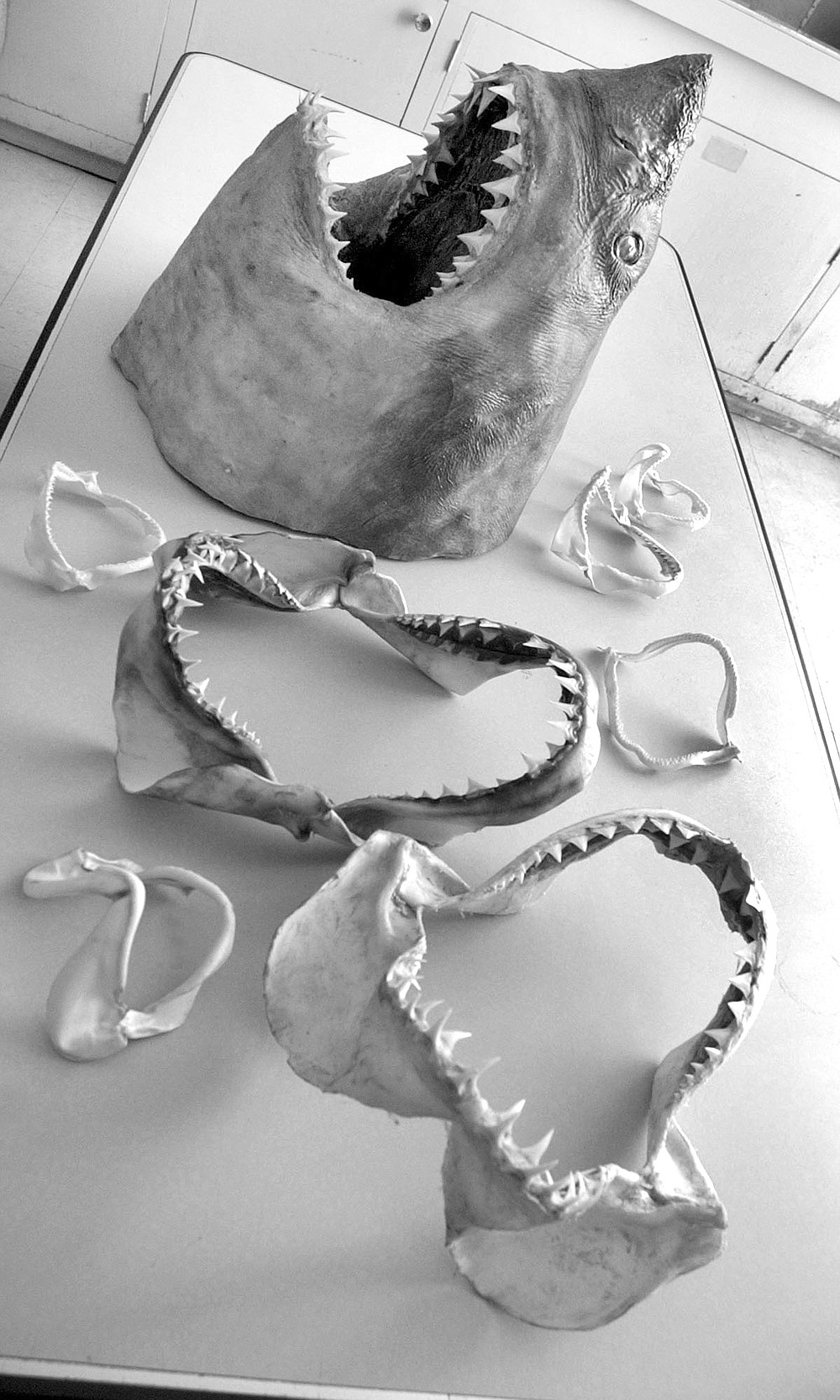 February 2, 2003: Charley Barringer was walking his dog Breezy along Windansea Beach when he saw a group of sea birds clustering above a patch of water 200 to 300 yards offshore, straight out from Nautilus Street. As he watched the cavorting birds, he told the Union-Tribune, he saw "something big" leap out of the water and realized it was a great white. "I saw it come up out of the water several times, including once with an exaggerated head-snapping movement from side to side."

Standing nearby, Steven Dente also witnessed the occurrence. "It was the most amazing thing I've ever seen, and I lived in the African bush for 15 years," he told the U-T.

Dente and Barringer said the attack lasted about 15 minutes, and the former claimed that at one point, he saw the shark rise from below and throw a seal several yards through the air. The attack ended with a wide circle of blood in the water near the spot Barringer first saw the circling birds.

June 2003: A scuba diver leapt into a tuna cage in Mexican waters near the Coronado Islands. The cage was really a net full of tuna anchored there as part of a tuna-farming operation -- a joint venture between Australian and Mexican companies. The diver was performing a check of the net, which involved repairing any damage to the net and chasing out predators, usually sea lions, that had chewed their way in. However, on that day it wasn't a sea lion -- dangerous animals in their own right -- he encountered in the net. It was a great white shark.

September 2004: José Leonardo Castillo Géniz, a shark fisheries biologist with the National Fisheries Institute of Mexico's regional center in Ensenada, sits in an office just off the oceanology lab at the Ensenada Center for Scientific Investigation and Higher Education, where he is a doctoral candidate. On the computer monitor in front of him is a photo of two smiling men standing on the deck of a boat. At their feet, facing the camera: the great white shark the diver found in the tuna cage. (The shark had been shot and killed, then removed from the cage.) The shark's between two and three times as long as the men are tall and a good four feet in diameter. The tuna-farming company did not promulgate the photos or report the catch. "I got these photos from a friend who works for the tuna farm," Castillo says. "That shark was more than five meters long."

Eventually, the photo made its way to El Vigia, the Ensenada daily newspaper, which ran huge-sharks-in-Ensenada-Bay stories for three days in early August. "It's funny," Castillo says, "we've had this photograph since last year. Then suddenly this local newspaper published the picture of this large shark caught inside of the tuna cage, and for three days they published reports, which said this animal came from Ensenada Bay. I called the editor and I told him, 'Come on! That's a lie; that shark was caught in a tuna net 300 miles out to sea and dragged to the the Coronado Islands off of Tijuana.' All he told me was, 'In the last three days, we set a sales record.' "

Castillo believes the alarmism is irresponsible and, worse, unscientific. On his computer, he calls up a chart that shows the feeding habits of juvenile and adult great white sharks. "A white shark when it is born has a size of about 120-150 centimeters, a very large size compared to other sharks. So they have a strong demand for food intake." He points to the chart. "Here we have the juveniles feeding mainly on other small sharks and fishes and maybe some mollusks such as octopus. I believe for this reason it's most possible to find juvenile white sharks in Mexican waters because the Sea of Cortez has a very high concentration of fish and it's an excellent area for the feeding and growing of these sharks. Right now, we are conducting a survey of sharks in the Upper Sea of Cortez. We are working in San Felipe and Santa Clara and Puerto Peñasco. We spent three weeks on fishing trawlers from Puerto Peñasco, and in three weeks we saw three small white sharks in the catches of these trawlers. That was very surprising to us to see those white sharks in the Upper Sea of Cortez. We now know the Upper Sea of Cortez is a feeding and growing spot for these small white sharks. There is so much diversity of fish in that area, and these sharks demand so much energy for growing. But as the shark is growing, it shifts its diet toward bigger animals. It starts to feed on pinnipeds, which is the specific name for sea lions and seals. And also included in the diet are dolphins and porpoises. Also well documented is the white shark feeding on the dead bodies of whales and basking sharks. But pinnipeds make up the majority of their diet, and pinnipeds are concentrated in colder waters north of Point Conception."

Castillo clicks a new chart up onto the computer screen, this one showing a map of the Pacific coast of North America and pinpointing where great whites have been caught and how much they weighed. "We have a strong concentration of white shark catches around San Diego and another around San Francisco. We can clearly see two groups. We have very large sizes north of Point Conception and smaller sizes in the south."

Sea lion and seal populations are increasing in local waters, Castillo concedes, but he says they aren't near levels needed to support a population of adult great white sharks. Other factors make the San Diego-Ensenada stretch of the Pacific an unlikely destination for large white sharks, he adds. "You have to remember that these animals are very fragile in biological terms. Contamination and pollution affect them. We have a high volume of navigational traffic in Southern California and all of Baja. This is a disturbing activity for these animals."

All that data notwithstanding, a great white whopper did show up in a tuna net in local waters. Castillo believes it was an anomaly, not a portend of shark-infested waters to come. "That shark was over five meters," he adds. "That is a very rare size, no matter what region we're talking about."