Weir Canyon Regional Park forms a belt of open space along the south edge of Anaheim -- not the familiar Disneyland/convention center/stadium part of that city, but the Anaheim Hills section, where new and newer suburban homes climb the rounded foothills of the Santa Ana Mountains. The park is contiguous with many thousands of acres of Irvine Company land that has recently been acquired for habitat preservation by Orange County. Presently much of that land is under the interim management of the Nature Conservancy. Weir Canyon park itself is open to passive recreation, primarily by hikers and mountain bikers. They can explore rolling hills draped in sage-scrub and chaparral vegetation, badlands-style cliffs, cavernous sandstone outcrops, and oak-lined ravines.

Three principal entry points serve Weir Canyon park: Serrano Avenue at Nohl Ranch Road, the dead-end of Hidden Canyon Road, and the dead-end of Avenida de Santiago. From the first entry point, a gravel service road just east of an elementary school ascends toward a rocky promontory called Robbers Peak. Its name commemorates the notorious outlaws Joaquin Murietta, Three Finger Jack, and others of the late 1800s. Sweeping down out of the hills, these bandits terrorized the farmers below and preyed upon passengers traveling the Butterfield Stage. From Robbers Peak they could easily spot and evade sheriff's posses by slipping into the rugged ravines and canyons (including Weir Canyon) leading back toward the Santa Ana Mountains. From Robbers Peak, you get an impressive view of the lowlands to the south and west -- a composite of pastoral landscape and spreading suburban sprawl. On the clearest days, the panorama includes the blue arc of the Pacific Ocean and Santa Catalina Island.

The bottom of Weir Canyon itself, managed by the Nature Conservancy, may soon be open to visitation by guided tour only. 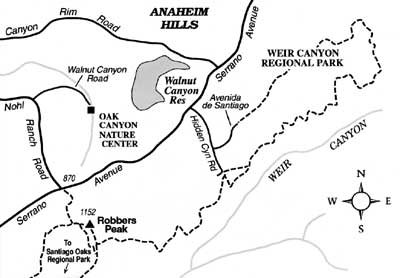