Sherry proposes to Dave...who sleeps on it 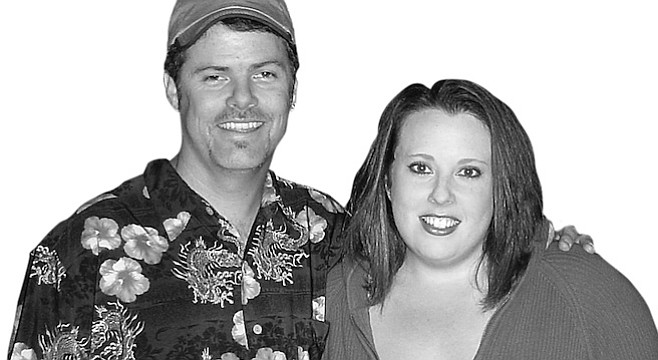 "I’ve always been the gung-ho one,” Sherry Eden says. Sitting on the living room couch in the home she shares with Dave Duncan, Miss Eden, 29, smiles a confident smile. Mr. Duncan, 37, nods his head in agreement.

“My best friend and her best friend got married,” Mr. Duncan says of their meeting. “Kerri and Saul. I was Saul’s best man. Sherry was Kerri’s maid of honor.”

“We did wedding stuff together,” Miss Eden says. “I felt like I already knew him. I had heard so much about him from Kerri. We saw each other for the first time at the rehearsal dinner. Neither of us was looking for anyone at the time. Dave was engaged to someone else.”

“Sherry and I walked together down the aisle,” Mr. Duncan confirms. “And we both had to give a speech at the reception.”

For the next six months, Mr. Duncan and Miss Eden saw each other only every now and then. “I still knew what was going on with him because of Kerri and Saul,” Miss Eden explains. “In February, I heard he had broken up with his fiancée. I was a school-bus driver at the time. For Valentine’s Day, one of the kids on my bus gave me a box of conversation hearts.”

“The little candy ones with the messages on them,” Mr. Duncan says.

“I put a note on the box and dropped it into the sunroof of his truck,” Miss Eden confesses. “The next day when he came out to go to work, he found the box on the front seat.”

For their first evening together, Mr. Duncan and Miss Eden double-dated with Kerri and Saul. “We went bowling at the old Palomar Lanes in Escondido,” Mr. Duncan says. “Then we sang karaoke at the Sunset Lounge.”

“He sang a lot of songs,” Miss Eden says and laughs.

“I asked her what song she wanted me to sing,” Mr. Duncan remembers. “She said, ‘Good Morning, Beautiful,’ by Steve Holy.”

The couple met for lunch the following week at a little Mexican restaurant behind the Foster’s Freeze in Escondido. “At first I didn’t want to jump back into a relationship,” Mr. Duncan explains.

Miss Eden changed his mind. The couple grew closer. Miss Eden bought a brand-new house in Murrieta. While the house was being built, she stayed with Mr. Duncan’s sister. When the house was complete, Mr. Duncan and Miss Eden moved in together. “I knew he was the one,” Miss Eden says. “I just didn’t know if he would ever get around to asking me to get married. So I asked him.

“I bought a ring at LeMasters Jewelers,” Miss Eden continues. “A white gold band. We were at Kerri and Saul’s for a barbecue. I wanted to ask him in front of everyone, but I chickened out. That night we were lying in bed watching TV. When I had gotten home from the barbecue, I’d shoved the ring in my pillowcase. Dave turned off the TV and rolled over like he was going to go to sleep. I thought, ‘NOOO.’”

“It was pitch black,” Mr. Duncan confirms. “She said, ‘Here,’ and handed me the ring in the box. I knew what it was.”

“I made her wait until the next morning,” Mr. Duncan says with a sheepish grin. “When I got up, I came out into the kitchen and said, ‘Of course I’ll marry you.’”

Miss Eden went online and researched the ring Mr. Duncan would buy for her. “I knew I wanted an antique setting.”

“We shopped all day in the Diamond District in downtown L.A.” Mr. Duncan says. “It took eight hours. We went into more than eight stores.”

“We found the stone at one store and the band at another,” Miss Eden explains. “Then we had them put the ring together.”

Miss Eden holds up her hand to show off the antique white gold “hugs and kisses” engagement ring. “There are 40 diamonds around the band, and the center diamond is 3/4 carat.”

Miss Eden, who attends the Royal College of Beauty in Temecula, and Mr. Duncan, who works in screen inspection at the Sony Plant in Rancho Bernardo, plan a small, Friday-afternoon wedding in the garden of a friend in Vista. “She has a really pretty back yard,” Miss Eden says. “We’ll stand underneath the pepper tree.”

“My boys will walk me down the aisle,” Miss Eden says of her two sons, ages six and seven-and-a-half. “I want them to give me away. And my nephew will hold the ring.” For the past year, Miss Eden has taken on the full-time care of her brother’s nine-and-a-half-year-old son.

“We’ll go on a honeymoon to Catalina or Hawaii,” Mr. Duncan says. “Whichever has the better package.