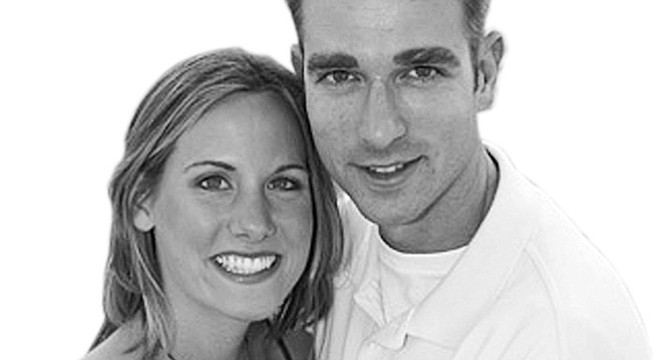 "I want this to be a surprise,” Kevin Leinum says. Mr. Leinum, 28, sits in his office at County Wide Financial in Mission Valley. He glances out the window and lowers his voice as though his fiancée, Breanne Taylor, 25, might be somewhere close by. “I like to surprise people.”

In April 2003, love surprised Mr. Leinum. “I met Breanne at a church function. We both go to College Avenue Baptist. They have a post-college Gen-X service every week called 29-11. One night, I went to the service and then to a Padres game with the people from church. I saw Breanne.”

Mr. Leinum considers him- self a crazy guy. “It’s not that I do a lot of crazy things,” he explains. “I’m just an extrovert. I can talk to anybody. I like to make people laugh.” He saw in Miss Taylor a kindred spirit. “The attraction was immediate. Number one, she’s beautiful. Number two, she’s crazy in the same way I am. I thought, ‘There’s somebody out there who’s crazy, too.’

“We ended up playing volleyball that Sunday at South Mission Beach,” Mr. Leinum continues. “I had told her on Friday that a group of us were going to play. Ordinarily, a single woman by herself wouldn’t show up for something like that. But there she was. She’s really athletic. Did I mention she’s beautiful, too?” Mr. Leinum laughs. “She didn’t remember my name. But we talked again.”

The couple saw each other at the next week’s 29-11. “Then I saw her at an Easter egg hunt at a friend’s house,” Mr. Leinum says. “I asked her if she wanted to play tennis sometime. We played the next week at her apartment complex in Point Loma. Soon after, we went on our first official date.”

Within six months, Mr. Leinum had fallen in love. He knew Miss Taylor was falling, too. “I ended up reading her journal,” he confesses. “In September, she wrote that she was falling in love with me.” Because the couple take their faith and its “call to modesty” seriously, neither one said the “L” word until the night Mr. Leinum asked Miss Taylor to be his bride.

“I had this plan in place for about three weeks,” Mr. Leinum says. “Breanne drove me to the airport at 11:00 a.m. Saturday, May 22. I told her I was flying to Colorado to look at diamonds and settings with her roommate Allison’s mom.” Unbeknownst to Miss Taylor, Mr. Leinum never got on a plane.

“I had my friend Jonathan pick me up and drive me to a friend’s house. I borrowed that friend’s convertible Mercedes. I washed the car and filled it with gas. I picked up some flowers and took them to Il Fornaio in Coronado. I called Breanne at 6:00 and told her I’d gotten safely to Colorado. Then I went to the Top of the Hyatt and waited.”

The previous Thursday evening, Mr. Leinum had asked Miss Taylor’s father for his daughter’s hand in marriage. Mr. Taylor had consented. “So Breanne thinks I’m in Colorado,” Mr. Leinum continues. “I had her friend Mindy take her to the Top of the Hyatt downtown ‘for drinks.’ When they walked in about 7:00, I walked out from behind a short wall. I really surprised her. She started crying. She told me later that she knew right away what was going on. I got down on one knee and asked her to marry me. I had never told her ‘I love you’ until that very moment. I wanted to wait for the right time and place. She loved that we waited to say that to each other. She said she always wanted it to be that way when she was proposed to.”

After Miss Taylor accepted and said, “I love you, too,” the couple went to dinner at Il Fornaio where the flowers waited. “Then we drove to the Loews Resort in Coronado Cays for a gondola ride from 10:30 to 11:30. It was incredibly romantic sitting in the gondola eating chocolate-covered strawberries and drinking Merlot. Afterward, we sat next to a fireplace in the resort and then danced for a little while.”

Mr. Leinum and Miss Taylor plan a November wedding at the Admiral Kidd Club. They’ll have about 120 guests. Mr. Leinum’s youth pastor is flying out from Texas to marry them.

And when Miss Taylor reads this story, she’ll be surprised again. “I’m not telling Breanne about the engagement announcement,” Mr. Leinum says. “We’ll pick up the paper, and I’ll turn to the page, and there we’ll be.”