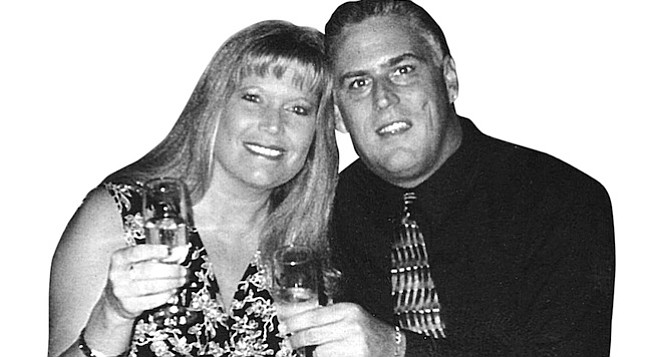 If you’re living in Point Loma and you think the Brady Bunch lives down the street, you might be right. When Michelle Taylor, 45, met Paul Galkoski, 35, three years ago, they each had three kids. “I’ve got Ashley, Brad, and Kimmie,” Miss Taylor explains on a rainy Sunday afternoon. “They’re 20, 18, and 15 now.”

“But Brittany doesn’t live with us,” Miss Taylor explains. “Paul and I met on a blind date. A friend of mine at work had a boyfriend. And that boyfriend was a friend of Paul’s. Our two friends set us up.”

Miss Taylor, who works at Union Bank as a senior customer service and sales representative, was nervous and excited to meet Mr. Galkoski. “I’d been divorced for nine years. And I didn’t date much.”

Mr. Galkoski, who manages a company in Old Town that produces advertising specialty items (magnets, key chains, etc.), liked Miss Taylor right away. “We met at our friends’ house,” he remembers. “Then we went to dinner at Acapulco in Mira Mesa.”

“As soon as we kissed, I knew,” Miss Taylor adds.

“We were dancing,” Mr. Galkoski says. “Things went so well, we drove down to La Jolla Shores.”

“We sat on a bench talking and making out like a couple of high school kids until really late,” Miss Taylor says with a giggle. “We went back the next weekend, too. To the bench.”

The couple started dating. Mr. Galkoski told Miss Taylor that he didn’t want to get married. “I was upfront,” he says. “I’d been married twice before. I told Michelle that if she was looking to get married, then I was the wrong guy.”

Miss Taylor met Mr. Galkoski’s kids soon after. He eventually met hers. “She wouldn’t let me come to the house,” Mr. Galkoski teases. “She was, like, ‘Let’s meet at the Chevron station down the street.’”

“It wasn’t that bad,” Miss Taylor protests. “We liked to do a lot of the same things. Dinner, dancing, movies. We went out to the casinos sometimes.”

In October 2002, the couple went on a vacation to Jamaica with- out their kids. “We stayed at Sandals Royal Caribbean,” Miss Taylor remembers. “It was beautiful. And I just knew Paul was the one. It was my womanly instinct, my female intuition. My kids liked him, and he made me comfortable. He made me laugh.”

Mr. Galkoski took another year to catch up with Miss Taylor. “I remember waking up October 7, 2003, and thinking, ‘I’m going to go buy a ring today.’ I designed a ring and had it made.”

“We went on a cruise for my birthday a little while after that,” Miss Taylor continues the story. “I was in the bathroom getting ready to go out, and Paul was out on the balcony of our stateroom. He said, ‘Michelle, come out here.’ When I went out on the balcony, I could see he was crying. I thought something was wrong.”

“I told her how much she meant to me and that I wanted us to spend the rest of our lives together,” Mr. Galkoski says.

“He pulled out the ring. The box lit up when he opened it. The ring was just exquisite. It was a gorgeous, brilliant solitaire.”

“It’s so clear, it almost looks blue. He had it set in a basket setting. We’re having it redone for my wedding band. Now the solitaire is set in the center of four prongs with leaves coming out from the sides. The leaves are pink sapphires.”

Miss Taylor said, “Yes,” right away. “She ran out in the hall and shouted, ‘I just got engaged!’” Mr. Galkoski says. “For the next seven days while we were on the cruise, she walked around with her hand held out and said, ‘I’m getting married,’ to anyone who would listen.”

The wedding will be this November at the Admiral Kidd Club on Shelter Island. “We’re going to have about 90 to 100 guests,” Miss Taylor says. “And all the kids are involved. My son will walk me down the aisle and give me away. Chantalle will be the flower girl. Trent will be the ring bearer. We got him a little tux. Kimmie and Ashley will be the bridesmaids, and my sister is the maid of honor.”

“Without kids,” Mr. Galkoski adds. He pauses and kisses his betrothed on the cheek. “God brought Michelle to me. He knew I couldn’t raise my kids without her.”

“We needed each other,” Miss Taylor agrees.