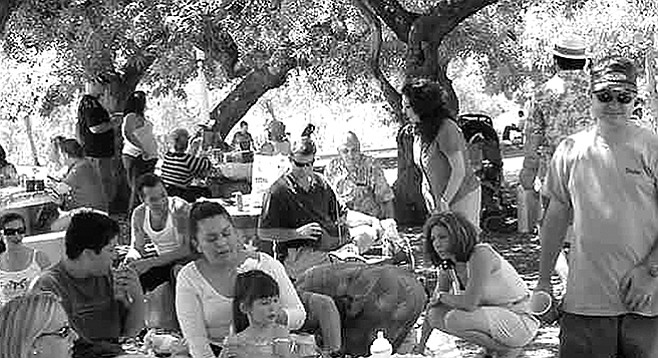 I was invited to a party on the afternoon of a Lakers playoff game. I was bummed about missing the game, but, hey, other people have to go to work digging ditches or swinging hammers. I was going to write about a party. I shouldn't complain.

I was told it was at the Reuben H. Fleet Space Theater In Balboa Park. I went inside, and the girl working there said, "We had two parties, but they both ended 20 minutes ago." I called Brandon, who'd invited me to join his baby's first birthday party. He said, "Oh, I meant that the party was near there. It's the grass area near the parking lot."

I walked over, and the first thing I saw was a big rope on a tree. I asked Brandon what it was for and he said, "It's for a pinata — or my wife if she keeps bugging me." We both laughed. I mentioned something about the Lakers game, and he said, "I already sent two guys to the store to buy batteries for this radio so we could hear it I'm a big Lakers fan too."

The setup in the park was perfect. There were big trees everywhere with lots of shade and balloons tied to them. There were two kegs, a cooler with soda, and a stand with two guys making street tacos. I asked Brandon how much it cost to have those people there, and he said, "It's $650 and they set everything up, cook everything. It would've been more if we had over 100 people." It wasn't 100 people showing up, but 75, that concerned the Parks and Recreation crew. They came over in a truck and were talking to Brandon's wife, Liz. I asked her what was going on, and she said, "They told us if we have over 75 people, we would be fined $300 since we didn't get a permit. I pointed to those benches over there and said that was a different party, even though it's not. I'll have to tell them to pretend they don't know us if that truck comes back."

At the table where I was sitting, everyone was raving about the tacos. I mentioned that a friend of mine always eats them in Tijuana but that I was wary of eating food being cooked on the street down there. One guy said, "Oh, man, you got to. They sell them two for a buck, and they are so good. I've never gotten sick eating them, and I eat about six of them at one time." Another guy added, "I'll just eat the ones they sell at Rubio's for a buck."

To get this location in Balboa Park, they showed up around 8:00 a.m., even though the party didn't start until 1:00 p.m. I started talking to a guy who was about 6'4", and he had showed up at 9:00 to help set up. He worked for the athletic department at SDSU, and we talked a lot about sports. One guy walked up to him and said, "You got here at nine this morning? I'm surprised there's any food left." Another guy came up and said, "I wanted to call you last night I was at this sorority party last night, and there were so many girls. You need to get with the 21st Century and get a dam cel phone."

A few of us would periodically go over to the radio to get updates on the game. The Lakers were losing eartly on.

We went back to the taco stand. Some of the trees were dropping leaves into our food. One lady walked around with some forks and napkins, and a woman said to her, "Mom, if they needed forks they would've gotten them when they were up there." She replied, "Well, just in case they need them." Another guy at the table and I actually needed forks and were glad she brought them over. He asked me, "Why is it we get so annoyed with our moms when they try to help out?"

Brandon was wearing a Social Distortion shirt, and I noted a few other guys at this party with punk bands on their shirts. It was cute watching some of these people, arms covered with tattoos, playing with their children. Brandon said, "I'm into music, and so are lots of my friends." He pointed to a guy named Todd Stedman, who's the drummer of a band called the Fat Tones. The guitarist from the Dragons was here, as well as guys from the bands Unwritten Lam, the Scotch Greens, and the Knuckle Busters Band.

I heard drumming coming from another area of the park, and Liz said, "They are having the annual Anarchy Picnic. They had the first one in 1984, and only 40 people showed up. Some were skinheads and hardcore punkers. In 1986, they had bands playing, and it really got out of control. Today, I think only 25 people showed up over there."

I asked about the juggler Brandon and Liz had hired, and she told me, "I just opened the Yellow Pages. Most jugglers were $150 for half an hour minimum. This guy Larry, he was only $75." He juggled machetes and flaming batons. I kept thinking that if one dropped, the whole place would go up in flames. I don't know if that would cost them more than the party permit would have.

I got home in time to watch the Lakers lose, then headed to my next party. It was at the Bali Hai restaurant on Shelter Island to celebrate Tara's 30th birthday.

I walked in and saw everyone dressed up. Then I noticed a wedding cake right by the door. I made a quick U-turn and was told the restaurant was upstairs.

I've never seen so many people wearing Hawaiian shirts in a restaurant — customers and waiters.

I sat down across from three women. At first, they were looking out the window at the couple who'd gotten married posing for pictures on the boat dock. When the women started talking about jewelry, I thought I'd be in trouble. One said she'd lost a diamond earring and that her boyfriend bought her new ones. She found the lost one ten minutes later. I said, "So you're teaching these other gals how to get jewelry from their men, huh?"

One woman said she was the managing editor of a publication; I think she said it was called Brain Research. She had a lot of great stories. One guy from Brooklyn sent a story to her, and when she called him, he seemed crazy. Another time, they opened an envelope and powder went everywhere. This was during the anthrax scare.

Since we were at a long table, there were lots of people at the other end I couldn't talk to. One guy looked like Richard Gere, and he was the boss of a few of these women. There was a tall gal named Amy, who was a physical therapist, and, ironically, was talking about not working because of an injury.

There was a guy who looked like Sting sitting next to a guy who looked like Johnny Rotten. They were looking at a laptop. One of these guys had just gotten back from Kuwait and was showing the pictures he took over there. He showed the bathrooms and said, "They don't have toilet paper there because the pipes can't support it." I'm not sure what that meant, or if it was something I wanted details on before I ate. He said, "I got back from Kuwait and couldn't believe Howard Stern wasn't on the radio anymore." Somebody responded, "You guys fight for the rights of this country, and you're coming back to a censored America."

He showed us a picture of a food court with a Subway. I said, "Wow, they have Subways everywhere." He said, "In Kuwait City, at the airport, they have a Fuddruckers and a Chili's, too."

Someone asked him the time difference and he responded, "It's 18 hours later, so it's actually tomorrow over there now." I tried to make a joke about betting on the Super Bowl, since he would know which team won, if it's one day ahead over there. The joke fell flat, but he said, "I was actually there during the Super Bowl. But it was on at around two in the morning."

The pictures were interesting, but when our food came, and he was still showing them, I thought — this is like the modem-day version of projectors. I remember a time when you would go to somebody's house and be bored to tears by them showing slides of their vacation. Now people can do this with their laptops, and there's no escape.

The party continued at someone's house near Kettner and Laurel. Most of us were in the back yard, which had a nice view. Everyone was smoking and drinking.

Comedy Central recently did a list of the Top 100 comedians, and we were talking about it. The Richard Gere guy told me about a girlfriend of his whose parents took them to see Gallagher. We all agreed that he wasn't funny, and his smashing fruit got old quick. When the subject of funny movies came up, they couldn't believe I hadn't seen Old School. The woman who owned the house said, "I have it on DVD." We all went inside, and about 25 of us sat there watching the movie. It was like being at a theater, with everyone laughing at certain scenes.

When it finished, this guy was trying to get his friends to go to the Lamplighter. Someone said, "Isn't that a gay bar? Why would we want to go to a gay bar?" His friend said, "It's easier to pick up girls there." A person overhearing this said, "Explain that weird logic. The women there will be lesbians." The guy continued, "Yes, some. Maybe 95 percent of them. But 5 percent of the women there are just their friends. Those are the ones we can pick up on, and they'd have no other choice for men, since we'll be the only straight ones there."

Ten minutes later I left. I told them I was going down the street to catch the Dragons at the Casbah. Nobody wanted to go with me, but that one guy continued trying to convince his friends they should hit a gay bar.