In the swing of it 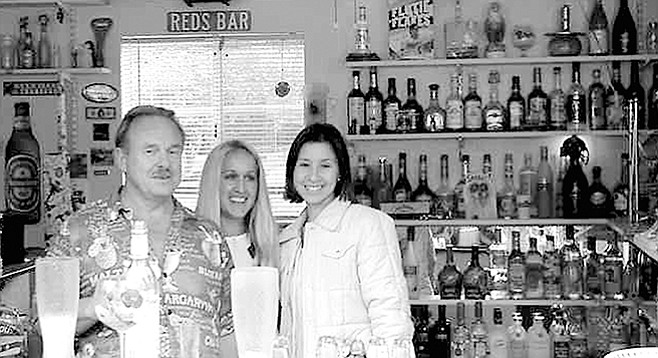 When this "Crasher" column started, the most calls seemed to come from dance studios wanting me to write about them. Most have a party/recital of some kind once a month. I've avoided them. Maybe because on the dance floor I have two left feet. Or as the guys from my high school basketball team used to say — you dance like a white guy. Being white, I didn't take much offense in that. But it's always enjoyable watching good dancers.

So I went to a swing-dance party on an early Saturday night. I knew I'd be able to fit it in before going to another bash.

I was invited by Kell Tyree. When I saw him by the snack table, I asked him about the party. He said, "They have it once a month. They have one during the week, but it's not as elaborate. Tonight they had a workshop. There's a D3, and this is the first time they've had a dance contest. One of the judges is from L.A. He is a bigwig at some L.A. events."

I noticed the swing dancing wasn't as fast-paced as when I see rockabilly bands with young guys in fedoras and wife-beater T-shirts. Tyree said, "This is actually called 'West Coast swing.' It's a more sophisticated form of swing. It got popular in Hollywood in the '40s. I think it's more difficult than any other ballroom dances. We do a country-western two-step and waltzes."

I told him a live band would've been cool, and he said, "They always end up playing too fast. You want to grab the drumstick and hit the drummer over the head."

The variety of music was interesting: country, a few Michael Jackson and other pop songs, and one troupe did a cute routine to a Grease medley. The ladies had pink scarves around their necks, and the men had black leather jackets. Most of them looked to be in their 40s, some older. They all looked as if they were having the time of their lives. One of them later told me it took two months to learn the routine. I was surprised at how ethnically diverse the crowd was. There were two really tall African-American men, and I asked one of them if it was strange dancing with a partner so much shorter than himself. He laughed and said, "No, it's easier. It's easier to get [her] under my arms and swing around."

I saw two different women changing shoes between dances. I asked one why she didn't just wear the one pair that was most comfortable. She said, "There are different shoes I like. Some are more flexible. Others don't stick to the floor. One pair looks really nice, but I can only dance to the slower songs in those." And we wondered why Imelda Marcos had so many shoes.

I wanted to chat with the best dancer I saw. He was a dead ringer for George Hamilton with whiter hair. I saw him dancing with two different women at various times. The women had the biggest smiles. He had only a slight smile but looked as if he was all business. He was graceful and amazingly light on his feet (That's the only dance cliche I know...I had to put it in somewhere.)

His name was Michael Kiehm, and he's owned Innovations, a dance studio, for 21 years. I asked him about bands playing, and he said, "If they do a ten-minute song and you're dancing with a partner you don't like — that's a long time. It's easier with a 03 playing songs."

I realized that although half the crowd were couples, the other half danced with a variety of partners. I wondered if the men got nervous asking a woman to dance, the way we all did back in high school. I also wondered why some people were dressed to the nines, while others wore jeans and T-shirts.

I asked Kiehm if their location so close to SDSU attracts students. He said, "We get some. And some from UCSD also. We have different nights, like a salsa night In the group of people here tonight, some have been coming here for eight to ten years."

The next party I was going to was at a ranch house in Dehesa. It was farther east — actually, right across the street from Sycuan Casino.

Tracy, who was having her 24th birthday party, was very outgoing. She offered me food and a Corona the second I walked in. She was a great hostess. I was surprised when I met her sister, who was so shy and quiet. Complete opposites.

Tracy showed me around the house. It was huge. They had a golf cart out front for going to different areas of the property. We all had a laugh when a five-year-old hopped in it with a slightly older girl and started driving around. I laughed when he almost hit a dog but got worried when he came within an inch of my car. One lady said, "Everyone thinks it's cute and funny, but that's my daughter in there with him."

When Tracy was walking me to the pool area she said, "We have a bar there. The guy working the bar, Pancho, was pissed that I invited you. He might be mean, but just ignore him." He scowled at me and grudgingly asked what I wanted to drink. He was a big guy and looked like a Native American. He handed me a margarita. As I thanked him and walked away, he said, "Hey!" I turned around. He commented on my SDSU jacket. He was an alumnus. Since this jacket had the old mascot, we started talking about the controversy regarding the Aztec mascot. He thought it was crazy that anyone was offended by it. He told me he had a number of Aztec shirts and jackets, but they were lost in the fires seven months ago. He turned out to be a really nice guy.

I later talked to his wife. She photographs animals, mostly horses. When she told me about flying to France for one job, I wondered why they didn't find a good photographer there. I have very little interest in animals, but I enjoyed hearing her stories. One that comes to mind was a horse kicking her 20 feet. I liked the enthusiasm she had for her subjects.

During the course of the party, I heard at least four different glasses break. I heard someone jokingly yell, "If you break another glass you're 86'd out of here!"

A few people came from Utah to attend this party. And a cute lady named Shawna came down from Orange County. She said, "Tracy and I grew up together in Imperial Beach. We both, luckily, got the hell out of there."

There was one guy with a Southern accent. He told me something about two cars of his recently winning a demolition derby.

One lady named Michelle Fisak was telling me about her volunteer work for survivors of cancer. She is involved with the South Bay Relay for Life on June 26. Since I do volunteer work and have lost a number of relatives to cancer, I told her I'd mention the event.

Tracy was very kind to tell me she always reads about the parties each week. And 15 minutes later, I saw her and a few other women looking at a Reader. One of them said, "There it is! Right there, that's him!" Another said, "Wow, I love it." My ego was enjoying this until I walked by and glanced over their shoulder to see what story of mine they were so captivated by. They were looking at ads. It turns out they were looking at an ad for Club Rio. It had a picture of a handsome guy with one hand in his hair and the other hand lifting his shirt. The guy in that picture was standing near me, and that's why they were pointing in my direction with the Reader opened. With my ego deflated, I asked the guy how he got in that picture. He said, I'm a male dancer there. Usually when I go out there. I'm a fireman or Tarzan. Actually, I haven't done Tarzan in a while." The gal he was with added, "He's so sexy when he dances." I told her, "Men aren't just pieces of meat, dancing around for you ladies to gawk at. We have minds. Why don't you get to know us, instead of just looking at our bodies?" Another girl looked at me as if I was crazy. I don't think she got the sarcasm. Later, one of the women said, "Isn't it weird that male dancers come out dressed like doctors or firemen? It's almost like the women want to see somebody that has a good job. You men go to those clubs and just want the women

to take the clothes off as fast as they can."

There were a few people talking about surfing. One of the guys had surfed on the UCSD surf team. I told him I didn't even know the university had a team. He said, "Oh yeah. So does SDSU. We had some competitions against them."

One Latina gal had a shirt that said "I Love Nerds." I told her I was at a party three months ago and saw a girl with a shirt like that. I know there's a band called N.E.R.D. I asked what the deal was with the shirt. She explained, "The nerds are the rich guys like Bill Gates. In high school they were nerds. Now they have good jobs."

One kid told Pancho to make him a Bacardi and Dr. Pepper. He sat down next to a guy who wouldn't leave the hookah pipe he was smoking. He told me, "I brought a lot of different flavors of tobacco, even black licorice." When Tracy took a puff, I asked if her parents cared that she was drinking and smoking. She said, "Oh no. My parents are totally cool."

It was getting late and getting cold. Somebody moved the heating lamps over. As one guy was bringing one over, he dropped a large propane tank. Somebody said, "You're going to blow this place up and we're all gonna die!"

There was a big square near the pool and I asked somebody if it was a Jacuzzi. He laughed and said, "I think it's a sewage system. It's definitely not a Jacuzzi."

As I was getting ready to leave, a tall, good-looking guy in a big truck pulled up. It was a guy Tracy had been talking about. I heard her tell somebody she was happy he was able to make it to the party. But as I talked to Tracy's mom, I saw him spend 15 minutes at the bar drinking and watching the Lakers game on the TV. Maybe not a great future husband candidate. Especially when there are firemen and doctors at this party. Or guys dressed up like them anyway.

When I go to Tracy's 25th birthday party next year. I'll find out what happened with this guy. ■