In love with a Marine’s 17-year-old girl 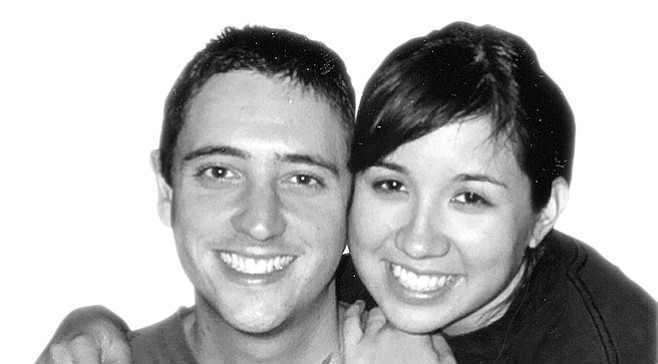 What do you do if you meet your true love at 17, your love is an “older man” of 22, your mother was raised traditional Japanese, and your father is a retired Marine? You wait. Kristina McDonald could write a book about waiting.

“Matthew and I met at his sister’s graduation party,” Miss McDonald, 20, says on a recent July evening. Sitting outside a Mira Mesa Starbucks, she and her fiancé Matthew Lyons, 25, laugh about their first encounter.

“She was best friends with my sister Angela,” Mr. Lyons picks up the thread. “I saw Kristina at Angela’s graduation party, and I knew right away that I liked her.”

“He came up to me and told me that he had a thing for Japanese girls. I grew up in Okinawa and moved here when I was 11. I told him, ‘I’m only half Japanese, so it wouldn’t work out.’”

Miss McDonald didn’t know how wrong she was. Within weeks, she and Mr. Lyons were seeing more of each other. “Every time I went over to Angela’s house to hang out, Matthew was there.”

Because of their age difference, the couple kept their love under wraps for a whole year. “I was only 17,” Miss McDonald explains. A senior at Mt. Carmel High School, she wasn’t old enough, in her family’s eyes, to be dating a 22-year-old SDSU student. They didn’t kiss for a whole year. “We would hold hands under the dinner table,” Miss McDonald confesses. “Or if we were watching a movie at Angela’s house, Matthew and I would hold hands under the blanket.”

“We played a lot of footsie,” Mr. Lyons confirms. “And e-mailed and talked on the phone.”

Miss McDonald and Mr. Lyons came out as a couple after Miss McDonald’s high school graduation. They dated for two years. This past Valentine’s Day, Mr. Lyons had the day planned. “Then I got the stomach flu,” he says. “We got in a big fight. We were downtown. We were going to go out for sushi. When I got sick, Kristina said she didn’t want to eat alone. She wanted to go home.” Miss McDonald didn’t know that her parents and Mr. Lyons’s parents were waiting to help them celebrate their engagement.

“I finally convinced her to go to Todai,” Mr. Lyons continues. “Then we went over to Coronado to walk on the beach.”

“After a while,” Miss McDonald says, “Matthew said he had to go back to the car to get my gift. He came back with his guitar. He played me a love song he had written for me three weeks after we met. I cried. We hugged. Then he said, ‘That’s not it. There’s more.’ I thought, ‘He’s not going to ask me to marry him. We have no money.’ He pulled a black box out of his pocket and got down on one knee.”

After Mr. Lyons popped the question, Miss McDonald fell down laughing. “I laugh when I’m nervous,” she explains. “I asked him how he could afford a ring.”

“I sold my hot rod,” Mr. Lyons says. For the previous year, Mr. Lyons had been trying to sell his 1978 Chevy Firebird with a 350 V-8 engine. “Some guy from Wisconsin bought it over the Internet. He flew out here on a Friday and drove it home. I took the money the same day and bought the ring.”

Miss McDonald holds up her left hand and the one-half-carat diamond solitaire set in white gold flashes in the setting sun.

“When we got home, our parents were waiting with cake and drinks,” Miss McDonald says. “I was so surprised they had kept the secret. Usually my parents tell me everything.”

Mr. Lyons says he had a hard time asking for his beloved’s hand. “Her dad wouldn’t even look at me,” he recalls. “He was watching TV. I told him, ‘Kristi and I have been serious for a while. I want to ask your permission to marry her.’ He said, ‘Do you have a job?’ I said, ‘No.’ He said, ‘Do you know when you’re going to get a job?’ I said, ‘No.’ He said I could marry his older daughter, but not Kristi.”

Mr. Lyons will receive his credential next December and plans to start teaching in January 2005. “I asked Kristi’s dad if she and I could get married in December after I graduate. He said, ‘No.’ That’s how we came up with next summer. I will have been working for six months.” Miss McDonald will still have to complete her studies at Cal State University, San Marcos.

The couple plans a July 5, 2005, wedding outside at the Officers’ Club at the Marine Corps Recruiting Depot on San Diego Bay. The reception will follow. “We’re inviting about 150 people,” Mr. Lyons says. Their pastor from Scripps Mesa Bible Church will officiate. Until then, Mr. Lyons and Miss McDonald will have to wait.