Some three decades in the making, the bicycle route encircling the south end of San Diego Bay is nearing completion. The past decade has seen the construction of new bicycle paths along the bay shore in Coronado and Imperial Beach, and work has just been completed on a miniature two-lane bicycle roadway linking National City and Chula Vista. This latter segment of bikeway includes a graceful bridge over the Sweetwater River tidal channel.

Using the new link you can piece together a six-plus-mile excursion that visits the bayside waterfront of both cities. A pleasant place to start pedaling is Pepper Park, a public boat-launch facility at the south terminus of Tidelands Avenue in National City. Nearby, at the corner of 32nd Street and Marina Way, you pick up the designated bicycle path (OK for pedestrians, too). Ongoing construction in this area will eventually lead to a small-boat harbor and various commercial venues -- National City's attempt to emulate Chula Vista's developed harbor and bayside park facilities a little farther south.

The bicycle path ahead skirts portions of the Sweetwater Marsh National Wildlife Refuge, where moist and not unpleasantly rank odors hint at the biological richness found in shallow tidal channels and uplands covered in salt-tolerant vegetation.

The path soon leads to a point under the spaghetti-like ramps of the Interstate 5/State Highway 54 interchange, where signs indicate a junction between one path leading east toward Plaza Bonita, and another path going south toward the Chula Vista Marina. Take the latter, and swoop over the brand-new bridge. Continue curling south, at times separated from I-5's auxiliary ramps by only a low concrete railing, until you reach E Street. A parking lot for Chula Vista Nature Center visitors lies on the right. Go straight on Bay Boulevard, sharing space with the sparse car traffic. Traffic is heavy here only when workers are arriving or departing their workplaces.

At Marina Parkway (J Street on the left), turn right to initiate a looping return, using Marina Parkway and Lagoon Drive to get back to Bay Boulevard. The area seems relatively quiet now, but future hotel development along the Chula Vista bay front could change that.

If you care to extend your reconnaissance of Chula Vista's shoreline a bit further, make a side trip on Bay Boulevard for a mile south of J Street. You'll pass the natural-gas-fired South Bay electric generating station, and pull up alongside the South Bay Salt Works, where mammoth mountains of raw, granulated salt can be seen. The southernmost extremity of San Diego Bay is one of the few sites in the country where seawater is concentrated and evaporated with the help of solar energy to produce a precipitate of sodium chloride (common table salt). 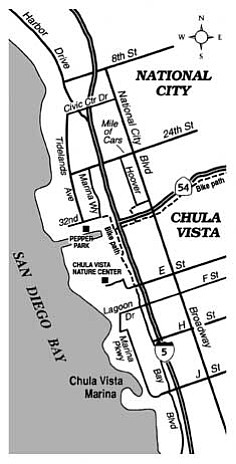