Nobody Talks, Everybody Walks 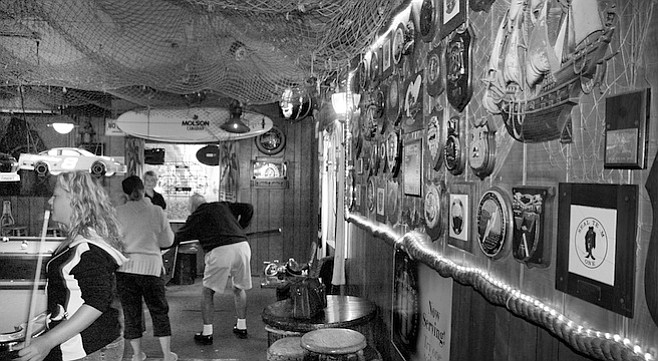 San Diego — All the recent commotion about U.S. atrocities at Abu Ghraib Prison and elsewhere got me thinking about Ka-Bar knives, which in turn got me thinking about former senator and now member of the 9/11 Commission Bob Kerrey. In his autobiography, When I Was a Young Man, Kerrey offers a cautious mea culpa for killing those Vietnamese villagers one dark night in Than Phong Province. Kerrey admitted men in his SEAL squad used their Ka-Bars on five Vietnamese in a hut near the doomed VC ville where "Kerrey's Raiders" would kill at least 18 women, children, and old men. The Raiders accomplished their chore with automatic weapons, rockets, and grenades. 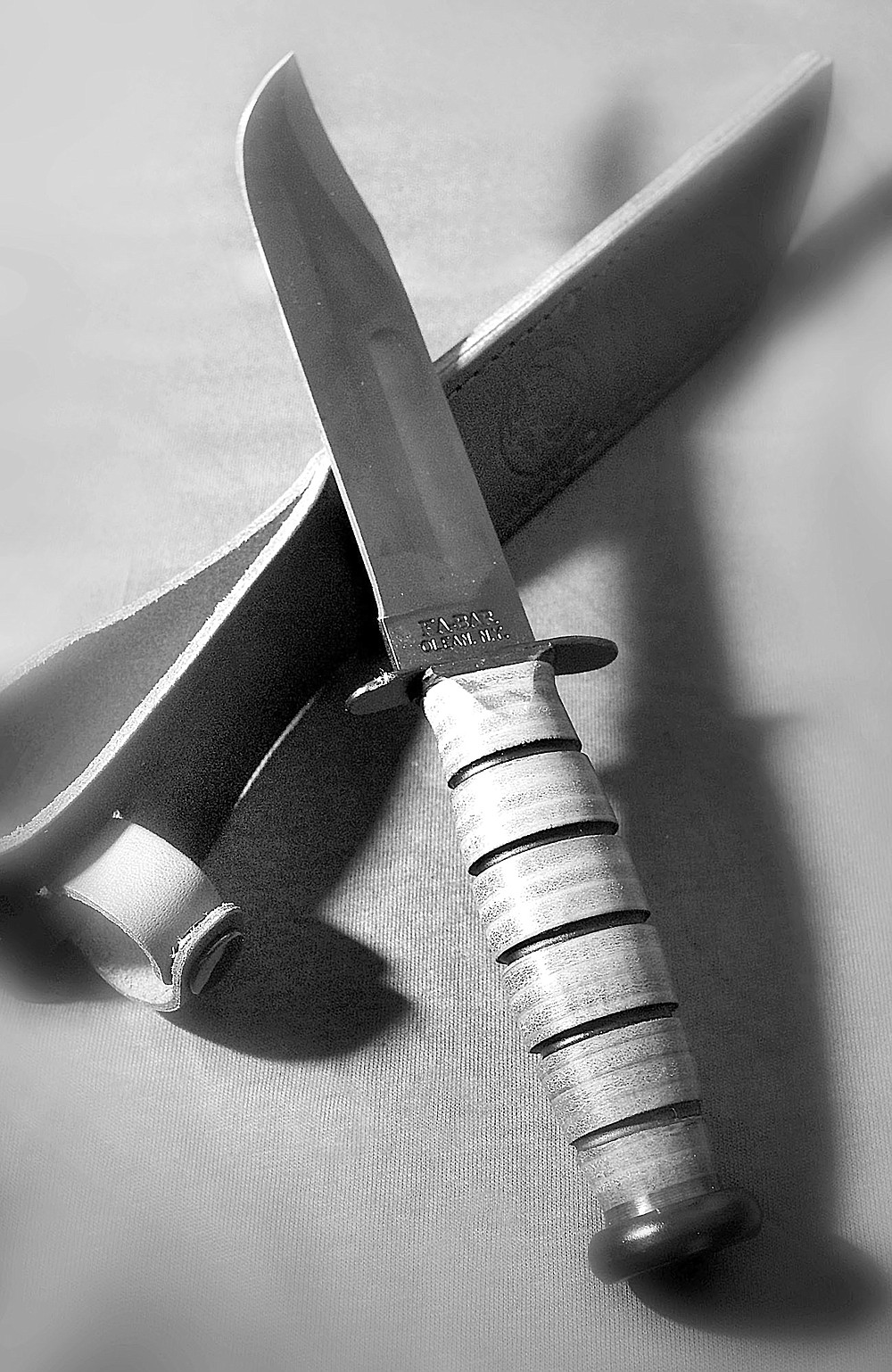 Ka-Bar. "Nobody said nothing. We just took out our knives and started cutting. We passed 'em down the line and ever'body got good 'n wet."

But Kerrey said he had not taken part during the wet work with the Ka-Bars in that hut, or "enemy outpost," as he and five other Raiders called it in their written statement describing the deed. The statement also referred to the nasty business with the knives as "lethal means." Kerrey and his men have steadfastly refused to go beyond the boundaries of their statement, recalling the old criminal defense lawyer's adage, "Nobody talks, and everybody walks."

But a sixth Raider, Gerhard Klann, was willing to talk. Klann recalls events differently and more graphically than the others in their careful statement. Klann told Greg Vistica, the New York Times and former U-T reporter who broke the story, that on Kerrey's orders Klann thrust his knife time and again through an old man who continued to struggle and refused to go gentle into that good night. Kerrey, said Klann, pinned the old man down with a knee to the chest while Klann employed lethal means to nearly sever the enemy's head from his body.

But who's to say what really happened? All I know is that Kerrey's men weren't the only SEALs who got wet using Ka-Bars in 'Nam. Here's a no-shitter I heard about the practice from one of my SEAL mates several years ago. We met by chance just before midnight at the Plank, an old SEAL Team bar hard by the ocean in IB about a klick above the border. During the war years, SEALs cycled through the Plank going to and coming from Vietnam. Now the Plank entertained a different crowd: bikers, blackshoe sailors, off-duty Border Patrol agents, desperate real estate ladies, and horny girls who spent their days checking groceries at Ralphs. Only a few Navy plaques on a sidewall recalled the time when any man who entered the bar without a Rolex Submariner strapped to his wrist courted doom.

I didn't see him when he first approached as I lingered by the SEAL Team One plaque that displayed Sammy the Seal, a cartoon character who peered from beneath a beret, his whiskered face half-concealed behind a flipper draped with a spy's cloak. The flipper clutched a gleaming Ka-Bar knife.

My old teammate startled me when he said, "Y'know, Willy Lump-Lump thought up that plaque." He fixed me with bottomless black eyes and added, "Willy's the one put it together, designed it."

I hadn't seen my mate for many years -- not since he'd returned from the last of too many tours in-country. He hadn't changed much: powerful torso on short, slender legs; sloping shoulders that made him appear to be rushing toward you bent on mayhem even though he was standing still. He wore a soiled rugby shirt tucked into Underwater Demolition Team swim trunks; a Rolex Submariner rode his wrist.

We embraced, pounded each other on the back. He smelled of tobacco and lighted matches. I remembered he liked to roll his own. I stepped away and saw that his close-cut hair, once black as pitch, now had gray bristles showing through.

We made our way to a table near the open, curtained doorway where he continued with Willy Lump-Lump. "Yeah, Willy was a great guy but a little crazy. Remember how he used to tell us his greatest dream was to win the Big Blue posthumously for his widow? But after he went high order with that VC mine, all his old lady got was a closed casket and a Bronze Star with combat vee."

A blast of Arctic wind off the ocean drove through the doorway, whipped the red Naugahyde curtain back into the room. The curtain, worn thin by those who had entered and departed the Plank over the years, looked like a translucent, shimmering membrane as it settled after the wind died. A fat-legged waitress in a miniskirt brushed by the membrane and took our orders for two Buds. Across the noise of the dwindling crowd we heard surf thundering through the pilings of the IB pier.

"No, no. I mean, d'ya know what happened on this very day all these many years ago in Veet-nam?"

Before I said I couldn't even guess, he added, "Billy Machen died on this date in the Rung Sat swamp. Roger Moscone carried Billy out after he got churched walking point, remember?"

"Sure, I remember Billy and what Roger did -- carried Billy's body on his back through several klicks of thigh-deep mud or worse. But I'd forgotten the date." (I don't think I ever knew the date: I just thought of it as one of those very hot days in the swamp, if I thought of it at all.)

"D'ya know they renamed the desert camp out at Niland for Billy?"

"I didn't know that. I thought the camp was named for Bob Kerrey."

My mate snorted in disgust. "It was until Bob teamed up with Hanoi Jane and joined those motherfucking war protestors."

"Well, Bob did win the Big Blue and lost a foot in the battle."

"Yeah, but he never shoulda got the medal. Got it because the commanding officer of Team One, Uncle Dave Schaible, decided we needed an officer hero with the Medal of Honor. Uncle Dave upgraded the Silver Star for Kerrey to the Big Blue. Done this while an enlisted guy, Muncher Gallagher, got his Medal of Honor downgraded to a Navy Cross."

"Yeah, but Muncher deserved better. Guy fought off a company of VC all night while leading a bunch of broke-dick VN mercs outta harm's way without any U.S. air or arty support."

"Hey! But d'ya remember the good times we had out there in the desert at Niland? Didn't have no buildings then. We slept in back of that gas station on Highway 187, cleaned our weapons in the grease pit, got all fucked up at the Silver Dollar, and sometimes got lucky with that 120-degree pussy used to hang out there. Remember?"

Before I could reply, he'd drained his beer and shouted across the room for the waitress to bring another round, even though my glass was only half empty. "Better drink up, mate," he said.

The waitress returned with foaming drafts. After she left, he leaned over the table, his face inches from mine, his tobacco breath enveloping me.

"But let me tell you what we did for Billy Machen on the first anniversary of his death. Six of us outta the Delta was pullin' liberty at Frogsville up in Danang. We was hangin' out with the UDT guys playing beach volleyball during the day 'n getting airstarts from Big Red in M1A1 Alley at night. Suck me silly with a handy billy!" He laughed a short, barking laugh devoid of mirth.

"This particular night," he continued, "we was drinking at an Alley bar when someone -- don't remember who -- reminded us that it was the anniversary of Billy's death. No one there had been with Billy, but we all felt like we had. He was one of us. We talked about Billy for a while and how he died, and then we decided we should do something -- get some payback.

"We left the bar, returned to Frogsville and jocked up -- put our web gear on with full loads. I carried the grenade launcher. Rest of the patrol had the usual assortment of M16s, CARs, and of course the Stoner. We all had sharpened Ka-Bars with a light coating of WD-40.

"We borrowed a UDT weapons carrier and headed north out of the city up toward the Do-Long bridge."

"Tell anyone where you were headed? Lay on any support?"

"We got to the bridge a little after midnight, left the weapons carrier with a squad of Marines guarding the bridge, and started patrolling along the river into Happy Valley. Told the jarheads we'd give them a green flare on the way back in."

"Didn't you have to go pretty deep into the Valley to make contact? You probably wouldn't run across anything close in except woodcutters, fishermen, maybe farmers."

"Ever'body in that fucking valley's VC -- especially after the sun goes down." He paused to pull at his beer. "Hadn't gone more'n two or three klicks before we heard 'em thrashin' toward us up from the riverbank chirpin' away like slopes do.

"We eased off the trail into the bushes and waited still as tombstones. There was three of them with fishnets: two men and a co. We let all three get in amongst us before we grabbed them.

"Nobody said nothing. We just took out our knives and started cutting. We passed 'em down the line and ever'body got good 'n wet. I damned near cut my own self when I sliced clean through one of them scrawny Veetmanese necks.

"After we'd finished, I got an idea. I turned the co over and slit her black pajama top open. She had a pretty good set on her. I went to work like Jack the fuckin' Ripper.

"When we got back to Frogsville, I cleaned, cored, and cured the tit. Punched holes around the open end and worked a skinny length of rawhide through the holes for a drawstring. Made a dandy pouch for my Prince Albert."

He made a movement with his hand and, for a startled instant, I feared he would produce the leathered thing and a pack of Zig-Zags to roll his own. But all he did was grab my hand and say, "Gotta go. Someone's waiting. Great seeing you again, mate." Then he vanished through the translucent curtain into the night. One of us.