No place for a white guy 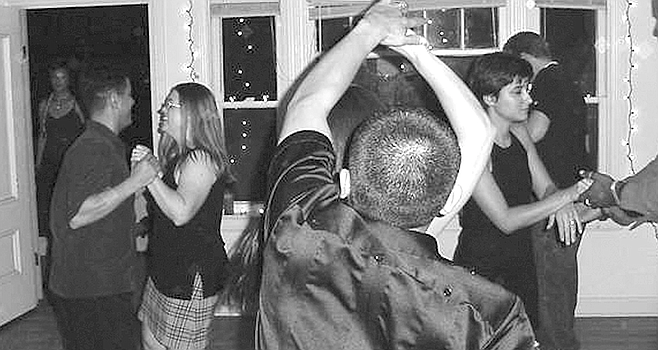 My first party was in South Park, a salsa party for a gal's birthday. The guy who invited me was named Phillip; he spoke with a thick German accent and looked like a combination of a younger, better-looking Andy Warhol and the Mike Myers character Dieter from Saturday Night Live who said, "Would you like to pet my monkey?"

Phillip was a great host, telling me the beer and alcohol were in the refrigerator and food in the kitchen. But when I went into the kitchen, I didn't see any food. I did see two people smoking a joint. And I saw a giant chocolate cake. I opted for the cake. I took a beer as well and watched four couples salsa dancing.

A beautiful Asian woman named Mai lived at this house with two roommates. She told me it was her birthday the following week, and I heard her say, "I'm going to spend it with my mom. She's a real party animal." She kept trying to get me on the dance floor, and I kept telling her, "A dance floor is no place for a white guy." I asked one of the other women, who looked to be in her early 20s, if they moved all the furniture out of the living room for the space to dance. She said, "No. We don't have much furniture. It's always like this. We only have those two couches."

Speaking of furniture, I met an African-American furniture maker named Gary. He was 6'6" and was an amazing dancer. And every time he went into the kitchen for a drink, he had to duck to avoid the light hanging down. Since I played basketball, I brought the subject up with him. He told me he didn't play. (Damn it there I go stereotyping people again.) I told him about meeting the actor Wolfgang Bodison who starred in A Few Good Men. Bodison was a tail African-American, and he said when Nicholson would see him on the set. Jack always wanted to talk about the Lakers. Bodison told me, "It was so embarrassing because I don't know anything about basketball, and he knows everything — all the stats of all the players. People assume because I'm tall and black, I should know about hoops." But Gary didn't hold it against me. We talked about a number of subjects, and he promised to invite me to some cool parties he knew about. 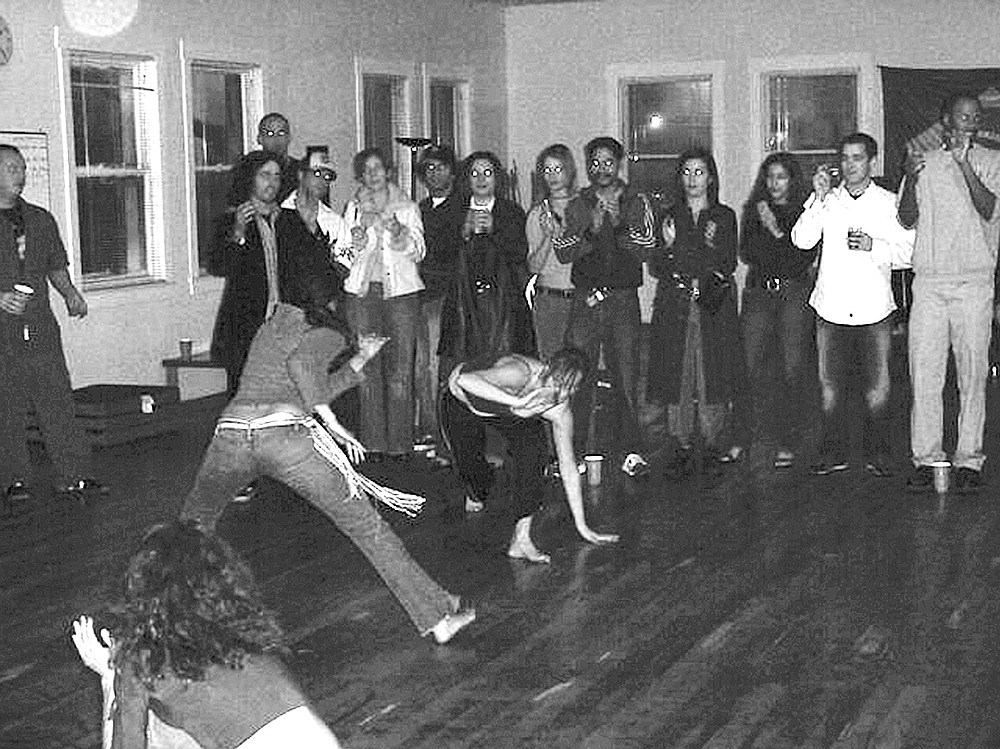 I enjoyed watching everyone salsa, but when you've got ten couples on the floor, it gets quite crowded. A few times people bumped into each other. And I don't particularly care for that music. I asked Phillip if the neighbors minded, and he said, "I told them we were having a party and invited them. It's not too loud, though."

While I was waiting to use the bathroom, a cute blonde who looked like Sarah Jessica Parker started talking to me. When I told her who I thought she looked like, she replied, "Everyone says that. I hate that, because I don't think she's that pretty." She's a journalism major at SDSU and said, "Can I ask you some questions about journalism and writing?" She then asked me a question, and as I started to answer, she started talking to somebody else. When she was done talking to that person, she asked me another question. Again I started to answer, and she walked away to say hello to a person entering the party. She then came back and told me she once sat next to Bill Murray on an airplane.

An Asian guy overheard and told me he writes for the Journal of Asian Culture and Commerce. There was a stack of those papers ﻿against the wall. I wanted to ask if he brings those to parties instead of a nice bottle of booze. He and I had a great conversation about writing and dealing with editors (it was good stuff, if you're reading this, boss). An Asian lady told me later on the porch, where ten of us were smoking, that she writes for a Filipino magazine and that she wrote a story on gambling at the Indian casinos she was hoping the Reader might publish.

As I walked back into the party, I told Mai she was a good dancer. She grabbed me and made me dance. Of course, she did all the dancing, and I basically stood there. Her scarf was nearly touching the floor, and she looked sexy. I said, "How can you dance so well with one hand holding your beer?" She smiled and took a drink while continuing to dance.

One of the few white couples I saw there was in the middle of a dance lesson. The girl was telling her boyfriend, "Just count. 1-2-3. See, it's easy." As he did this, looking down at his feet, she said, "You've got it! That's all there is to it."

Some of the men dancing looked uncomfortable, but all the women were enthusiastic as they shook their hips and smiled. One short, good-looking Latino guy was amazing. He danced with a few different women, and I overheard someone say, "When you dance like that, you could probably get any woman at this party."

There was beer and a Brazilian drink called caipirinha, which has vodka, lime, and lots of sugar. It was pretty strong.

Since Sarda looked to be Caucasian, I asked about her name. She said, "In Capoeira, they give you a name. This isn't my real name, but sarda in Portuguese means freckle." Her face is covered with freckles. She introduced me to her boyfriend, a 6'3" redhead named Cenoura.

She told me, "That means carrot. When they see you, they give you a nickname by looking at you." That reminds me of Animal House, when the fraternity names people by looking at them (although it sounds cooler being a Sarda or Cenoura than a Flounder or Otter).

I was surprised to see a lot of Caucasians at this party. Sure, I did see a few Middle Easterners and people of other races. Everyone looked to be in their early 20s except for a white guy with a beard. He told me he's one of the older ones, in his 40s. He said, "Hey, we were performing capoeira in Balboa Park at a Reader party. One of your bosses started doing it, and did it well. He could actually do a handstand. I think he does a lot of yoga. It was funny when all the change fell out of his pocket, though. He certainly wasn't dressed for it." He went on to tell me that learning capoeira at his age is difficult on his body. He confessed, "I'll never be able to do the moves that our master can do. He's not here tonight but is in New York."

The one Brazilian woman I talked to was telling me a lot about capoeira. She is involved in demonstrations at schools and loves working with children. She explained all about the origins of this type of dance, the instruments used, and how you learn to play those as well.

I was watching some videos on a TV they had, and it seemed odd. I grew up as a kid watching Bruce Lee movies. And as a teenager, I was a big boxing fan. Well, this is more of a dance between two people. A circle is formed, and musical instruments are played. The two in the center of the circle keep eye contact and throw roundhouse kicks and punches at each other, but they never connect. They let the other duck, and in between that, they dance. It looks like break dancing. And it involves a lot of handstands. Sometimes one ^ will step out of the circle, and another will jump in. It looks a little like the tag-team thing in wrestling. When a new person enters, they often do a little prayer in front of the people playing the instruments.

I ask Sarda if people ever get hit accidentally. She said, "Yes. Some people are more aggressive. A lot of us have only been doing this a few years.”

The reggae band the Prolifics had been sounding great. I especially liked their ballads. But when they took a break, the capoeira started. A circle was formed, and the crowd clapped in rhythm, three quick claps every few seconds. A few people had instruments: a tambourine and a few berim-bau, which is a stringed instrument that is always played. Another pounded a bongo drum.

It was fun to watch them, especially Cenoura, who is one of the few here who can do the handstands with ease. Another guy did a series of flips that amazed me. When the women performed, it reminded me of the way people danced at Wood-stock, with more swirling than flying kicks and handstands.

There was a tiny balcony that about ten people crowded onto. Somebody said, "You can climb up that fire escape ladder. Once you're on the roof, you'll get an amazing view of the city. But when you walk up the ladder, try not to look down."

I'll wait for my next dinner at Mr. A's for a view of the city.