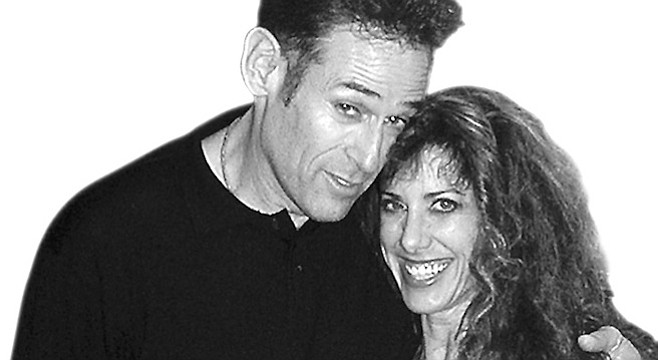 "I met him online,” Mimi Grifkin says of her fiancé, Steve Rasky. “He lied about his age.”

Sitting at a corner table in a College Area coffee house, Miss Grifkin, 42, shoots Mr. Rasky a teasing look. “He said he was 42. On our second date, I asked him for his ID.”

“Funny thing was,” Mr. Rasky continues, “I had left my driver’s license at Home Depot.”

Prior to their meeting, Miss Grifkin and Mr. Rasky had both spent time looking for love on the Internet. “I had been dating people I met online — Match.com, places like that — for about eight months,” Miss Grifkin reveals. With her long, curling hair and expressive hands, Miss Grifkin looks like the belly dancer she is. “I dance at Troy’s Greek Restaurant once or twice a month,” she says. “I’ve been dancing there for the last ten years.” When she’s not dancing, Miss Grifkin is a math professor at Southwestern College.

“I am Jewish,” she continues. “It’s hard to find a nice Jewish guy. I finally looked on JDate last November. I saw Steve’s profile. I thought, ‘He’s cute.’ I e-mailed him.”

Mr. Rasky responded. The couple spoke on the phone. “I don’t really like to write back and forth,” Mr. Rasky explains. “I think my personality comes out better on the phone.”

On December 19 of last year, they met at El Torito in La Jolla for drinks. “It wasn’t love at first sight,” Mr. Rasky remembers. “She was a little forward.”

“He told me he was taking a Spanish class,” Miss Grifkin explains. “So when we said good-bye, I told him in Spanish to call me.”

“I didn’t understand her. When I asked my professor later what Mimi had said, he told me. But he said she hadn’t said it correctly.”

“We had a nice conversation that first time,” Miss Grifkin says. “But the good-bye kiss is what sold me. I said, ‘This man can kiss.’”

For their second date, Miss Grifkin and Mr. Rasky went to a Jewish Singles dance on Christmas Eve at E Street Alley. “It’s one of those places where you run into all the people you used to date,” Mr. Rasky says.

In fact, Mr. Rasky did run into an old girlfriend. He left Miss Grifkin’s side to say hello. “I was actually impressed that he was able to keep it clean with an ex,” Miss Grifkin reveals. “Not everyone can do that.”

On their third date, dinner at Third Corner in Ocean Beach, Mr. Rasky asked Miss Grifkin if she would spend New Year’s Eve with him. She agreed. “He rented a room with a view of the bay at the Sheraton Harbor Island,” Miss Grifkin says. “When we checked in, he already had the room set up with a dozen red roses and a chilled bottle of champagne. When we went out that night, he wore a tux, and I wore a red-sequined minidress with matching shoes. We looked great.”

“I definitely knew there was a future with Mimi,” Mr. Rasky says.

“Within four weeks, I asked her if she would be my girlfriend.”

“I had never had anybody ask me that before,” Miss Grifkin says. “It shows a lot more commitment than just a kiss.”

“I read [the book] The Rules,” Miss Grifkin says. “I would never say I love you first or ask him to marry me.”

When Mr. Rasky proposed, he didn’t plan it. “I don’t really think ahead of time about what I do,” he says. “It has to come from the heart. One night I was just holding Mimi, and I asked.”

She said yes. They went looking for rings. “That was another way he showed me his commitment,” Miss Grifkin explains. “He wanted the most unique, most beautiful ring he could find.” Miss Grifkin holds up a truly gorgeous ring — a large center solitaire with two side emeralds.

The couple plans an Orthodox Jewish wedding next summer. “I’m not moving in with him until he creates a dance studio for me,” Miss Grifkin says. “And I have a lovebird. So he’s getting rid of his cat.”

“I love Mimi deeply,” Mr. Rasky confirms. “Every month, we celebrate the anniversary of the day we met. The romance is still alive. I don’t take her for granted. We have great passion and stellar conversation.