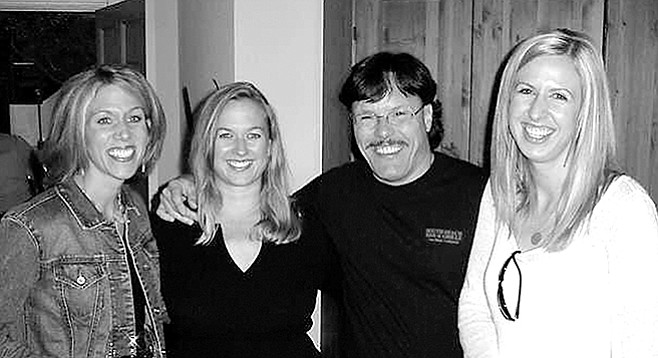 If you re going to San Francisco / Be sure to wear some flowers in your hair."

Since it's 2004 and not 1967, have the flowers tattooed on your body somewhere instead. Everyone at this party was covered in tats.

Becca was having a going-away party, and I asked her why she was leaving sunny San Diego for the cold Bay Area. She said, "Oh, I'm originally from there. And I can make a lot more money there."

"I'm a prostitute. And Bear Paw over there, he's my pimp." She laughed and continued, "No, I'm a waitress." Another girt came up and said, "Bear Paw is a pimp, though. A bunch of the girls at this party are his ho's."

I talked to Bear Paw, who was drinking booze out of a giant mixing bowl. I asked why he wasn't using a glass, and he explained, "I pour a bottle of champagne in here. Then I pour in orange juice and have a mimosa."

"How many of those do you drink at a party?"

"Usually two. I've cut down on my drinking a lot, though. My parents bought me some Breathalyzer kit recently. And when I saw how much I was drinking without it affecting me, I decided to cut down." About 15 minutes later, when some people were making a beer run, I heard him tell the couple to buy him another bottle of champagne.

He invited me to this party in Pacific Beach, and when I asked about his name, he said, "It's been Bear Paw since high school. When I graduated, I weighed 278 pounds, and I remember thinking that was cool because Hulk Hogan weighed a few pounds less than that when he graduated from high school." I'm not sure how much heavier he is now, but he's a giant. And it turns out we went to the same high school. We spent an hour talking about our favorite teachers.

A guy pulled up on his motorcycle as we were talking. He drove it right onto the front lawn, left it there, and went in for a beer. A guy in a Ramones shirt who was drunk (at 4:00 p.m.) stumbled onto it and fell down. It would be the first of four times I'd see him hit the deck.

One girl came down from Riverside for this party, and she kept bugging me about everything I did. She wanted to know why I was taking pictures, what I was going to write — and she seemed concerned that her boyfriend would see the photos and be mad. One time she said to me, "You missed that photo opportunity. I just licked this other girl on the face." I asked if she could do it again, and she responded, "You wish."

There were fajitas on the table with other snacks. There were two trays of brownies, and I grabbed one. Later, the brownies ended up on the front porch and a cat was sniffing them. One of the girls (they all appeared to be in their early 20s) was upset, thinking her cat ate one. Somebody else said, "Yeah, I heard that chocolate isn't good for animals." The concerned girl responded, "It's not the chocolate I'm worried about. These brownies have pot in them. I don't know how that will affect the cat. I sure hope he didn't eat one."

Along with this crowd having bodies covered in ink, one guy had large loops inside his earlobes. I asked if it hurt having them put in. He said, "No, because they gradually make the loop larger. When I had them put in two years ago, they were small. Each time I'd go back, we'd put in a larger one, so they would slowly stretch the lobe out."

One guy just recently got a tattoo. He lifted up his shirt, and I could see where the hair was shaved on his stomach for the tattoo. It said "Diarrhea." I asked if that was a band he liked, and he said, "No, I just wanted to have the word tattooed." I heard another guy say to his friend, "Damn, why didn't I think of that? That's so funny." Another responded, "Now you need to have toilet paper tattooed around it."

I followed Bear Paw into the kitchen to watch him mix his concoction. I was laughing as he poured an entire bottle into his bowl, which he held like a king holding a giant goblet. Another guy was in the kitchen munching on a brownie. He said, "This is my second one. These are good." Somebody said, "You know there's pot in them, right?" He started freaking out, saying, "Damn it! I could get in trouble at work. They do random drug tests."

I found out he was a carpenter. I asked how often they get tested, and he said, "Not that often. But if anyone gets hurt on the job, they automatically test every employee."

I was surprised to see one person at this party who was a UCSD student. These guys looked like the Ramones, not UC students. He was telling me something about people being

forced to live off campus once they become juniors or seniors, because of a housing shortage.

Since this party was so close to the bar Sco-lari's Office, they were talking about going up there later. One person

informed them that the place's cabaret license recently expired and they weren't having live music. As I left for my next party, they were discussing where else they could go. I glanced around, and one guy was passed out on the couch. And the guy who kept falling down was now walking with a limp. The cat looked fine. And Bear Paw was smiling, with a girl resting her head on his shoulders. I was thinking as I drove away how it's the big guys who look as if they could crush anyone like a beer can who are always the nicest.

And when I got to the next party, which was off Crown Point in Pacific Beach, my theory was confirmed about big guys.

There was a guy who was 6'4" sitting on the porch. He looked just like Jesse Ventura, and when I told him that later, he said he always hears that. He said in a deep voice, "Great, you brought flowers.

That's going to make us all look bad." But since Krista was a friend of a friend who I had met a number of times at different parties, I had to show up with something.

Jim, the Ventura lookalike, was one of the most interesting people I've ever met. He knew so much on such a wide variety of topics. At one point he was explaining why cigars from Cuba were better than other places (because of the soil). Another guy brought up steaks, and Jim was talking about different cuts of meat like a butcher. And he knew a lot about literature, old movies, and every other topic under the sun. He went to Helix High School and graduated a year before Bill Walton, the Basketball Hall of Famer whose son now plays for the Lakers.

Jim kept bringing us shots of vodka that were in weird-looking shot glasses. They were really long, with a big base at the bottom. Someone said, "You go to parties all the time, and you've

never seen shot glasses like this?" I could only handle three of these shots. They burned in my chest the second I downed them. Jim told his wife to throw it back, and she said, "I like to sip my shots." He laughed.

When we were on the back patio, I asked if the few people standing there minded if I smoked a cigar. He responded, "Do you mind if I fart?" I said no and lit up.

One guy came into the back yard carrying a keg and Jim said, "Good, you brought some beer." He replied, "Well, enough for me, anyway."

One girl was passing out Jell-O shots. A girl with a thick accent grabbed a fork to eat one. I asked her why, and if. when she gets a regular shot, she uses a straw to drink it. She said, "I'm not a slob. Where I'm from we eat with forks." She wanted me to guess where she was from, and I said Germany. She was dark skinned and very pretty. I couldn't understand her completely, but I think she said she was born in India and raised in France.

Krista's boyfriend grabbed some spinach salad and was picking at it. He said, "I don't usually eat vegetables or fruits of any kind." He picked up a leaf and ate it. He said, "Hey, that's not that bad. But am I supposed to eat the middle part of the stem?"

Jim's wife brought a bunch of deviled eggs, and I asked Jim how many of those Paul Newman would be able to eat. Without missing a beat he said, "I think 84. Wasn't it 42 eggs he ate [in the movie Cool Hand Luke]?"

When I was getting ready to leave, somebody said, "Don't say that Krista turned 36. Why don't you say she was turning 26?" I saw Jim going in to grab a beer, and I told my friend who showed up late how Jim made an excuse not to arm wrestle me when I challenged him earlier. He stopped and took off his jacket. I started getting a bit nervous, especially when I saw his muscular arms. He rolled up his sleeve as I tried my best to laugh naturally and wipe the flop sweat away. But when he rolled up his sleeve, he pointed to a giant scar that went up his arm to his shoulder. He explained how he'd had surgery on his rotator cuff.

I'm not sure what a rotator cuff even is, but I'm just glad he didn't hurt me. Another big guy who wouldn't hurt a fly.