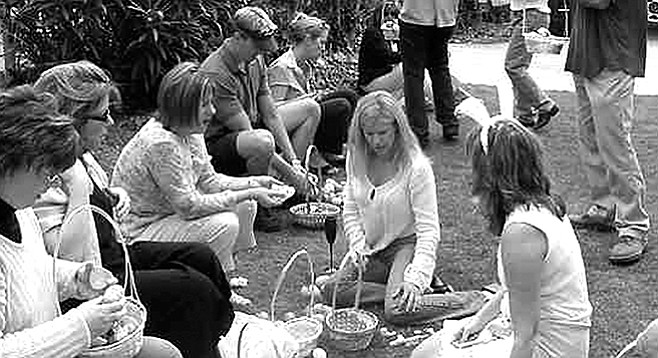 I got an e-mail invitation to an adult Easter egg hunt party from Richard and Andrea. At the bottom of it, it stated, "Bring a signed release slip from your parents or hop on over!" I headed over to Pacific Beach with my mom's signature forged on a note, as we did back in high school.

When I saw the crowd for this ninth annual party, some were senior citizens and other conservative-looking folks. I asked Andrea if anyone ever got offended by the X-rated items they put inside the Easter eggs. She said, "No, no. We know everyone that comes, and they know what this is about. One year, though, they were doing construction across the street. And we hid some eggs inside the Porta Potti.

And a little girl playing outside found the egg. We yelled for her not to open it but to give it to her parents. Luckily, it was one with just chocolate inside."

Richard told me, "I realized this year I didn't have enough stuff for the eggs, so I called Love Shack [they sell adult items]. They weren't even open, but the owner said he'd open early for me. He even gave me 30 percent off."

The back yard of this house was huge, with lots of trees, flowers, and bushes — lots of areas to hide eggs. I noticed, as people were talking, they'd glance around, trying to locate the eggs. Richard says, "Oh, yeah, you're allowed to scope the area out. You just can't pick any up until we give out the baskets. And we always have cheaters. You see people pushing each other and running around like a bunch of seven-year-olds."

I heard lots of people talking about previous egg hunts. One said the grand prize — for finding one of the three "golden eggs" — was a giant TV. Others laughed at the old, crappy refrigerator

Richard has been trying to give away for the past three years.

Richard said, "One time, I was doing yardwork and found a two-year-old bottle of tequila we had hidden years earlier that nobody found."

Most of the booze comes in those small airplane-sized bottles, which require taping the egg shut to keep it closed. Other eggs had condoms, lubricants, gummi boobs, and a variety of other sexual things.

When I asked about people who refused to attend because of the theme, Richard laughed and said, "Two of Andrea's friends didn't show up once, but that's because at the top of the invitation I put 'Brought to you by the PB Yacht Club.' There is no PB Yacht Club; it's just a fake thing I made up and have been using the name of. Her friends said, 'We like to drink and have fun at parties. We heard that yacht-club crowd is snobby.' She had to tell them we were the yacht club."

The kitchen was filled with all kinds of food, from shrimp to chips and salsa. And there were lots of coolers with every kind of alcohol you could want — beer, wine coolers, and wine. Along with the small bottles of booze in the eggs, they gave away 20 bottles of Cabernet and 20 bottles of Merlot as bigger prizes — if you found a slip of paper in a hidden egg. And, along with the same refrigerator Richard has been trying to dump as a grand prize, this year he put a $50 gift certificate inside it to tempt the winner into taking it. I saw him get a dolly and wheel it to the winner's car, saying, "I hope you have a truck to haul this thing."

Since it was such an elaborate party, I asked Richard how much he spent putting it all together. He said, "Between $600 and $700. Those little bottles are $1.25 each, and we get lots of those. But it also forces me to do my spring cleaning, which is an additional cost. All those flowers in my back yard — I just put those in a month and a half ago. I had to do some landscaping to make the back yard look better."

Once the rules were explained to everyone, the egg hunt started. Richard blasted song by KC and the Sunshine Band, which was the cue to run. They dashed to the front yard for baskets, and then into the back yard. Two different people asked if there were eggs on the balcony. Andrea had said there were none on the second level, but possibly on the third level. When somebody asked Richard again, he said, "These people are like kids; they don't listen. The eggs are everywhere but the second level of the balcony." The person responded, "Does that mean there could be some on the third level?" Richard rolled his eyes and repeated himself.

As KC and the Sunshine Band started singing, "Do a little dance / Make a little love / Get down tonight," everyone was running around picking up eggs.

One lady didn't have a basket, and Andrea told her that was against the rules. She just kept stuffing the plastic eggs into her shirt, and when she was done, she looked like Dolly Parton at age 80.

One guy opened a tool box near the side of the house and found eggs in there. Another was climbing a tree in the front yard. I joked with Richard about lawsuits if anyone got hurt. And when he joked about trying to give away the old refrigerator nobody wanted, I said, "Most people have garage sales to get rid of their crap. You just save them for the grand prizes." He laughed and said, "One year I rigged it so the guy with the truck would win."

There was also a bonnet contest with a $50 gift certificate as a prize. The winner was a lady who had put a rabbit on her hat, with a carrot in a weird place. She also pointed out, "There are fornicating geese all around it, too."

As the ladies showed off their bonnets, others were looking at the goodies inside their eggs. One woman complained she didn't need the condoms she got, and everyone ended up giving theirs to another woman. She had a pile of 20 in front of her on the lawn.

This party wrapped up in the midafternoon, giving me enough time to head a little bit south to Ocean Beach for a party at Dusty Rhodes Park. It's across the street from Robb Field.

When Andie invited me, she said it was going to be a party for adults and kids. Her son Taj was turning one. But she told me she had a kids' pinata and an adult one. When a guy broke open the "adult pinata," I was afraid, with all the kids around, that they would see the items. But I was still thinking along the lines of the previous party. By "adult" she meant things adults could use, like soaps and candles. It seemed as if the adults beating on the pinata had a harder time breaking it open than the kids did.

The reggae band Vegitation was playing here. They had two drummers (one playing bongos), two guitars, bass, keyboards, and a singer (with dreadlocks, of course). Lots of people at this party had dreads, long hair, or long sideburns and beards. And with the tie-dyed tablecloths, a few times I looked around and it reminded me of Woodstock. Having a band at the park was interesting. People riding bikes would sometimes stop and watch for a few minutes before continuing on. Another guy said, "It's funny watching this band play with a slide, swings, and playground as a backdrop."

The band sounded great, but I made the mistake of telling one person I thought all reggae songs sound the same. He went into a big explanation of the different forms of reggae and Bob Marley having a message in his songs. He went on for 45 minutes as to why I was wrong. I enjoyed talking music more with the guy wearing a T. Rex shirt. That's a great band that only gets airplay in the U.S. for "Bang a Gong." I avoided the guy wearing the Slayer T-shirt.

There were lots of vegan dishes on the picnic tables, and they were labeled. I stayed away from the desserts that were vegan, which included the raspberry bars. When I was eating the cake near a guy I knew was a vegan (a vegetarian who not only won't eat meat but won't eat anything that uses animal products — including milk or honey), I asked him if he's bothered being around people who aren't vegans. He said, "No, not at all. My family isn't, and it's just as hard for them

to understand me. It's like religion. I think religion is wonderful and brings people together. I just hate when people can't get along with others belonging to a different religion. People that think you will go to hell because you don't follow the same religion as them. I work at a restaurant, and it isn't a vegan place."

Since there were a lot of younger people at the party, I asked about a guy who looked to be in his early 50s, who was dancing to the band. Somebody said, "Oh, that's Jim Bell.

He ran for mayor. Actually, I think he runs for mayor every election." Someone else told me, "He's a well-known ecologist. He's written a few books. And he always comes to our events. He's a pretty hip dude for an older guy."

A few people had dogs running around, and one person complained, "Last time I was here, I got a ticket for letting my dog off the leash. Now I'm paranoid and keep looking around to see if the cops are showing up." Andie was standing nearby, and I said, "Speaking of police, you don't have to worry about them saying the band is too loud, since you're at a park." She said, "Actually, you still need a permit for this. I called and asked. This park is still close enough to where people live. I didn't get a permit, though. If the cops show up, I guess the band will just stop. But when I was talking to them on the phone, they asked me where the party was going to be. Of course, I didn't tell them." She laughed. "They also told me, even parties that have one of those blow-up things kids jump on — you need a permit for that, too."

The singer of Vegitation had a funny line before they sang "Happy Birthday" to Taj. He said, "We don't usually do cover songs, but we're going to make an exception and sing 'Happy Birthday.'"

After that, a few of the kids went over to play Pin the Tail on the Donkey. After two kids in a row were so close, one of the adults said, "This is too easy. We need somebody to play defense." Another guy added, "Yeah, we could have people tackling the kids, or clothesline them. That would make it a lot harder."

I grabbed a non-vegan cupcake and took off.