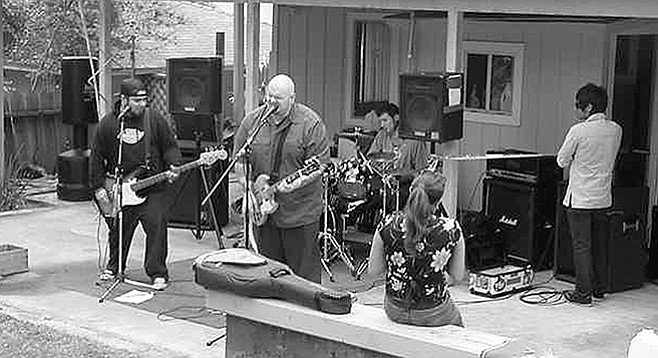 It's nice being invited to two parties on a Saturday when one is in the afternoon and the other is at night so I don't have to rush from one to the other.

The first one was right off the 101 in Leucadia. Three guys in their early 20s were throwing a going-away party for one of their roommates. They also decided to have a bunch of bands play, hoping to make this an annual event.

I pulled onto Grandview and could hear the music coming from the third house over. I couldn't find parking on that street, and when I got out of my car on the next street over I could hear the drums. As I walked over/ a couple was coming out of their house in wetsuits, carrying surfboards, and they looked over toward the music. They shook their heads and headed for the surf. When I got to the house, I could hear the band was doing a great version of the Stooges song "I Wanna Be Your Dog."

There was a girl sitting right at the gate collecting donations from everyone entering the party. She commented on my SDSU shirt and told me she was a psych major there. I told her that I've been there twice looking for parties but never found any. She said, "I know, the campus is considered this party school, but usually it's just groups of people walking around on Saturday night looking for something to do. It's so lame." Two days later, I read in the Union-Tribune about two parties at SDSU being investigated for rapes. Somebody is having parties there; I just haven't found them yet.

This place had a gigantic back yard. The band was set up directly below the patio covering. I asked one of the owners of the house why the bands weren't set up on the top level, where everyone could see them better. He said, "We thought the noise would travel a lot farther.

"We already had to talk to all the neighbors and make sure it was cool with them. None of them complained." Another resident here told me, "Yeah, it's so overcast, we were afraid it would start raining. And we just found out a few houses down they're having a party tonight. They have bands also and an art show. We may turn this into a block party."

The band looked like a bunch of teenagers, and as they finished their set, the drummer kicked over his bass drum. It reminded me of Keith Moon of the Who. I realized that stunt wouldn't have worked if they were on the balcony. Talking with him later, I was surprised by how much he knew about older bands, since he looked to be about 19. One of his favorites was Travis Barker of Poway's blink-182, who recently broke his foot, causing the cancellation of a Japan tour.

Before the next band went on, I walked over toward two couches set up in the grass. One of the guys on the couch was in the band Deafred. He said, "Hey, dude, I met you at a party you wrote about in Pacific Beach. We played, even though it was raining."

I looked over at a group of guys by a shed near the back fence. I walked over and saw that one had a bag of weed. The other said, "We're Just smoking a bowl, man. You want a hit?"

When the next band started, I saw a guy who I thought was roiling joints. It looked like he had purple paper, and he was roiling it, licking it, and rolling it. He did this for a long time. I realized it wasn't a joint when he stuck one in each ear.

A guy came up and told me the band playing was from Oregon. He said, "They came all the way down here just to play this party." He also told me he worked in his dad's furniture shop, but that he wanted to get into voiceover work. I told him that I had read an article about a guy who does movie-trailer voiceovers. He makes over a million dollars a year working from his home.

Drew, the guy this going-away party was for, came over. I asked why he was leaving and he said "I'm going to Honduras. I'm becoming a dive master." I asked why he couldn't do that here, and he said, "I could. But I thought I'd try some warmer water." He had just turned 25 and looked to be the oldest person around.

There was lots of beer at this party, but no food. One girl was walking around offering people beef jerky. When I got hungry, I walked around the corner to a pizza parlor. I saw a cop outside the house talking to somebody. I asked if it was about the noise, and another resident said, "No, he's just telling us that the neighbors are complaining about the way everyone is parking their cars. Some can't get into their driveways."

Next to the pizza parlor was a trapeze school. It was bizarre watching people swinging so high up, with a teacher telling one to let go so the other could catch him. He never did let go, and I don't blame him. He was high up there (even if there were nets). I brought a pizza back to the two people working the door for donations.

By then, things had picked up. At one point, a mosh pit was going on in front of the bands. Others had gone on the balcony to watch or take pictures (although they'd only be getting shots of the tops of their heads).

One girl who looked like k.d. lang kept apologizing to a guy. He said, "It's cool, don't worry about it." She said, "Maybe next time I'll drink water instead of alcohol." Later I saw her run and tackle somebody in the grass. Another girl said, "Being this drunk at 4:00...does that make me an alcoholic?"

People periodically made food runs, and one kid asked his friends if they wanted anything. Someone said, "Yes, I want Yoo-Hoos. Two of them."

When two guys showed up with dogs that wouldn't stop barking, I bailed. They were louder than the bands. The housewarming party I went to was in North Park, so I had a bit of a drive. It was a lot tamer. There were only ten people there, and no bands.

I showed up at the same time as another person. He went on about how much he loved the hardwood floors as we walked in. He said, "The first thing I do is check out floors in a new house." I went to talk to some people in the kitchen, and heard him ten minutes later still talking about the floors.

The two guys who bought this place are a couple. One of them was showing me the artwork on the walls, which looked nice. I especially liked the two small front windows, which I couldn't see out of because they were painted with all different colors. They also had a mannequin of a naked woman with a sunflower for a face.

Nathan, who was showing us around the house, opened one secret compartment. He said, "The women that lived here before us kept pot in here. A realtor was showing us the place, and I opened this. It was filled with marijuana and pipes to smoke it. They were sitting right there on the couch and didn't seem to care that I saw it. I was just thinking about putting flowers in there. They had plants."

A girl in the kitchen was asking how this write-up would turn out with only ten people. She said, "Sometimes bigger parties can be lame. When MTV's Real World was here, we were invited to a party at that place in Point Loma. It took so long to get in there, and when we finally did, it was really lame."

Most of the people were on the back patio talking and smoking. One gay guy was telling a story about going to a dentist to have fangs put into his mouth. He and a few others left early, because they were going to a concert at 4th & B.

I met three women who worked in the hotel business. When one said she worked at the Westin downtown, I asked about Carlos Santana. I remembered meeting a limo driver who told me that's where he always stays. She said, "Yeah, one time he got off the elevator. I said, 'Oh, there's Santana...' as he walked by."

I only talked to one of the two other women who worked in hotels. One we kept forcing back into the kitchen because she was making this incredibly delicious drink. When I asked what was in it, she said "Just Country Time Lemonade, coconut rum — and I rub lime on the rim of the glass."

The other lady was from Kenya. She had just a bit of an accent. She told me she'd worked in hotels for eight years. And she had some funny stories that kept being interrupted by me and a guy named Jessie. He was wearing a Star Wars shirt, and we kept talking about old movies. Even though we disagreed on almost every movie (he liked Jackie Chan and science fiction and hated Christopher Guest films), we had fun debating each other. His wife kept nagging him to leave. They were going to go to Sav-On and pick up medicine for Nathan. He was in his bedroom complaining of stomach pain. He said, "My stomach feels so bloated. I feel like I have an Ethiopian stomach, those ones that stick way out." He later got into a debate with his boyfriend because he had invited an old lover to some previous party. All the remaining guests gave their two cents and told stories about running into old lovers when you were with somebody new.

The party ended before midnight, which was fine with me. ■