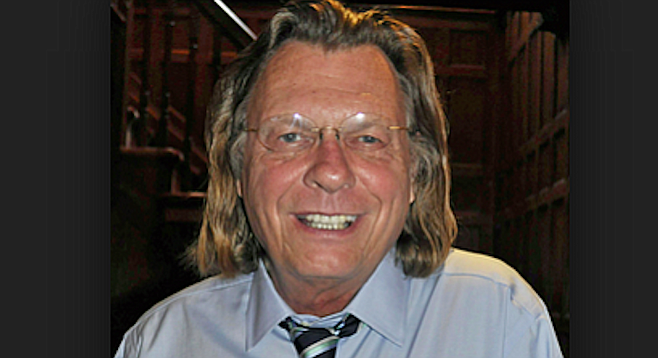 Thomas Lux is a celebrated poet whose tenth book of poems The Cradle Place, contains titles such as “Three Vials of Maggots,” “Birds Nailed to Trees,” and “Guide for the Perpetually Perplexed.” Such approaches to the weird are common in Lux, whose work joins humor and heartbreak in a poetry that speaks direcdy to the reader. For more than 25 years Lux taught at Sarah Lawrence College, and now he holds the Bourne Chair in Poetry at the Georgia Institute of Technology. Over the past eight years he has written about 20 cover articles for the San Diego Reader.

Recently, I talked to him about his new book, asking him first about the role of humor in his work.

“There’s often a very serious side to humor,” said Lux, “and most of the humor that I use is that kind—ironic or black humor, satire. The idea is to make the reader laugh and then snatch that laugh out of his or her throat; to make them feel something intense, but laugh at it in spite of that. One has to be maybe a smart ass or wiseacre, which I certainly can be.”

I asked how his work as a journalist and his wide reading in history had affected his poetry.

“History is something I’m deeply curious about and lots of my poems are based on historical realities. Also in diction and syntax — I’ve been reading a lot of late- 19th-century history and letters lately. The language gets into your head, and certain little things can be transported to contemporary language. Journalism probably affects me in the same way that reading or doing things I haven’t done before has helped me. For example, I did an article on a guy who took pictures of insects, and it led me to read a lot about insects, and I got a couple of poems out of it. There’s a poem called ‘Uncle Dung Beetle’ in the new book that came as a direct result of hanging out with that guy. Writing journalism I’ve gotten to meet people and go places where I never would have gone as a poet or an English professor.”

Lux’s first book of poems was Memory’s Handgrenade published in 1972.1 asked how his work had changed since then.

“I jokingly refer to myself as a recovering surrealist. I think my work has deepened, and certainly my craft has gotten better. My first book was essentially a surrealist book influenced by surrealist poets, and I’m just not interested in that anymore. It’s also a matter of growing up, walking up and down the planet, learning to care about the world.”

I asked Lux how a poem came to him.

“Mostly it begins with some little fragment. Often a title will pop into my head from something I overhear or read. For that title to make me want to explore it, it has to have metaphorical possibilities, to be metaphorically exploitable. Then I begin poking at it to see where it goes. I work very methodically, draft after draft, usually working on a group of poems at a time. It’s a very workmanlike, lunch-pail way of writing. There’s nothing glamorous about it. When I’m done, there’s no syllable, sound, word, line break, or anything that’s arbitrary. Everything’s where it is for a reason, often for a couple of reasons, trying to combine musical elements, rhythmical elements, and so on, whatever helps to heighten and intensify the poem’s argument or theme, quarrel or nuttiness.”

I told Lux that some self-styled Post-Modernist poets had described him as being too accessible, and I wondered what he thought about that.

“I don’t think a poet can be too accessible. The whole point of writing is that you’re trying to make a kind of bridge or communicative connection to a reader. One of the easiest things in the world is to be inaccessible, to be oblique, to be obscure. I guess I’d say to those people, ‘Too bad. Sorry you don’t like it.’ If the poet is afraid to tell the reader what he or she loves, hates, fears, believes, whatever, I think that’s a form of artistic cowardice, arrogance, and laziness.”

Finally, I asked why poetry didn’t seem as popular as it had been earlier in the last century.

“Because much poetry is arbitrary, obscure, and inaccessible. It makes people feel stupid. That has a great deal to do with Modernism and Post-Modernism, even though many of the Modernists were great poets undeniably. A lot of people, particularly of our generation, grew up thinking that poetry was some kind of riddle. The poet never said what he or she meant, and you read poetry in order to decipher it. Who wants to do that? Poetry should be exciting; it should be fun. We read a poem for the pleasure of reading a poem, for the ride it takes us on. Emotion is one of the most important things, if not the most— we want to be moved, to be thrilled. That’s why we fell in love with poetry, right? I didn’t fall in love with poetry because it gave me a secret meaning to life or anything; I was moved and excited by it, and I wanted to try and do that myself.”