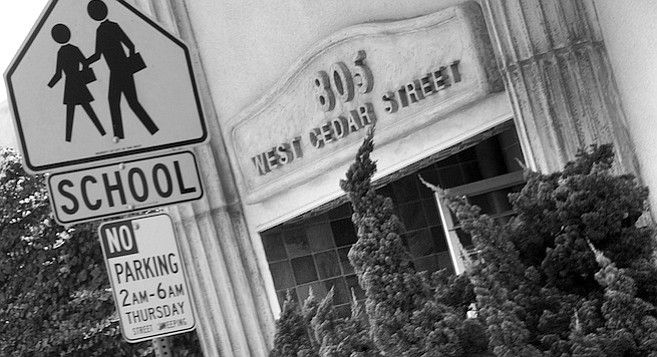 Mercy Hospital in Hillcrest operates one of the largest AIDS clinics in San Diego County. On any given day, some of its patients can be seen milling about in green hospital gowns near the paths, fountain, and rose garden in front of the hospital, sometimes with IV racks in tow. Meanwhile, less than three blocks south, in the Club San Diego bathhouse at 3955 Fourth Avenue, some claim that the disease is being spread — intentionally and unintentionally — through anonymous, unprotected sex and intravenous drug use.

Though many large cities in the United States shut down their bathhouses, and though after on-site investigations in 1987, the military declared the city's three bathhouses to be off limits to all military personnel at all times because of "increased health risk of sexual diseases," San Diego has never banned bathhouses in the 22 years since the Centers for Disease Control and Prevention first issued a warning about a type of pneumonia — dubbed GRID for gay-related immune deficiency — occurring in the Los Angeles gay community. GRID later came to be called AIDS for acquired immune deficiency syndrome. And, as it became an international epidemic, many disease researchers concluded that it was being communicated in bathhouses. Still, it was only amid extreme controversy that San Francisco was able to shut down its bathhouses in 1984.

"I was in those San Francisco bathhouses in the late 1970s," says James Hartline, an HIV-positive Hillcrest man who is campaigning to get San Diego's three bathhouses shut down. "Those bathhouses were a big part of the generation of the gay scene in San Francisco. Bathhouses to the gay community are kind of what the Declaration of Independence is to the United States. They're part of the whole foundation from which these gay communities evolved because they represent everything that the gay community is about, which is sexual liberation with nobody telling you what you can and can't do. So when you attack the bathhouses, you're attacking the gay agenda."

Hartline is a tall, thin, energetic man who speaks and moves more quickly than the average person. His opposition to bathhouses is fueled by his Christian faith and by his belief that he was infected with HIV in a local bathhouse in 1997, a claim he says he can document. "I was having weekly blood tests at the time," he explains, "as part of a medical study I was participating in. So I could pinpoint, almost exactly, when I contracted the disease."

For than more 20 years, beginning as a 17-year-old in Reno, Nevada, Hartline was a frequent patron of bathhouses. As a youth, the State of Nevada had removed him from an abusive home and placed him in a halfway house. At night, Hartline says, "I was going to this park and these older men would cruise me...pick me up. Then one of them asked me if I liked to dance and I said, 'Yeah, I love to dance,' so he took me to a bar. For the first time in my life I had adults who said they liked me, who actually paid attention to me, and said they were attracted to me, and that seduced me and locked me right in. Well, one of these men told me about this place where you could have all the sex you wanted, which was a gay bathhouse. So I went there, and I was only 17, and this older person that worked there would just let me in for free. So I began to have constant sex."

Hartline spent the late '70s bouncing back and forth between Reno and San Francisco. "But, because I had no life skills, no job skills whatsoever, I started stealing to support myself. When I was 18, I got caught stealing, and they put me in the state penitentiary in Carson City. And the whole time that I was in prison, I was young, I was effeminate, and I didn't know anything so I got taken advantage of a lot sexually and got involved in homosexuality all the years I was locked in prison, which just fed this whole thing. So, what happened in 1982, when I had finished doing prison time in Nevada, I left the state and came to California and worked my way down the coast from San Francisco to San Diego."

When Hartline got here, the gay community was in the midst of a migration from downtown to Hillcrest, so he settled in the latter area. "For the first time," he recalls, "I was exposed to methamphetamine, which was all over the gay community in those days. And I was able to get all the meth I wanted at the bathhouses because drugs and sex are married in these places. Methamphetamine allows people to have sex for two, three, four days without stopping. It causes a complete release of all the sex hormones. That's why methamphetamine is oftentimes referred to as the gay drug. It's epidemic in the gay community. It allows people to live out, for days at a time, constant, nonstop sex."

Hartline isn't alone in this view. In a June 2001 Washington Monthly article, San Diego freelance journalist (and professed homosexual) Andrew Webb blamed a resurgence in the rate of AIDS infection -- a resurgence that is still underway -- in part on a belief, in and out of the gay community, "that when a man has consensual sex with another man and gets infected, it's his own damn fault. (I admit I lean in this direction, and have long accepted that if I were to become infected, it would be no one's responsibility but my own.)"

Webb, who could not be reached for comment, went on to document a growing trend toward "barebacking" -- having anal sex without condoms -- and he related conversations he'd had with HIV-positive gay men who preferred it. "One of these men," Webb wrote, "said he preferred his partners to be HIV-negative because of the psychic thrill he got from knowing he might infect them. In addition, he said, he prefers that his sexual partner not know he is HIV-positive; he gets a kick out of possibly infecting someone who doesn't know he's getting infected. 'I think it's a power thing,' 19-year-old Zach told me. 'Normally, I like to be the one who is totally dominated, but when I'm topping a guy I like to know that what I'm doing is changing his life, especially if he doesn't want it to be.' "

Knowingly transmitting the AIDS virus is a felony, but so far, only heterosexual men have been convicted of it.

Hartline believes that the barebacking ethic is especially prevalent in the bathhouses, where, he says, anonymity and lack of consequences are part of the attraction. That, he believes, makes those establishments hotbeds for AIDS transmission. His belief would seem to be confirmed by recent studies in Los Angeles. "Men at gay bathhouses in [Los Angeles County]," stated an August 3, 2003, Associated Press report, "tested positive for the AIDS virus at a rate twice that of men tested in public clinics or community-based agencies...of 916 men tested at two Los Angeles bathhouses between May 2001 and December 2002, 102 of them were diagnosed with HIV."

Curiously, the immediate response from Los Angeles County health officials was not a move to shut down the bathhouses, but a proclamation that they wanted the bathhouses to stay open. "It's a great place to do more intervention and prevention work," explained Trista Bingham, an epidemiologist with the Los Angeles County Department of Health Services.

Terry Cunningham, director of San Diego County's Office of AIDS Coordination, agrees with his colleague to the north. "We have contracts with community organizations to do outreach into the bathhouses and to conduct risk-reduction workshops. We have a team of health educators and outreach workers who provide one-on-one, risk-reduction education sessions with the patrons as well as conducting outreach. The reason we're doing that is that we realize that it's a high-risk population that attends bathhouses and that there are men in [the bathhouses] who are on the down low, meaning they don't identify themselves as gay, but they are having sex with men. And the only way to reach these populations -- who are definitely at risk for transmitting the disease to their heterosexual female partners -- is by getting the education in the bathhouses."

Asked whether it would be simpler and more effective to shut down San Diego's three gay bathhouses -- Club San Diego, the Mustang Spa at 2200 University Avenue in North Park, and the Vulcan Baths at 805 West Cedar (across Pacific Highway from the County Administration Building) -- Cunningham answers, "When San Francisco shut down their bathhouses...one of the things that was the offshoot of that was that several private places opened where anything went. I mean, there were places that opened that were basically bathhouses in somebody's home. If they're underground like that, then you can't get in there and do any type of educational seminars or monitoring or one-on-one counseling or even handing out pamphlets. Because it's an anything-goes environment."