History of the Eucalyptus in San Diego 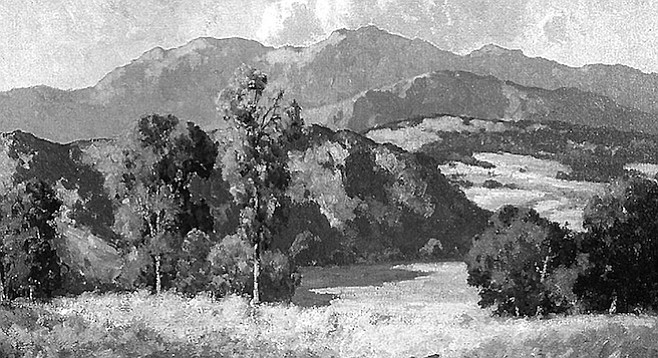 Between 1905 and 1912, San Diego had a “blue gum boom.” Investors planted hundreds of thousands of eucalypti, hoping to cash in when the trees matured. Balboa Park got its crown of sugar gums during this period, as did Rancho Santa Fe, Carlsbad, Escondido, and Vista. Plantations grew. Timber companies sold stock.

Shady dealers bought poor land, at $15 an acre, and seedlings at $5 for a thousand. They planted the trees, then sold the land for $250 an acre. The California Eucalyptus Timber Company, for example, promised that “a judicious investment will make you more money than can be made on the best farm.” Plus, it didn’t involve work. You just watched trees shoot up like bamboo. After ten years,the hardwood groves would yield “at least”$2500 an acre.

San Diego’s early landscape painters— Maurice Braun and Charles A. Fries — got labeled the “Eucalyptus School,” a derogatory term based on their penchant for painting groves of the stately trees.

Born in 1888, Max Watson was a teenager when the boom hit. In the summer of 1905, between his junior and senior years at Russ High School, he worked on a ranch in Alpine. The owner, Mrs. C.E. Foss, had planted eucalyptus seedlings from Australia as part of a statewide University of California experiment. By accident, Watson became fascinated with the “miracle” tree. He loved its lantern-shaped seed pods, lofty branches swaying in the wind, aggressive growth, distinctive aroma, and its uses. Charles Louise L’Neritier de Brutelle named the tree from the Greek words eu (meaning “well”) and kalypto (“I cover”). During the boom’s frenzy, Watson and many others became convinced the eucalyptus could solve problems from “hardwood famine” to malaria.

San Diego’s native trees are the Torrey Pine, cottonwood, willow, alder, live oak, and sycamore. But most of San Diego was treeless in 1906. It resembled the bald, rolling hills east of Miramar and north of SR-52. And the growing town’s need for firewood and charcoal threatened to decimate every tree in the region.

When Watson was still in high school, he met Frank Waller, the famous horticulturist who traveled throughout California cataloging and photographing native trees and gathering their seeds. Watson had no idea such devotion — what Albert Wilson calls “forester evangelism” — was feasible. The meeting inspired Watson, writes Wilson: “with a vision of life-work nursing the eucalypti for California.”

After graduating in 1906, Watson began a small nursery. One of his first jobs: plant seven acres of eucalpyti in El Cajon. He worked from 7:00 a.m. till sundown, planting 680 seedling trees per acre. “I had the ground plowed and graded level. Then I marked off where the trees were to go. A helper laid the trees down at the mark; each seedling had a little ball of soil attached to the roots.” He crawled from marker to marker, his knees “fortified“ with gunnysacks, troweling holes and planting 5000 trees by hand. Because spring rains had been plentiful, “There was enough moisture in the soil to enable the seedlings to catch without my having to use the watering can. I lost very few.”

His next project was “a real disaster.” The Richardson Nursery of Fullerton hired Watson to plant 160 acres west of Bakersfield. People assumed that the hardy tree could sprout anywhere. But just as shady dealers tried to grow eucalypti on poor land and failed, the Bakersfield soil had a high alkali content. “Every seedling flipped over…all down in 24 hours.”

After that setback, Watson rode the boom like a wave, but his thinking wasn’t monetary. He believed that vast groves of eucalypti could change wind patterns and cool summer temperatures and that its oil might replace quinine. Between 1906 and 1908, he planted in the San Joaquin Valley but dreamed of a eucalyptus “wilderness” in San Diego.

His perfect site was 7000 acres of pueblo land — city-owned property — on and around Torrey Pines Hill, overlooking the Pacific,15 miles north of San Diego. The alkali-free soil was ideal. Between 1908 and 1910, he campaigned. Wilson: “He told the City Council how in Germany and Sweden cities had provided enough money from the sale of lumber grown on their own lands to ease taxes. He estimated that in ten years, each seedling tree would become worth $5.” In October 1910,the City Council named the 22-year-old Watson “Pueblo Forester” and okayed his proposal.

Watson surveyed the area, from the bluffs overlooking the ocean to the hillsides and eroding canyons sloping to the east. Four-team horsegraders cleared the terrain (Watson chose his site over inland mesas because the brush was less “tangly”). His team then cross-ploughed and harrowed the exposed soil.

Robert LeRoy Santos, an expert on California’s eucalpyti, calls Watson “an extraordinary man with varied interests” who “planted many thousands of seedlings with his own hands.” In May 1911, he sank 40,000 into the prepared soil but couldn’t do it alone. No one’s sure when he got the idea, but for his planting team — with the approval of Judge Puterbaugh and Councilman Percy Woods — Watson used prisoners from the city jail. They lived in tents. Few ran off. “We worked them hard for ten days,” he says, “fed them well, paid them $5, and then released them.”

“They were mostly drunks,” writes Wilson, and Watson found himself “involved in a fascinating new problem in which he was gaining surprising success. This turned into what was called the prison idea: lively work, fresh air, sunshine, good food, and devoted medical care.” In effect, Watson was among the first to advocate rehabilitation of prisoners. His program received statewide attention, and when authorities came to San Diego to see his efforts, they were impressed by his results and that he was still in his early 20s.

Wilson: “Equally impressed were lively utopians certain that the problem of unemployment could now be simply cured. All they had to do was send 15 to 20 thousand unemployed to work for Max Watson on the city’s Pueblo lands. This happy plan was missing several cogs. But the down-to-earth work which inspired it went on and steadily grew.”

A year after the first planting, the hillside had 40,000 eucalypti, from four to eight feet tall. Watson added 28,000 more seedlings that spring, plus 25 species of “ornamentals”— including Torrey Pines and palm trees. As the years passed, the miniature forest sprouted to maturity.

During those years, Watson campaigned for conservation. He wrote about the environment for the San Diego Union. With the passion of a lover, he pleaded with state officials to preserve acreage for the public. To save the endangered Torrey Pine, Watson was instrumental in convincing the Scripps family to donate priceless coastal bluffs for what became Torrey Pines Park.

Typical Watson: in 1912, Balboa Park became a “eucalyptus stronghold,” as thousands got planted for the Panama-California International Exposition of 1915.Watson applauded the work — especially including yellow box eucalypti, the leaves from which fed the zoo’s koala bears. But, he asked in a newspaper column, “Why all that money and leave the approaching streets treeless? Why don’t we have an ordinance for street planting the way all these other cities do? San Diego can grow any kind of tree that they can, and there are dozens of good ones suited for this climate.” San Diego got the ordinance.

His efforts with prisoners landed Watson a job in Sacramento: secretary of the California Council of Social Work.Wilson: “Then followed State Civil Service, in which he became the first salaried social worker.”

In 1927 he became the Chief Adult Probation Officer of Santa Clara County and later Director of the Department of Adult Correction. He supervised the Industrial Farm in Milpitas, where he and the prisoners ran a nursery. They grew eucalypti, and Watson experimented with hundreds of trees for various purposes. One example: the trunk of the Acacia cyclops has a rubbery, spongelike quality. When Watson declared it a potential buffer for cars out of control, the state planted tens of thousands along its most dangerous hairpin turns.

Watson retired in 1954. He built a nursery and arboretum, where he grew an estimated 115 varieties of eucalypti. Although he spent the rest of his life in Santa Clara County, he always kept an eye on San Diego. When the University of California chose the forest he and prisoners planted on Torrey Pines Hill as the site of its San Diego campus, Watson proudly told a reporter — and he was right — “Our eucalyptus decided them.”