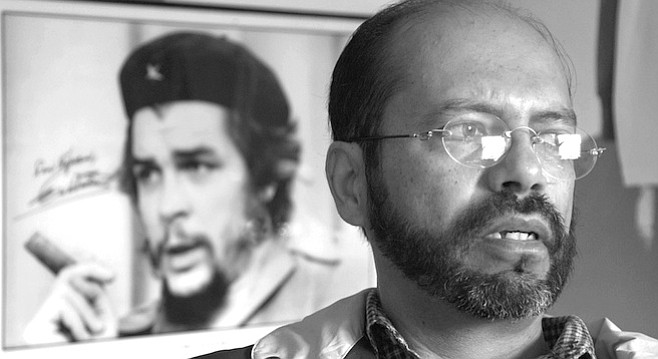 One detects a strange sense of pride mixed with despair and anger when listening to environmental activist Silverio de la Mora talk about Tijuana. Once an electrical contractor who worked on many government contracts and helped build the maquiladoras in east Tijuana during the 1980s, de la Mora then became an official in the National Action Party — better known as PAN — when it took control of the municipal government in the late 1980s. With the change in regime, de la Mora was looking forward to seeing a change in the long-standing system of governmental corruption. "And I can tell you many stories about how we started doing things right," he says. "But as soon as they touch government, many of these guys corrupt themselves, and they continue the same governmental corruption that has always been here. They didn't construct anything. But I reject corruption. Of course, it caused me problems, big problems. But I had and I have the will to make a real change."

De la Mora claims that, since refusing to engage in traditional corruption, he was pushed out of the municipal government and, upon returning to contracting, was frozen out of contracts. So in 1991, he opened a silk-screen business across the border in San Ysidro. "I started a completely different business in my life because I was not going to kneel in front of these guys trying to ask for work. As a contracto, I would have to go to the government and say, 'Hey, Chuy' — Chuy is the mayor — 'Hey, Chuy, I need a job. I need work. Let me do something.' But I would not do it, because I don't agree with some of the governmental action that they are doing right now. So I needed to invest in something else, because I need to eat and I am not going to kneel in front of them."

Sitting in his office, which he built above the garage behind his home in Colonia Cacho, between downtown and the Rio Zone, de la Mora wears a white cardigan sweater and cream dress shirt, which contrast with his gray Dickies and tan work boots. Bearded and bespectacled, he looks at once working man and intellectual. He is known as a leader in the environmental movement in Tijuana largely due to his involvement in efforts to preserve as open space the tercera etapa, which is the southernmost third of the Tijuana River valley, between Rodriguez dam and the international border, and to plant an "urban forest" along the river. The land has since been sold by the municipal government to developers. De la Mora grows animated and his voice rises to a near shout as he recalls the issue. "The PAN came in, and they didn't construct a new government," he says. "They continued the government the way it's always been. It is a tragedy.

"How can an environmental movement exist in such a situation?" de la Mora continues. "You need to have a lot of patience. I am not a patient man, as you can see. But there are others in Mexico and here in Tijuana who do have patience. And that's what you need, because we have a rot in our government. You go to the government and explain the situation, and because there is a lot of interest, a lot of money involved in everything, in the new PAN party, there is a lot of business. Everything is business here. So if you go over and try to explain the situation according to the codes, according to the laws, according to what's right, they don't listen to you — if there is money with the other side of the issue. They are cerrados, closed-minded people. They don't want to listen to codes or regulations or rules or whatever is stipulated in the constitution. So that is why the ecological or environmental movement here has achieved no results."

Olga Martinez, who lives in Playas de Tijuana, would beg to differ. In the late 1990s, she and a group of Playas property residents banded together with a beach-area environmental group called Grupo Ecologista Gaviotas and stopped an effort to build a trash incineration plant on the coast, five miles south of the border. "They wanted to put it at Punta Bandera," explains Martinez. "We didn't want the pollution, and we discovered that they wanted to build it in a seismic area, and there were studies that said there was a high risk of earthquakes. So we fought for our rights, and the federal government finally said no to the incinerator."

Currently, Martinez is involved in another fight against more large plants being built along the coast between the border and Ensenada. "Our biggest problem right now," she explains, "is several plants that Marathon Oil wants to install here in Punta Bandera, in Rosarito, and in Salsipuedes, which is just north of Ensenada. We are trying to get some information on these plans, but we believe that we don't have the infrastructure to accommodate that kind of plant. And our government can't guarantee the security of the people that live here if they build those plants. So we are right now organizing the people, because we have to make the government of Mexico understand and listen to us when we say that we don't want it here. But we don't have confidence in our government."

Martinez is also organizing opposition to development of one of two coastal canyons that run west out of the hills, down through Playas to the ocean. "We have lost a lot of green area in Tijuana," she complains. "That's why we are fighting for those two cañadas here in Playas de Tijuana. They have the native flora and fauna, a lot of wild flowers and birds. But one of them was sold to private interests lately, and they want to build a mall there."

Both Martinez and de la Mora say that these fights against developing open space are extremely difficult in Tijuana, even though the city offers its residents only .22 square meters of park land per resident (as compared to 26 square meters per resident in San Diego). "The government sells these parks to the developers," Martinez explains, "and they give them the permits to build. That is a common story around Tijuana."

Asked where the money from such sales goes, de la Mora responds with an anecdote. "Alejandro Gonzalez, the former governor of the state of Baja California, lived in a modest apartment before being in government. Today, he lives in a $400,000 house. And if you ask him, 'How did you build that house?' he will answer you that he collected his salary checks in order to build that house. To me, and for most of the residents of the state of Baja California, it is a very big story. As they say in Mexico, 'No mames.' Bullshit. How is the environmental situation supposed to advance with such men in our government?"

De la Mora has all but given up on activism and is taking the advice of a police officer who came to his house after he complained about a school operating illegally down the block. "He told me, 'Señor de la Mora, you see this problem in all of Tijuana. The schools open everywhere, with no regulations, with no parking spaces, without anything like that. You have your house. Why don't you put a wall in front and forget about it?' So I am building my wall right now."