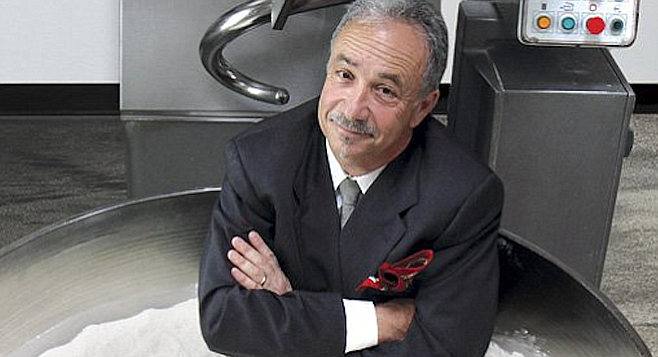 One of the best things about having a friend who’s a chef — better than a window table or the last of the fresh fish — is what they can teach you about cooking. What these people know, they often learn from other cooks...and other cookbooks. To track local chefs’ inspiration, I consulted Tim Klepeis, chef-owner of Adams Avenue Grill. Chefs are busy this time of year, so it took a while to get a call back. I tracked him down at his restaurant.

“T., I want to know what chefs are reading. Chefs around town or across the country...”

“And you’re all reading. Which is why you should call your colleagues and ask them: what, exactly.”

First would be Julia Child’s baking book (Baking with Julia: Sift, Knead, Flute, Flour, and Savor...) which I think is the best and far surpasses the La Brea book (Nancy Silverton's Breads from the La Brea Bakery, Recipes for the Connoisseur), which sometimes can throw you off and make it twice as complicated. Anyway, Julia Child’s book is the real deal; it’s a cross-sampling of all the great American bakers.

The final, which is the least obvious, is the Silver Palate Cookbook (Julee Rosso), just because.

First, The Harry’s Bar Cookbook by Arrigo Cipriani. I don’t know if it’s around anymore, it’s pretty old. But people might be able to find it online. It has basic recipes that are great. Some of the other ones that I use are Todd English, from The Olives Table, great polenta, risotto, simple pasta dishes. Patricia Wells, The Paris Cookbooks, really good soup recipes from different restaurants all around Paris; there’s a brioche recipe I use — it’s a little bit complicated, takes a bit of time, but produces a great brioche. Charlie Trotter Cooks at Home— that’s actually very good. He really goes into a lot of detail. It’s probably for someone more sophisticated in their cooking. He does entire menu for you, gets into ingredient discussion. I like the layout as well.

A couple of new books that I’ve used are by Tom Colicchio (Craft of Cooking: Notes and Recipes from a Restaurant Kitchen). You’re probably familiar with him from Craft in New York, Craft Steak in Las Vegas, Gramercy Tavem — he’s the chef there. Basic principles, very simple, very ingredient-oriented. Freshest product only. It’s all about the food, and it’s more than just recipes; it talks about technique. It explains a lot about why you do things the way you do. Why he likes braising over sauteeing.

Also, Judy Rodgers’s The Zuni Cafe Cookbook. I highly recommend it. It’s more for someone that already has good skills in the kitchen, because it’s very intense: the recipes are challenging, there’s lots of ingredients, lots of steps, but if you’ve been to her restaurant in San Francisco, you know she produces really great stuff.

And Sherry Yard, who’s the pastry chef at Spago and won a James Beard award for best pastry chef last year, has a great dessert book (The Secrets of Baking). She takes it from a basic premise that there’s certain master recipes; off those master recipes you create other recipes, using simple additions and subtractions; everything can be made from that. There are some more complicated things in there. But the array of stuff in there is amazing; it’s a beautiful book.

And finally, Mr. Puck himself has a good book (Wolfgang Puck’s Pizza, Pasta, and More!) for great pizza and pasta recipes — I think that’s the best of his lot.

The cookbooks I use or like a lot are The Food Bible by Judith Wills — good foods for you nutritionally; Cafe Pasqual’s Cookbook: Spirited Recipes from Santa Fe by Katharine Kagel, which are light and easy and perfect for the small galley kitchen like the one I have on the yacht; Seductions of Rice: A Cookbook by Jeffrey Alford and Naomi Duguid; and Cuisine of the Water Gods: Mexican Seafood & Vegetable Cookery by Patricia Quintana, which goes into history and lore about certain regional food. As for food-related books I’m reading, there’s Travelers' Tales: Food — True Stories of Life on the Road, edited by Richard Sterling, and The Soul of a Chef. The Journey Toward Perfection by Michael Ruhlman.

My number-one favorite is Simple Cuisine: Easy Recipes for Four-Star Food (Jean-Georges Vongerichten). That’s a great book. Also, The French Laundry Cookbook. What you learn about the French Laundry and Tom Keller is that he does the best; it may not be something you’ll do, like make a consomme, but it does allow you to take from him the foundation and apply the recipe to whatever level you choose, whether in your home kitchen or the one at your restaurant. I also like Chefs and Cooks magazines; Food Arts is another great publication. I’m inspired by Hiro Sone, who wrote Terra: Cooking from the Heart of Napa Valley. I really like this book because of the recipes’ dean lines.

My number-one book is Anatomy of a Dish by Diane Forley, this book does a wonderful Job of explaining how things go together, I refer to it often and would highly recommend it. Ducasse Flavors of France (Alain Ducasse), simple but correct recipes from France and Monaco; this book offers a great way to put together traditional French cooking, in your home or in a restaurant kitchen. The Chez Panisse Menu Cookbook. I recommend it to people to have at home; it offers different combinations of things. It’s very important because people don’t always know what goes together, you can try something out at home and know what to combine it with. And it’s a great reference book. Harold McGee’s On Food and Cooking, another great reference book; I find myself going back to it time and time again. Sauces by James Peterson, the best sauce book in the world; geared toward professionals but it can also be used at home. The beauty is that it brings you a full volume of sauces and you can work your way to each sauce.

I like The Dean & DeLuca Cookbook (David Rosengarden, Joel Dean, and Giorgio DeLuca). It’s got a killer selection of salads and soups, as well as traditional meals, and from there they do some explanation as to why they use certain items for catering, certain items for display in their stores and retail... they do a lot of different traditional things, like, maybe, a bread salad they had in Tuscany. This is the recipe they use in their store, and it’s the same recipe that’s in the book. I really like the updated Joy of Cooking, because it’s one that I can use in the kitchen to show other chefs how to cook something, like this is the reason we do this basic thing. It’s been around for 30, 40 years, and it’s got a lot of basics, but they did update it, and the updates are really good. They have some Southern cooking, stuff I hadn’t seen before. Most people would say “low country,” and 1 would say, “This is what people here want to try, this is food they don’t usually eat in Southern California.” And then there’s How to Cook Everything: The Basics by Mark Bittman, the great New York Times writer. He’s one of the writers I trust because he goes from traditional to expansive, but he also includes the technique that you can either use at home or, if you’re a restaurateur, you’ll put it right into your own kitchen. One of my favorite recipes comes from The Gift of Southern Cooking by Edna Lewis and Scott Peacock: Southern Pan-Fried Chicken. I’ve actually used it in the restaurant and everyone loves it; it’s true Southern fried chicken.

One of my very favorite cookbooks, perhaps with some prejudice, is The Taste of Country Cooking by Edna Lewis. The recipes are excellent, but the true genius and beauty of this book is in the writing, so evocative of another time and place now gone forever. The childhood of Miss Lewis, granddaughter of freed slaves, in the small settlement of Freetown, Virginia, expressed through the rituals of the seasons and rhythms of the natural world. As much social document as cookbook, a testament to the power of food and cooking and community. The long introductions to the seasons and their menus are poetry, perfect for reading aloud at holiday and family gatherings or, as one friend said, “to have read to you on a Sunday morning in bed by a lover.” Nearly 30 years in print, it is a masterpiece and a classic.

Another favorite book, nearly as long in print, is The Chez Panisse Menu Cookbook by Alice Waters. Radical when it was printed, it helped to fuel a food revolution in this country. I am continually inspired by its thoughtful and well-considered approach to food and its preparation, and especially by the beautiful menus.

My favorite new book is Lost Recipes by Marion Cunningham, who understands like few others the value of the home kitchen and dinner table. We would all do well to take a page out of Marion’s book.