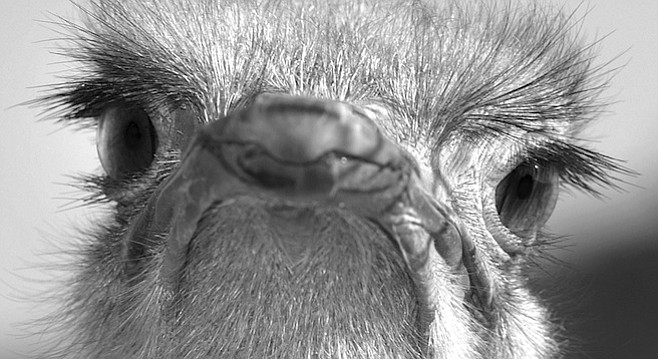 It's hot and it's dry in Bear Valley, in the foothills northeast of Escondido. The grass in the fields crackles underfoot. The live oaks on the hillsides and in the barrancas appear half dead, a mix of brown and green foliage hanging from their boughs. But the ostriches on David Stepp's ostrich farm don't seem to mind the midday August sun beating down on them. Instead of huddling in the shade the way cows and horses do, they stand out in the open, occasionally dipping their heads to root around in the sandy soil with their rounded beaks. And as Stepp walks along the blacktop road that runs past the ostriches' one-acre pens, each containing a male and at least one female, they strut up to the eight-foot fences to investigate. 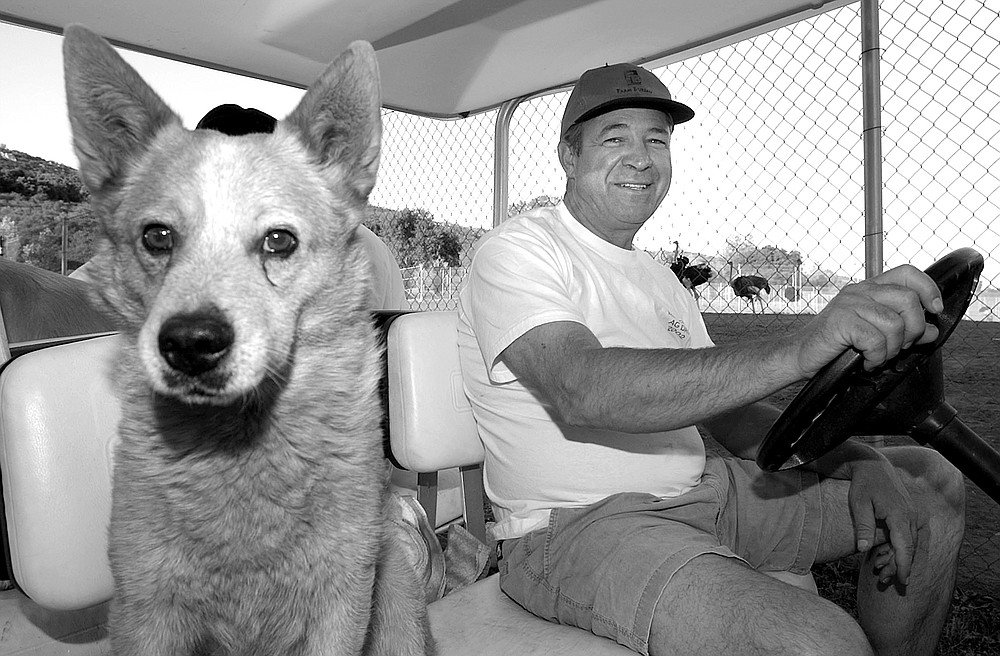 David Stepp is one of three San Diego County ostrich farmers — a group that once numbered in the 30s.

"These are the breeder pens," says Stepp, dressed in khaki shorts, Gucci sunglasses, and a green shirt spoofing the famous John Deere tractor logo. Instead of the leaping stag, the yellow silhouette is a running ostrich. "The larger, black-and-white birds are the males. You can see how their legs, necks, and beaks are a little bit pink. That's because they are just finishing their breeding season, which began in February. During the middle of breeding season, they are bright red where the pink is. 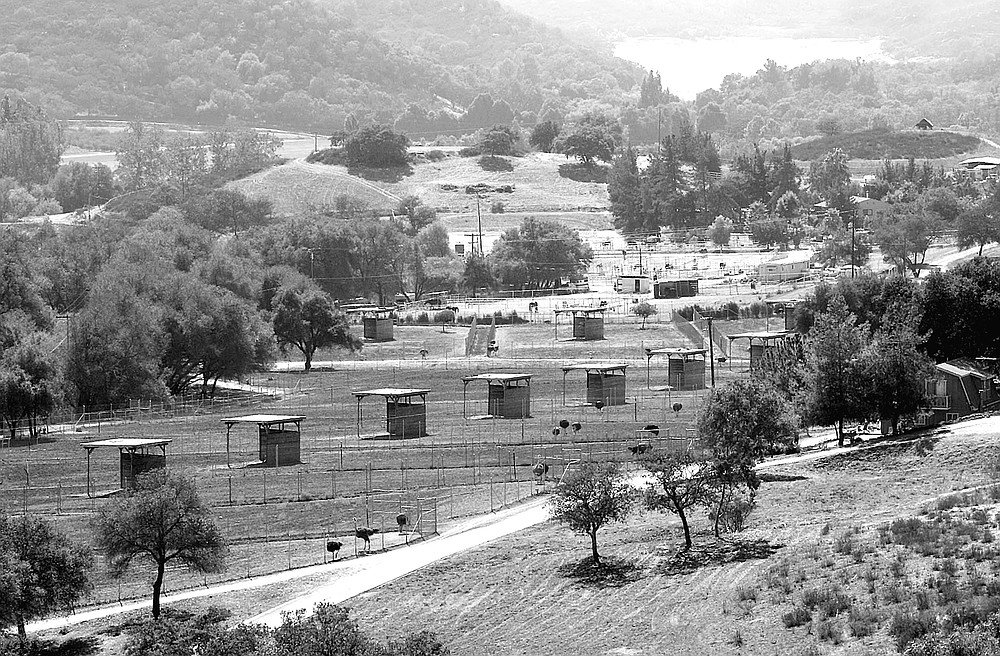 Stepp’s ostrich farm. To "make the farm pay for itself" he grows flowers to sell to florists and pumpkins to supply Bates Nut Farm's Halloween pumpkin business. 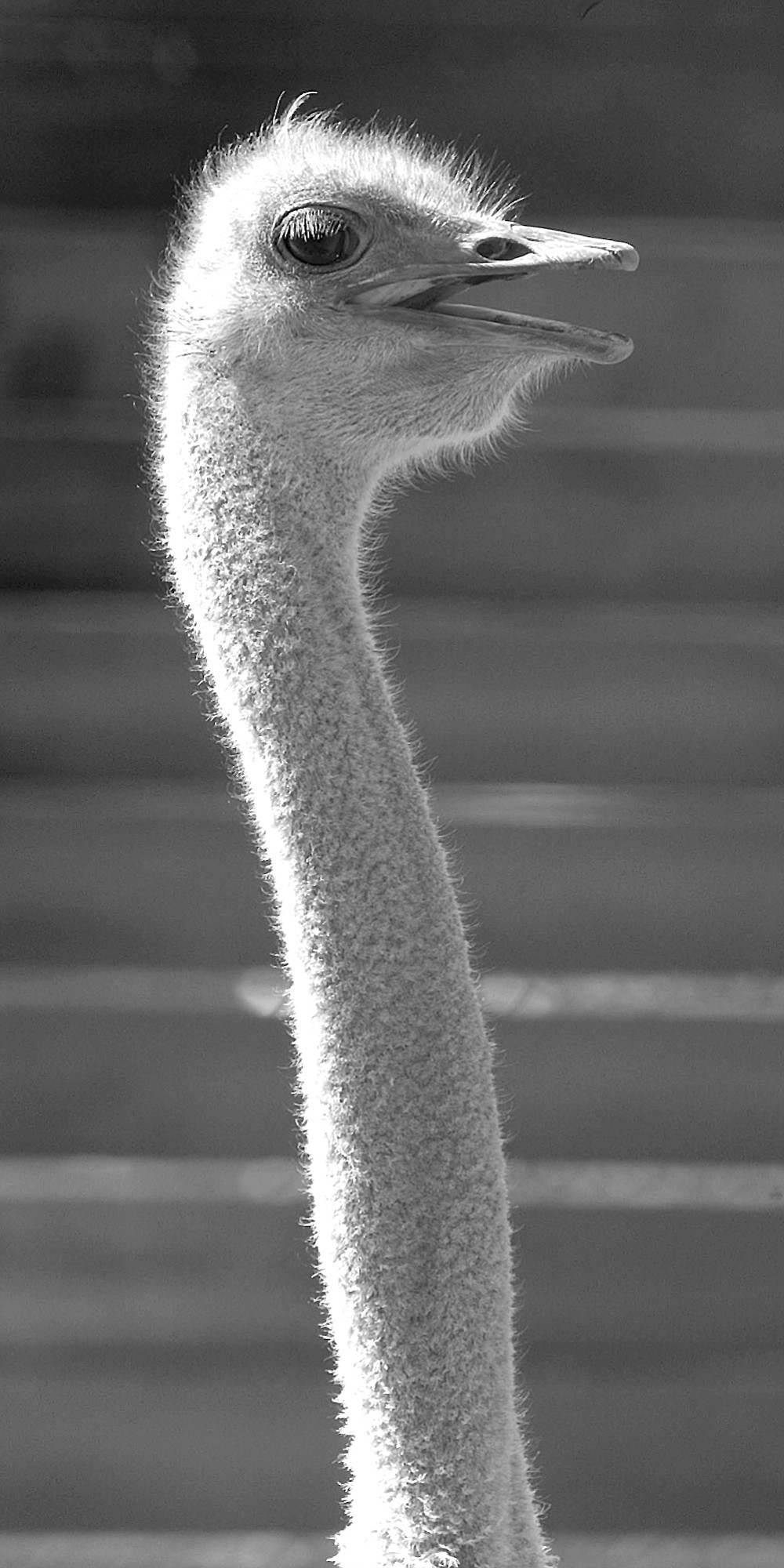 Stepp, one of three San Diego County ostrich farmers — a group that once numbered in the 30s — isn't crossing the two subspecies of ostrich haphazardly but is in the process of establishing a pedigree. "Pedigree for anything — cows, birds, horses — is always the same. You take the most diverse genes in the species or subspecies and you cross those to get an immune system. And then you do five generations of line breeding from that cross. At the end of the five generations, on the female side, you mate the brother and sister from that last line. And then on the original male's line side, you take the female chick back to the original father, and the bird that comes out of that mating, along with the bird that comes out of the brother-sister crossing, that is your pedigree. And from that point on, all the birds and all the animals are about the same size and have about the same reproductive activity. You have a pedigree."

With the establishment of a pedigree, Stepp will be able to predict more accurately how many chicks a breeding pair of ostriches will produce and how heavy the chicks will be at a given age. That will allow him to pencil out beforehand how much money can be made selling the birds. And four generations into the pedigree project, he's already determining some of those numbers. "They have probably 40 to 60 babies a year," he says, "and at ten months old, they weigh about 220 pounds."

At that age and weight, Stepp sells his ostriches to a processor out of Utah for about a dollar per pound. They'll be used for three products: feathers for dusters and clothing, hide for purses and boots, and meat. "A 220-pound bird has got about 85 pounds of meat. And the meat is red meat. Two of the muscle groups taste exactly like tenderloin beefsteak. It is all on the rump and the thighs; there is nothing in the chest, a little bit in the ribs. The rump is where the tenderloin comes from. There is less fat in a serving of ostrich than there is in a serving of trout."

It's that astounding nutritional fact, combined with the relative ease and low cost of keeping ostriches, that caused opportunists to flock to ostrich ranching in the mid-1980s to early 1990s, often shelling out small fortunes to get into the business.

Stepp walks up to the fence of one pen that holds a nine-foot, 425-pound male he calls Tucum, who has a sibling named Cari. They are named after the former location of Stepp's ranch, Tucumcari, New Mexico. "We used to sell these birds, three-month-old babies, for seven grand a pair," Stepp smiles and shakes his head with the memory. "There was a pair, Tucum's father and mother, that sold as a pair in Oklahoma City in 1986 for $225,000. And the next year, the guy made his money back by selling the babies, because the mom and dad had 82 babies. Then he was profitable every year after that."

Stepp continues, "Everyone was going to become a breeder in those days. A lot of cow farmers in Texas, Oklahoma, Louisiana were all buying birds because they were going to be breeders. It happened everywhere."

But, much like the Internet-stock phenomenon of the late 1990s, the ostrich industry turned out to be a false market. There were plenty of investors but no consumers. The feather and hide markets were limited at best, and the meat never became the health-food craze Stepp thought it would. "Man, when we came to California, with all the holistic health stuff here, we thought it was really going to take off." Instead, Stepp explains, "It was a big bust. A lot of people got a little greedy, we all did; everybody wants to make money. Until about 1990, you could still get $2500 for a three-month-old pair. And then in 1992, it slowed down even further, and then it almost stopped."

At that point, most ostrich ranchers got out as fast as they had gotten into the business. Stepp decided to stick it out. It helped that the farm wasn't his only source of income. "I wouldn't make it if this were my only business," he says. "I have a television business, Televideo of San Diego."

But other factors made keeping the farm feasible for Stepp. When the big dollars were swirling around the industry, he used some of his to build a good facility. He made larger-than-necessary breeding pens with high-quality chain-link fencing. And he installed irrigation in each pen to grow a mixture of grains -- "wheat, rye, alfalfa, flax, red clover, white clover, and others" -- for the birds to graze on. He built greenhouses for the hatchlings, and he developed the science of incubating the eggs to maximize hatchings. In fact, his methods are so successful he's developed a manual that "once in a while" he sells for $500 to $600. "And then I know I have a future [consulting] job. Because usually they'll take a shot at it and find out that there are so many variables. Then something will go wrong, and they will call us, and we will go take a walk-through, and we'll say, 'Okay, your nests are contaminated,' 'Your hen is contaminated,' 'Your keeper is contaminating the eggs,' 'Your incubation isn't right....' Whatever it is, we locate the problem for them."

And the low cost of keeping ostriches helped make it possible to keep them when the market fell through. Where a cow eats 25 to 30 pounds of feed a day, an ostrich, Stepp says, eats "about 3 to 5 pounds a day, depending on the time of year. During the breeding season they can actually go down to a pound, pound and a half."

Handling the birds is a relatively simple process, though not without some danger. "Really there is only one danger," Stepp explains. "You see their backward knees. They lift that knee up, and they kick straight forward, and their legs are really strong. They get you with that big toenail, which is very hard. But we never fight with them. If they are aggressive, then we stay away. I tell my keeper, 'If they come up and hassle with you, wait for an hour. Don't test them, because you can't win. They will hurt you, maybe even kill you.' "

Stepp says he learned that lesson the hard way. "I got kicked once. After that I started figuring out better ways to handle the birds."

The chief factor that allowed Stepp to keep his farm, he says, is that he found markets for the meat. "I began selling to Japan, selling to England, selling to Venezuela," he says, "but this past year all my meat went to BJ's Distribution in New York City. So I think it may finally be catching on here in America."

Still, Stepp's ostrich operation isn't profitable. To "make the farm pay for itself" he grows flowers to sell to florists and pumpkins to supply Bates Nut Farm's Halloween pumpkin business. "But," he concludes, "I think we may see the ostrich market start to grow here soon."