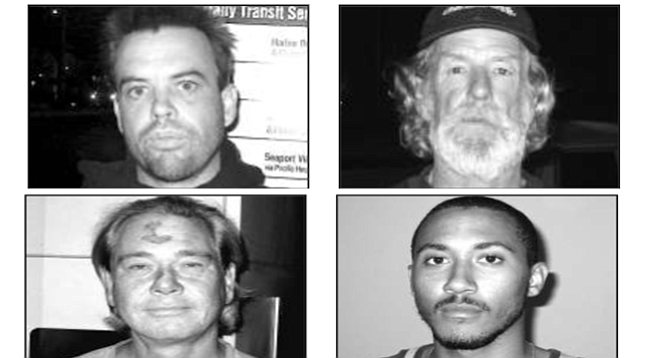 While David Westerfield prepares for life in prison or an endless series of appeals from death row, most San Diegans have overdosed on opinions about his guilt or innocence. One group that has not been heard from, however, is the inmates at downtown's central jail, where Westerfield was held during his trial.

Michael Collins, 34, was jailed for possession of a methamphetamine pipe and spent none of his time watching the Westerfield trial. "None of the other inmates watched it either. We were all wondering where he was. They all thought he was guilty. Me too. With all that forensics evidence? Yeah. You bet your ass. When the law gets you, man, the law gets you. That's all there is to it. He's mental. I have no idea what's going to happen to him. Look at that Night Stalker [Richard Ramirez, who had been on death row since 1989 until his death last week]. He hasn't been executed yet, and he's been on death row for years! If he'd been in our cell, those guys would have tore him up."

At a thin, tall 6'4", with a pimple-covered face and hair standing straight up, Eric looks more as if he belongs in Juvenile Hall than in the Central Jail. "I was in for drug court, 45 days. We could watch the trial if we wanted to, but no one did. We just read about it in the paper. Everyone said he was guilty. It was all the evidence against him. He was striking a deal before they even found the body. I never heard anyone talk about his motives. He's just messed up in the head, I guess. A lot of them would kick his ass if they saw him. He might not live long enough to be executed, but he's in PC [protective custody], so he might. If he'd been in our cell, as a guy who killed and molested a little girl, he would have got seriously beaten, at least."

Ralph just walked out of jail but was not in during the trial. "One of the trustees I talked to was moppin' the floor near Westerfield's cell. He [said Westerfield] was totally bummed out. The trustee's exact words were 'shot out.' He was down the tubes. He had a remote-control bed and color TV in his cell. Nobody really talked about it, because everybody knows that he is guilty. If he had been with us, it wouldn't have been very nice after we got through with him."

Marcus, a small, wiry 53-year-old, bounds out of the jail-release door on a mission to get cigarettes. "I was in for five days. I violated a court order, being drunk where I wasn't supposed to be." Unlike Eric, Marcus says that most of the inmates watched the coverage of Westerfield's trial. "They all said the same thing: 'Burn him alive! Or let him in here and let us take care of him!' You have to remember that the vast majority of people locked up in there have kids of their own. We know he was guilty. The guys that I discussed it with said it all came down to the blood on the coat. How did the blood get on the coat? And it really pissed everybody off when they heard he was making a deal before the trial. We don't know why he did it, but a couple of the guys think that the pornography drove him to it. It's weird, because I live in Pacific Beach, and two days before this happened, me and some friends were at Crown Point Park, and there were all kinds of kids running around, and we caught a guy masturbating in the bathroom. We chased him out and chased him down, grabbed him, and two little young kids had seen him while they were in there. We threw him down on the ground, called the cops, the cops showed up, ran his name, and, sure as hell, he's got priors for child molesting.

"I thought the jury's death sentence was just a recommendation," continued Marcus. "But the jury only recommends, and the judge gets to sentence him. I mean, if he gets death, it's 16 years, average, before they put him to death. He's the same age as me, and I plan on living at least 20 more years. Maybe he'll get to that point, he gets older, he gets sick, or cancer, or something like that, and they'll say, 'We can't kill this poor old man with cancer!' He could never be put in the general population. If he had been in my cell, he probably would have been beaten to death. But I was in a misdemeanor cell, so I know I'm getting out in a short while. But if they put him in with felons, there's guys in there doing life without parole, and they got nothing to lose. Somebody down the line is going to say, like with Jeffrey Dahmer, 'You go beat him to death, make him feel pain, and we'll keep you in cigarettes for the rest of your life.' It happens all the time. These guys were all watching the trial. If he had been in the felony tank -- I mean, as soon as they came out with the blood on the coat -- if he had been with career felons, that would have been it."

After six days in jail, Jeff, 33, wants to walk in any direction, as long as it's away from the jail. Several times he expresses concern that he's being set up by my questions. "I was arrested on a couple of misdemeanor warrants. I don't want to go back in there, so I hope you're not pullin' no shit on me. I don't want to ever go back in there." When the topic turns to Westerfield, Jeff is more open. "Everybody was talkin' about it. It was all in the newspapers, on television. That's pretty much all they talked about: what's going to happen to him when he gets to the big house, you know. They're not very happy with him, and neither am I. It's unfortunate that there are people out there like that. Not everyone thinks he's guilty. A lot of them think the son has a lot to do with it. More than half the people I talked to had something to say about his kid and that Westerfield wasn't in it alone. I don't think he was either. Some of the guys think the kid did it alone and that Westerfield had nothin' to do with it. I don't understand why they did this or what their motive was. I don't understand why somebody with that much money -- I mean, you know, the guy could go out and buy himself a lady. He didn't have to do that. He had everything a man could want and now look at him. But look at Kurt Cobain: he had $50 million, and he shot himself in the head. People do weird things for stupid reasons."

When discussing Westerfield's future, Jeffrey Dahmer's name comes up again. "But he's not going to make it in [prison]," Jeff continues. "They'll keep him in protective custody, no doubt, but look at what happened to Jeffrey Dahmer. Believe it or not, the 'seals' -- the prison guards -- are the ones that set him up. They sat there and watched the guy do it. If he'd been where I was at, nothin' would have happened. I would have stayed the hell away from the guy, because I don't need anymore trouble. There were 50 guys in there, and not one of them was happy with the case."

Even though he is homeless, Robert Swayze Dalton is glad to get out of jail. At 49, Dalton speaks articulately with an urbane East Coast accent (he later confesses that he was an English major in college). "I was drinking a beer in public, and they had caught me doing that several times. I have to drink it outside -- I don't have a home!" (he laughs) "None of the people I was with watched the trial on TV. We're more interested in music and sports. We get the Union-Tribune delivered to us, so we got all of our information from that. If he goes in for life, it's not going to be long before he's dead, because somebody will get him. It's going to be a long, miserable wait for him to go. He'll be racking his brain, he'll be pulling his hair out: he'll always be looking over his shoulder. I think the death penalty in his case is more humane. The prisoners all thought he was guilty, and so do I. I follow the newspaper every single day. That's my only source of information, really. I've read every article on him. I don't think I missed a day, and I believe the evidence. I think he had a dual personality. In other words, why was he caught with all that pornographic child material on his home computer? You can be one person in public and another person in private. I think that was his release -- his way of letting his hair down, which is why he didn't have so much of it!" (more laughter)

"He's going to go through an awful lot of appeals, because, from what his lawyers have said, there are an awful lot of loopholes that have to be pursued. So it's going to be years and years and years before the death penalty comes through. Probably a decade. If he does appeal, and he does get in the general population, that's the death penalty anyway. If he'd been in my cell, he would probably have just been ostracized, because we were just misdemeanors. We wouldn't do anything because we don't want any more time."

Kent Kline has only been in jail for 24 hours but has no shortage of opinions on David Westerfield. "No one said they watched the coverage in jail, but we were just talkin' about how it's unfair for him to get protective custody. He's not going to suffer any punishment. He's going to sit on death row for 20 years and then he might get killed. The people he's going to run into in the yard are other motherfuckers like him, other Westerfield motherfuckers, other punks, other people who are pussy. Chester the Molesters, you know what I'm sayin'? If they really wanted to make him suffer, they'd throw his ass in GP with the pimps, the players, the hustlers, the pushers, the gangsters, and rapists, and they would whoop his ass. That's punishment. That's called jail. But in protective custody, he ain't gonna have no problem. He's gonna get to chill, and they're going to kill him real quick."

When the question of Westerfield's guilt comes up, Kline posits yet another prisoner's theory. "People think he's guilty, but some people think the girl's mom had something to do with it. I asked one guy, why would this lady want to get her daughter killed for no reason, and he said, 'Why do people do stupid shit?' " Kline has no theories about why Westerfield killed Danielle van Dam. "They'll probably just throw his ass in San Quentin or whatever, let him sit around for 20 years, maybe more. He'll be chillin', won't have nothin' to worry about -- PC'd out. He won't suffer shit. It's not hard, it's easy. If he'd been in with us, he'd probably have got picked on or fucked with or, you know. That's jail."