San Diego is in its driest year of recorded history. 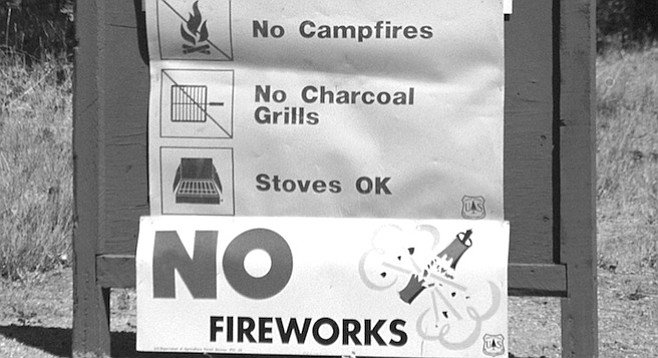 San Diego is not immune to the kinds of fires that have devastated Arizona and Colorado. Richard Hawkins, the chief of fire aviation management for the Cleveland National Forest, believes the potential exists here for similarly disastrous fires. "San Diego County has about half of California's ten worst fire scenarios."

The situation is so bad that San Diego is at the maximum level of fire preparedness, level 5. "Actually, it's the whole nation that's at level 5, and it's unprecedented. We went to preparedness level 5 in June. This doesn't happen every year, but recently it's been happening almost every year. We bring in the U.S. military to assist, and even international helpers. For example, two years ago in Idaho and Montana, we went to national preparedness level 5 and brought in Australian, New Zealand, and Canadian management teams because there were so many fires. We also brought in thousands of U.S. Army personnel to assist."

The other levels are described as follows: "Typically, levels 1 and 2 are during a part of the year when the fire season is only in a small geographic portion of the country. During the winter months, we're usually at national preparedness level 1. That means we don't have a lot of firefighters on duty each day because there's no need, with exception of the southern states. As we get into late March and early April, and the South is still burning, the Southwest, New Mexico, and Arizona begin their fire season. We typically enter level 2. At that level we're starting to bring on private contractors with helicopters and air tankers for the first time. We don't have many of those resources available during level 1. As we get into the month of June, we start to have fires in Nevada and southern Utah and the southern half of California, and that's when the nation starts to go into preparedness level 3. We now have multiple geographic parts of the country with air tankers and helicopters on contract with quite a bit of firefighting going on. Usually not more than 5000 to 6000 of our 25,000 wildland firefighters are actually assigned to a fire. As we get into late July, we go through to late August at national preparedness level 4. That means that all of the geographic areas in the United States are staffed to the optimum level. All the firefighters are on duty, and all the air tankers and helicopters are under contract. All the fire teams are ready to go -- a 25,000-person workforce, primarily federal agency employees with some private contractors. That's the highest preparedness level that we normally operate under."

But 2002 is not a normal year. "At level 5, you pull the plug and ask for help outside the wildland fire service. City firefighters are generally not trained to do this work." To make matters worse, the ongoing drought has raised preparedness levels in San Diego County for the past four years. The last time the Cleveland National Forest declared that fire season was over was in January of 1998. Currently San Diego is in its driest year of recorded history, as is much of the Southwest.

The gravity of San Diego County's fire danger leaves Hawkins uneasy. "This isn't business as usual. If people haven't cleared the brush around their homes, they'd better. Throughout the west, insurance companies are looking at canceling homeowners' insurance as it relates to hazardous fire areas. We're so worried about the consequences of fires this year that we're actually banning campfires at our campgrounds; as far as I know, it's the first time we've done that in the history of our forests. That was a special order signed by the forests' supervisor; just went into effect yesterday. If that doesn't show people how serious the situation is, I don't know what will. This year we are witnessing fires that are behaving in a way outside the realm of most firefighters' experience. When that happens, you have to take extraordinary action."

Hawkins, 50, grew up near the Sierra Nevada mountains and has worked for the forest service since 1971. He has been in charge of the Cleveland National Forest for the past five years. His other assignments have included Sequoia, Sierra, Angeles, and the Shasta-Trinity National Forests. Hawkins spent much of June in Colorado, assisting with the firefighting effort. "I was there working on the fire when they arrested the woman accused of starting it. I have to say that you're innocent until proven guilty, but all the circumstances point toward her being responsible for that fire. I have no comment on the Native-American in Arizona who was arrested. I understand that he is a firefighter who works only when there are fires. Most of the federal agencies have a category of employee like that, but I don't have any facts on that case."

The forest service, in Hawkins's view, does a good job of screening out potential arsonists from their ranks, but some manage to slip through the cracks. "The primary thing is we screen people for past felony convictions, because arson is typically a felony. The problem is, we often don't receive the actual printout on their criminal history until the end of their first year of employment. There's no screening process for temporary employees other than to check for felonies. A more thorough background check is done while they're approaching becoming a permanent employee. That's been the case for my entire 32 years."

The shock of his 32-year career came last year when Jim King, a firefighter from Ramona, was arrested for arson. "My own policy is that I gather all the first-year firefighters in a room and warn them of all the great ways to end their careers -- primarily sexual harassment and arson. Jim King never heard my speech, and that was the first incident of firefighter arson I ever heard of in my career. We were suspicious when we had a couple of fires break out near one of our fire stations last summer, and we immediately placed the vicinity under surveillance. That came to a conclusion a few months ago with a conviction and a prison term of three years." King had no criminal record when he was hired as a firefighter.

"You can't just watch the movie Backdraft and take the movie as fact. There have been a few studies on the psychology behind it -- particularly in the Southeast, where there have been a few arsons in the past. It's related primarily to being volunteers and wanting to be a hero in the eyes of the community. But out here in the West, there is no history of anything like that. There's a well-known case involving a fire inspector, John Orr, in the city of Glendale, that was concluded some years ago with a life sentence [Orr is the subject of Joseph Wambaugh's latest novel, The Fire Lover: A True Story]. He lit buildings on fire and set brushfires. He was writing a book, and a friend of his read a draft of it and realized that he was living his book. That's how they caught him."

No one knows exactly why fire seasons are getting longer and progressively worse, but Hawkins has a few theories. "Having prevented naturally occurring fires for the last century has been very harmful. It's generated a situation where there's just way too much dead vegetation out there to burn up that should have been removed in a past fire. That kind of messed up the natural cycle of fire."

The problem of "urban interface" with rural areas is also a continual problem for firefighters and one that is getting greater scrutiny from local governments. "There are new standards for brushfires going into effect in a lot of areas of the West," explains Hawkins. "San Diego County has recently passed an ordinance for 100-foot brush clearance, and the [Cleveland] national forest is going to that same level next year. We used to require you to clear 30 feet around your house, but that's not possible on small lots. It relates more to new developments and other existing ones where it's possible to do it. The whole idea of urban interface is a huge misconception that the public is being fed by some people who aren't really experts. Urban interface is actually what you see driving up to L.A.: There's a solid area of development directly adjacent to a solid area of undevelopment, and that's the interface between the developed and the undeveloped, but now that's what people are calling any situation where there are houses in the brush. What that really is is called a 'wildland structural intermix,' and that's what makes fighting these fires so hard on us.

"The fire I just came back from near Castle Rock, Colorado, was a threat to 10,000 structures in 72 different communities. These are all little subdivisions that have been built out in the middle of the forest. When you look at San Diego County, there's been a move to prevent that from happening. That Duncan McFettridge guy has run a movement for years to prevent development of the San Diego backcountry. I think the point he was trying to make was, 'Don't let the private lands of East San Diego County all get converted into subdivisions.' They would have to be protected from brushfires, and that's a very hazardous brushfire area. In Colorado, the situation is worse, because there is so much private land interspersed within the national forest lands. That means they're interspersed with flammable vegetation. We've lost over 1000 homes just in the last month to wildfires in Colorado, Arizona, and California. The outlook is for much worse situations to develop."

The most immediate problem of rural brushfires is when a quick-moving fire endangers housing. Much of San Diego's rural housing is broken up into small portions or isolated altogether, as opposed to subdivisions. Protecting homes gets priority over containing the fire — tying up firefighters from stopping blazes early. "Fires move faster than the firefighters sometimes, as we saw at Viejas a couple of years ago and in Fallbrook this spring. A house cannot defend itself without firefighters being there, and that's a mighty bad thing when you live in a county with millions of people, because with fast-moving brushfires, you normally can't marshal enough fire engines quickly enough to put a fire engine at every house. When it comes to bad scenarios in this county, I can name a bunch of them. The fire can be eating up homes before the first five fire engines even get into the area. We could be attacking the fire to put it out, but instead, we lose all of our strength protecting the homes. Of course, these fires get bigger, and some escape us and become huge."

Hawkins would not divulge the areas endangered by those scenarios, fearing that he would ultimately be held responsible should someone use that information to commit arson. "The homeowners groups read the newspapers, and so do arsonists. If an arsonist is looking for a worst-case scenario, I'd sure hate to give it to him. I'm a public servant, and that would be bad public service to state where that would be."