Liberals in the media don't understand terrorism in Afghanistan 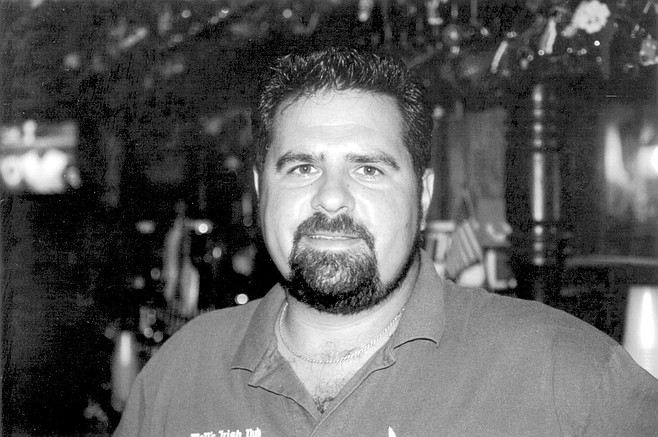 McP's Pub in Coronado, a popular hangout for Navy SEALs, is packed with Marines. With only two women in a bar filled with nearly 70 men, they are having what bartender Tom Latona refers to as a "weenie roast." The Marines are recruiting officers from all the states west of the Mississippi River, visiting San Diego for a recruiter's conference. 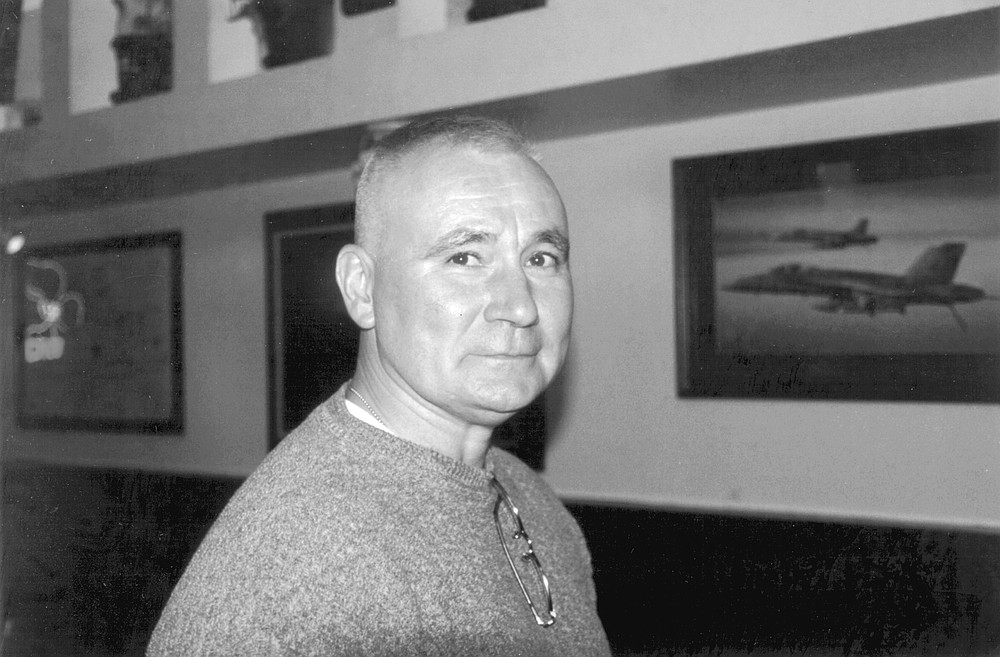 Since September 11, Latona has noticed one difference in the mood of the sailors who frequent the pub. "They finally get to go to the party. All they do is practice, and now they're going to the game." 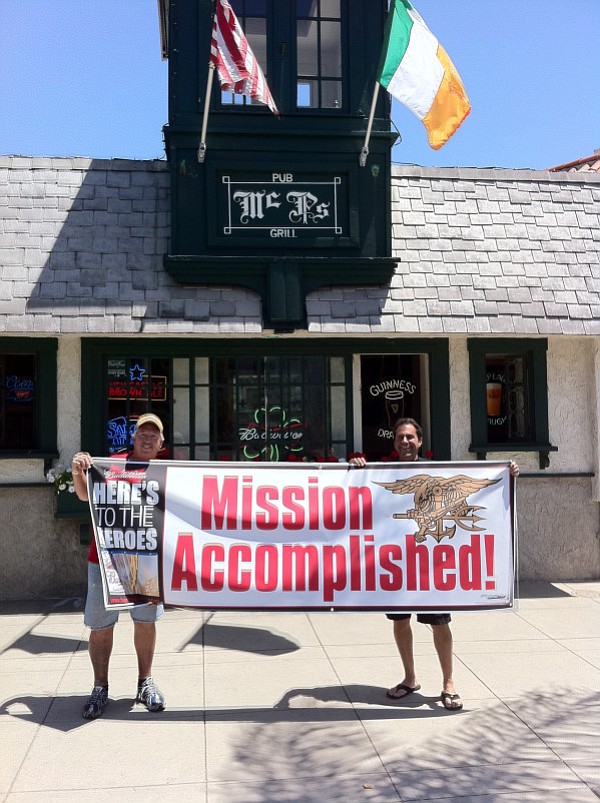 "Some SEALs in Afghanistan were being interviewed on CNN and were asked where they wanted to be for the holidays. One of them said, 'I hope we're at McP's Irish Pub in Coronado, California.'"

Colonel Bob Kuhlow, a recruiter from San Diego's MCRD and chief of staff for the western recruiting region, says that there has been little change since 9/11. In spite of the current epidemic of flag-waving, Kuhlow measures patriotism by the willingness to put one's life on the line. "It's been pretty stable. The flags are all on the surface. We're looking for commitment. The guys in this establishment are some of the best guys that we have — some of the best majors. We've pulled our best-quality guys out because we believe quality begets quality. We're looking for quality individuals, and that's all we have here. In another year or two, these guys could be in Afghanistan — they could be anywhere. Right now, their primary job is to keep the long-term strength of the Marine Corps strong."

McP's owner, Greg McPartlin, a former Navy SEAL, has spoken with sailors who have been in Afghanistan, including SEALs, and is disappointed with the attitude he sees in the media. "I'm flabbergasted that our country is not doing more to let the world know what kind of people the Taliban and al Qaeda fighters actually are. You're hearing these complaints about the prisoners at Guantánamo Bay, that they don't have two pillows or three squares a day or can't pray with their turban on."

For McPartlin, the alleged woes of al Qaeda prisoners pale in comparison to the dangers American soldiers face in Afghanistan. "Several weeks ago, there was a story about a SEAL that supposedly fell out of a helicopter. His name was Neil Roberts. The helicopter took a few hits. He flipped out of the helicopter. They rolled out, the helicopter had to do an emergency landing, and they didn't know he was gone for a while. He hid himself between the rocks until the emergency rescue team realized he was gone and went in to rescue him. He exposed himself to two machine-gun nests and killed [a lot of] bad guys before he was out of ammo and had to surrender. He knew his rescuers were going to be suckered into an ambush, so that's why he got up and exposed himself. He stood there with his hands up and they captured him." (According to Naval Special Warfare Command's public affairs department, an inquiry into the specific details surrounding Roberts's death is still ongoing.)

Besides what he sees as "media bias," what really miffs McPartlin is the double standard he perceives among the Arab nations and American indiffence. "Have you heard any apology for 9/11? No one from the Muslim world has apologized. All we gotta do is go over there and tell them, 'You now have 30 days to convert to Christianity, because this is now the United States of Saudi Arabia and the United States of Iraq!' Without being facetious like that, why did it take something like 9/11 to wake us up? It takes something like that to make us realize that we are vulnerable. That's the price we pay for living in a free society, right? If these guys are getting visas four months after they're dead, then there's something wrong somewhere!"

What's wrong, according to McPartlin, is what he sees as a flawed view by "liberals in the media" who don't understand the high cost of winning the war against terrorism. "We don't want Big Brother putting little chips in the back of our heads, but we sure as hell don't want the general public to criticize our military because of the tactics they're using to win this war. They recently captured the number-two guy to bin Laden, and they ask [Defense Secretary Donald Rumsfeld] how he planned to extract information from him. Now, why is that even a matter for discussion?"

As a veteran of three tours in Vietnam, McPartlin says that war's military interrogation techniques were exaggerated, with tales of torture that were untrue. "Remember those stories about throwing Vietcong from helicopters? What they would do is this: You have a wounded Vietcong and a dead Vietcong in the helicopter. You go over to the dead Vietcong and start yelling at him, and when he doesn't answer, you flip him out of the helicopter. Then the other guy is going to talk fast."

When asked about the morale of the men who have been in Afghanistan, McPartlin shows off some of the posters and flyers that adorn his pub's walls. There's a large photo of hundreds of people in the formation of a U.S. flag that reads, "San Diego Unites." Besides the photos of ships and fighter jets, there are political cartoons, many of them mocking men in turbans. There are also patriotic posters and obituaries of men who died in battle.

To McPartlin, this war seems more treacherous than Vietnam. "It's so open out there that you don't use a lot of hand-to-hand combat on the ground. But in Vietnam, they didn't have kamikaze Vietcong. These people don't care if they die. That's the scariest enemy you can ever have, because if he kills you, he gets brownie points, and if you kill him, he goes right to heaven. That's their attitude, and it's very scary. Look what's happened. You can walk into a cave to check things out, and they can have a detonator and boom! They don't care if they get taken out."

McPartlin is impressed by the attitudes of the men who have returned from Afghanistan. "They are real upbeat. They don't want to come back -- that is, they don't want to come back until the job is done. This thing is far from over. What would you think if you heard that bin Laden was killed last night? Most people would think it was over. That's the mentality. We made a mistake during Desert Storm. We let the media film the 'Highway of Death,' and everyone got all soft in the gut and we didn't finish the job. I don't think the guys in charge now will make the same mistake."

One of McPartlin's favorite stories about the war in Afghanistan happened around Thanksgiving. "Some SEALs were being interviewed on CNN and were asked where they wanted to be for the holidays. One of them said, 'I hope we're at McP's Irish Pub in Coronado, California.' Friends from the East Coast started calling me and telling me that we're all over the news. So I called the public affairs officer and told him, 'Stop calling attention to my bar. I do not want the al Qaeda and Taliban hanging out here!' He laughs. "She was laughing and told me that she was expecting a call from me.

"I'm very proud of our special forces. You gotta realize that these guys have trained for years and years and years, and now they get to do their job. Now they're on the varsity team and they're in the ball game. They do not need to be second-guessed by armchair quarterbacks. Fortunately, in Vietnam, we didn't have that. We had a lot of cameras but not live video being shown back here. In Vietnam, the soldiers got criticized because we didn't know it was the higher echelon that had us fight with one hand behind our back. You have to understand, our military never lost a battle in Vietnam. The government gave up. Do not criticize our military."