In Anza-Borrego's Carrizo Impact Area, bombs appear out of nowhere. 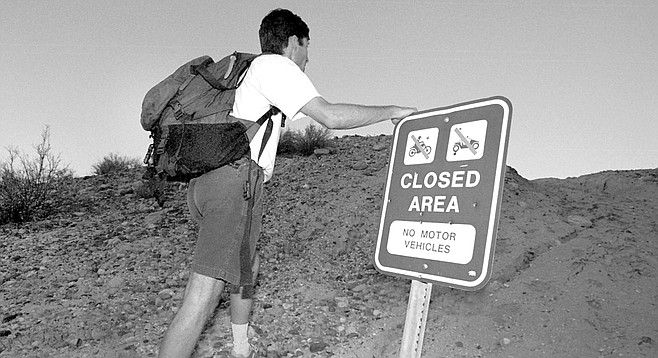 If you're in the mood to live some of San Diego's history and decide to traverse the old Butterfield Stage Route, you might find yourself in a danger that the pioneers who took that route in the 1800s could not have imagined. They may have been hot and thirsty, but there was no chance that their wagon wheels might set off a thousand-pound bomb. 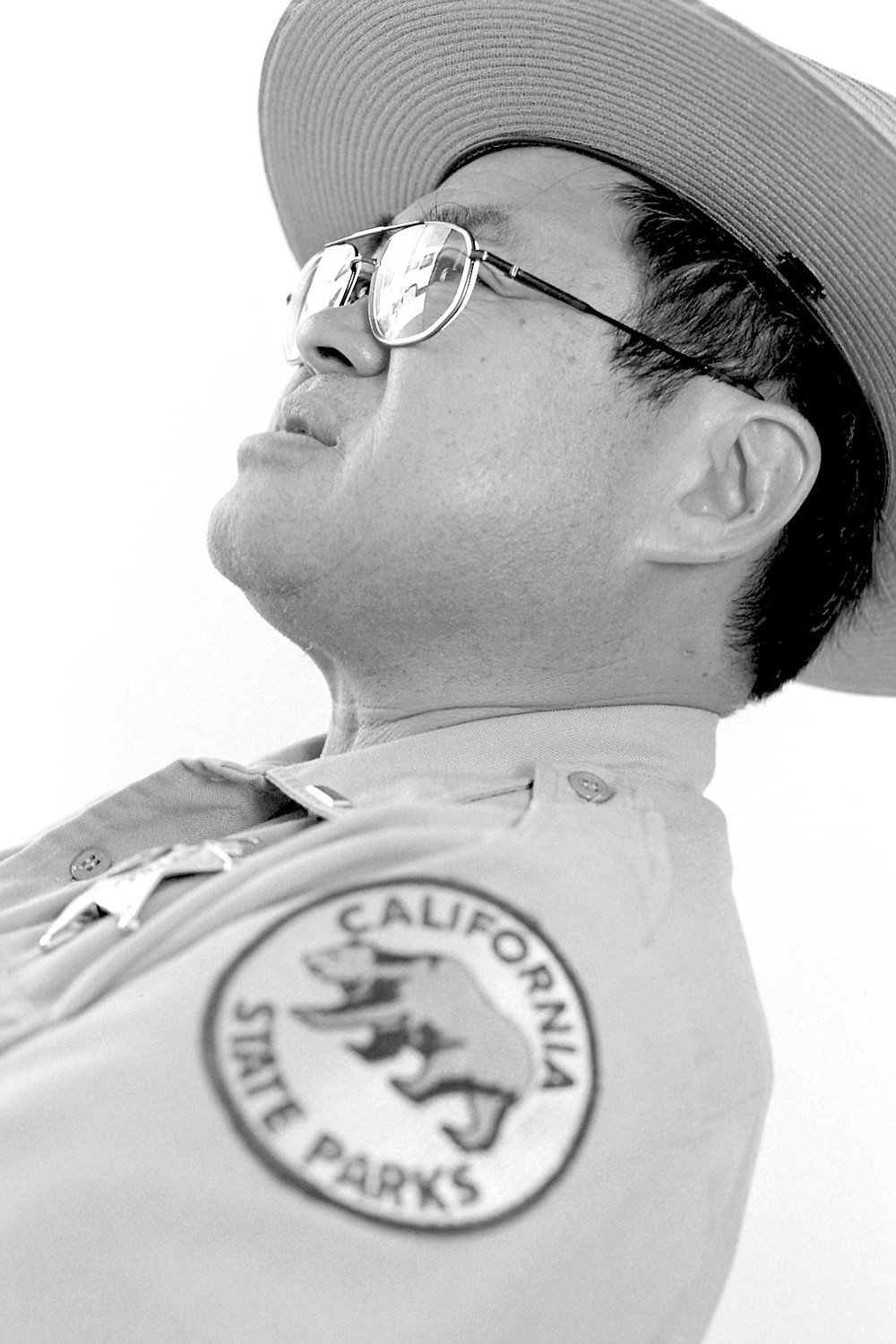 Fred Jee: "We were a mile away, and a piece of metal landed 20 feet from us."

Because the Butterfield Stage Route bisects the nearly 45-square-mile Carrizo Impact Area, a former Navy bombing range in the Anza-Borrego Desert, your hiking boot might just set off such an explosion.

But if you step on a bomb and blow yourself into the afterlife, it's your fault. You ignored the four- by six-foot signs warning you to stay out of the area. Those signs were posted by the Anza-Borrego Desert State Park, which owns 16,748 acres of the impact area. The balance is split among the federal Bureau of Land Management (10,005 acres), the Navy (640 acres), and private property owners. 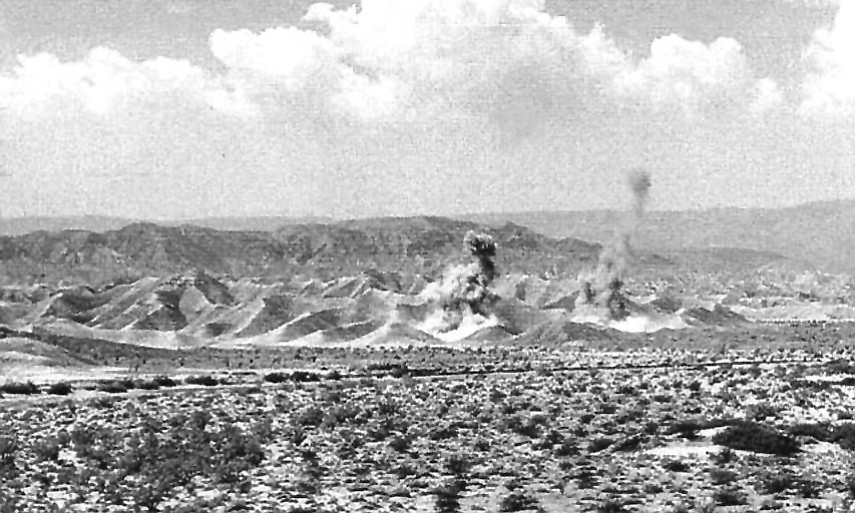 When ordnance is "too nasty to be transported," Albritton and his team blow it up where it lies.

The range sits in sparsely vegetated desert mountains populated by rattlesnakes and rodents, bobcats and bighorn sheep. Naval Air Facility El Centro is about 25 air miles to the east. 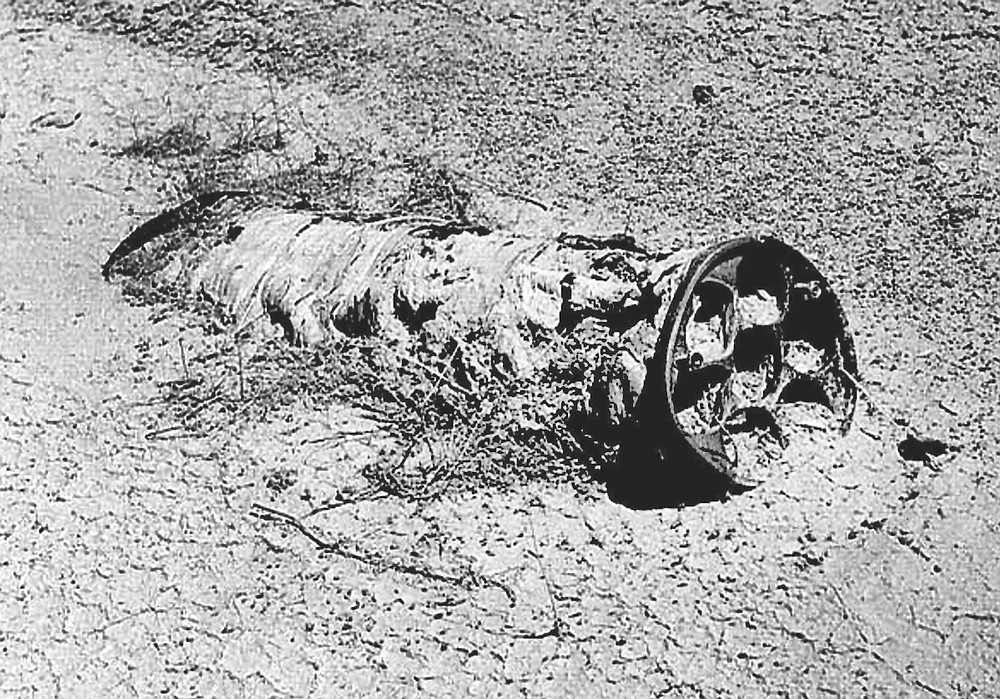 Rocket launcher. A lot of ordinance is imbedded in the sand as far as 30 feet down.

Other than the Butterfield Stage Route, there isn't much reason to be in Carrizo. "It's in a very rugged, very remote area," says Anza-Borrego Desert State Park supervising Ranger Fred Jee. "And it's 45 minutes to an hour by dirt road from the nearest paved road," he says. 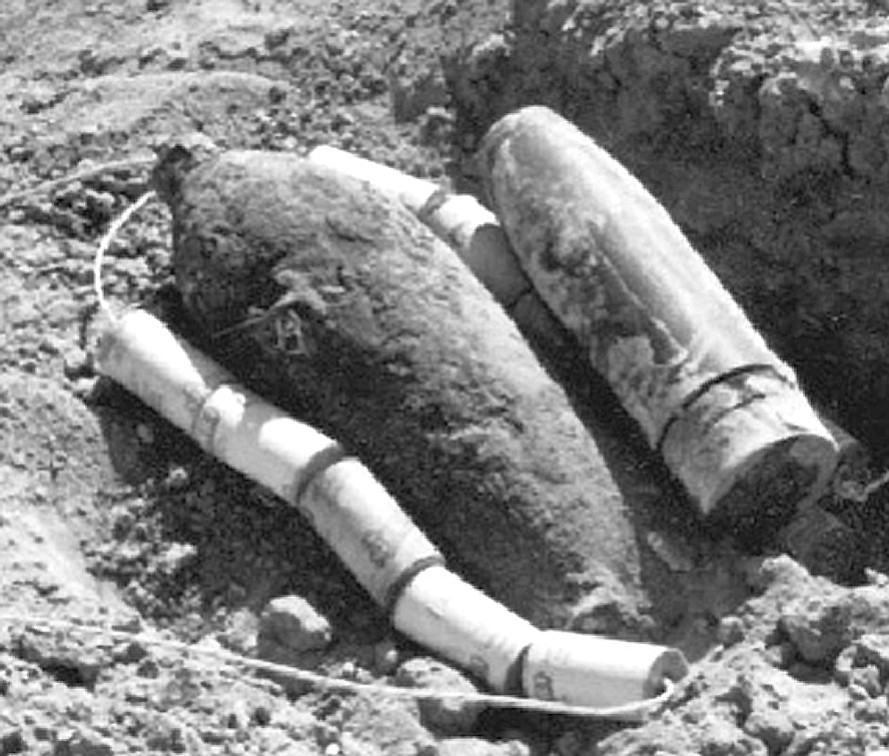 "The Carrizo Impact Area was used as an air-to-ground bombing range during World War II and the Korean Conflict," states a December 1993 report compiled by the Army Corps of Engineers. Aircraft from NAF El Centro used the area as a target range for various bombs (3 to 1000 pounds) and rockets. Other ordnance used in the area included 20-millimeter cartridges and 50-caliber bullets. Bombing activities at the site reportedly ceased on 30 June 1959. After that, a few ordnance activities were reported to have been conducted. The first clearance reportedly occurred during late 1959 and early 1960. A subsequent decontamination sweep was conducted throughout the month of January 1965. "Significant amounts" of both explosive and inert ordnance debris were recovered. On April 7, 1970, state and U.S. Navy representatives inspected the former bombing range. During the one-day inspection, "several" aerial bombs and rockets and "numerous" 20-millimeter rounds and 50-caliber bullets were discovered. While the location of the ordnance was not identified, all ordnance found was detonated or found "nonexplosive."

A subsequent report, completed June 1, 1995, by the Corps of Engineers, whose Los Angeles office has jurisdiction over the site, is more specific as to what ordnance was recovered in the three sweeps of the area and what is still out there. The presence of unexploded bombs and rockets, large caliber rounds, and munitions containing spontaneously flammable material earned Carrizo the Corps' highest "Hazard Severity" rating of "Catastrophic."

Jee can attest to the high severity. "I was there one time around two years ago when they detonated a 500-pound bomb," he says. "We were a mile away, and a piece of metal landed 20 feet from us."

He is referring to the 710th Explosive Ordnance Team, an Army unit stationed at the submarine base on Point Loma. For the last year, Sgt. Kevin Albritton has been in command of the outfit. "I've been out there once in that time," he says. "There was no hazard. I think it was an old rocket motor."

For the ordnance team to go out to a site, Albritton explains, "By law, we have to have a request by a civil agency. Once we are requested to go off, we go down, we reconnoiter it to see exactly what we have. To a layman it all looks like it's live, and it's best if they treat it that way. We want them to call us or call the sheriff or park ranger so they can call us. The army gives me an extra $150 a month to deal with this stuff, so it should be me taking the risk. If we determine it's something that's safe for transport, we haul it away. If it's too nasty to be transported and needs to be disposed of where it is, we do that."

Albritton declines to list examples of what's disposed of on site and what is hauled off. "I don't like going into that because somebody might think they know what they're looking at and think, 'That's not the one he talked about, so I'll pick it up.' I like to leave it all in the mystery area to keep the average Joe from sticking his hand on it."

Because the ordnance littering the Carrizo Impact Area was dropped from planes, a lot of it imbedded itself in the sand as far as 30 feet down. Over the years, the earth has brought the objects back up. "You'll be driving through the Carrizo wash, which is the only way through the place," says Ranger Jee, "and there will be a 500-pound bomb sitting in a spot where there was nothing but sand last time you drove through."

This is due to wind and water-caused erosion and also to the natural expansion and contraction of the soil brought on by temperature changes: the Anza-Borrego Desert can experience 50-degree temperature swings in a 24-hour period. "It's like a farmer plowing his field," Albritton explains. "One year he plows his field and pulls all the big rocks out of there. The next year he thinks there aren't going to be any rocks, but there are. What happens is the frost-thaw cycle pushes the rocks up."

When these natural processes reveal ordnance "too nasty to be transported," Albritton and his team blow it up where it lies. "We make sure the area is secure," he explains, "and we use military plastic explosives to countercharge the main charge."

How far away he stands from the blast is determined by the size of the ordnance plus the size of the explosives used to detonate it. Once it's blown, "We go back down, take a look at the site and make sure we've done what we were trying to do, make sure there's nothing left that would be a hazard. It is what we call 'checking the shot.' "

The damage inflicted on the desert also varies according to the size of the ordnance exploded. "It could be anywhere from a divot that's less than a foot across and a few inches deep to a hole you could lose a truck in. It also depends on the construction of the bomb, whether it was designed for explosive effect, shrapnel effect, or whatever."

Though the Corps of Engineers gave Carrizo its highest "Hazard Severity" rating, the impact area has the second lowest of five "Hazard Probability" ratings, "Remote," due to the lack of structures or habitations within a 20-mile radius. Factoring the hazard severity and the hazard probability, the Corps of Engineers gives the Carrizo Impact Area a "Risk Assessment Code" of three on a scale of one to five (one representing the highest risk). A three rating carries the explanation, "Recommend further action" but is not a high-priority. Since the report's completion, there's been no further action. The Corps of Engineers didn't return calls seeking comment.