Yachtsmen are mindful of ladies 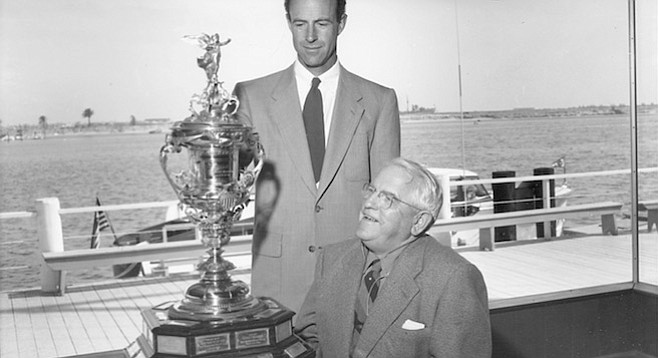 The story of the San Diego Yacht Club, as Iris Engstrand’s illustrated history shows, also tells the story of San Diego. Along with the Dennis Conners, commodores of the club include Jessops, Treptes, Goulds, Frosts, Driscolls, Frazees, Kettenburgs — with suntanned faces, windswept hair, and sailing caps squared or at jaunty angles — who have steered local history for the last 114 years.

In 1852, two years after San Diego became incorporated, San Diego Bay saw its first regatta. Captain James Keating, Point Lomas lighthouse keeper, won a “gold-chased crinking cup” worth $250. Judson Ames, in his schooner Lavinia, took second prize, a “silver-speaking trumpet,” and claimed he could have taken first had he not “run aground on the flats off La Playa.”

The Yacht Club was founded in 1886. Its “burgee,” a triangular pennant flown on a “pig stick” atop the mainmast, was blue with a white star. The club’s first home was the Ballast Point Lighthouse, “just inside the tip of Point Loma.”

Nineteen thirty-four, however, remains the club’s most active and ambitious year. Kenneth Hallawell, club historian, recalls: “Many old-timers will always remember 1934 as the year during which they worked harder and accomplished more than they ever had done before, or have done since.”

Among the competitions that year, Victor Doyle won the U.S. Grant Hotel Trophy. His Trilby was the first boat to “reach” around North Coronado Island. And Ash Bown won the Lipton Cup, in Los Angeles, by default (the winner, Debra, got scratched for having too large a crew). Bown refused the Cup, saying one shouldn’t win it “in such manner.”

The club’s most memorable award was given at an annual dinner-dance for the SDYC’s “sub-club,” the Royal Order of Mudhens. The perpetual trophy — donated by the Jessop brothers — went to anyone who fell overboard or capsized a skiff while fully clothed. According to an article in the San Diego Union, the Mudhens (a.k.a. “mudders”) formed in self-defense.

One of the Mudhens’ charter members was Roy Hegg, commodore of the SDYC in 1934, who skippered Zephyr to a “hair-line victory,” over R.D. Israel’s Aloha, in the George Washington’s Birthday Regatta.

The trophy has since been “retired” but, according to Charles La Dow, “was the cause of much levity.”

In 1934, the club’s 48th year, Viola Sommermeyer became the first woman to attain coveted “flag” status. She was 38. As a youth, she wanted to become an engineer, but advisors at the University of Minnesota told her that wasn’t an appropriate career for a woman. So she studied chemistry at Minnesota and later zoology at San Diego State “College” and parasitology at UC Berkeley. From 1930 to 1950, she ran the San Diego Clinical Laboratory in Pacific Beach. Her specialty was allergies.

She lived in a redwood house in Roseville — an area from the Naval Training Center to Talbot Street in Point Loma — and took an interest in boating. The SDYC doesn’t mention the impact of her “flag” status, though several years later, when the club secretary died, there was no record of her membership. “A woman can’t be first class,” writes her cousin, Karl H. Sommermeyer, imagining the reaction. “Luckily, one of her sponsors was still aboard to back her, but her official seniority was reckoned only from the date of that rescue.”

Nineteen thirty-four also saw the beginning of dredging, off the Roseville coast, for what would become Shelter Island. The area around the Roseville Pavilion was so shallow, the shoals so dangerous, says Iris Engstrand, “It was difficult to sail boats in and out of the bay at low tide. They’d get hung up on that little spit of land. So it was natural that the dredging took place. Then, in order to dispose of the sand, they built up the island.”

Inspired by Commodore Roy Hegg and Port Director Joe Brennan and sponsored by the San Diego Harbor Commission and the federal government, dredging began October 25, 1934. It included a 200-foot-wide channel, 20 feet deep, in front of what would become the SDYCs new clubhouse site.

Shelter Island evolved as an afterthought. The dredging created an area where sail and power boats could come in and make a turn. Plus, it provided much safer anchorage than before. The island started as a place to dump leftover “spoil” from the channel. In time, Engstrand adds, “It created a pretty valuable piece of real estate.”

“The name Shelter Island, chosen by [club] members and accepted by the Port Director, was no euphemism. Low as that sandspit now was, the southerlies would, hopefully, no longer devastate us with heavy chop.”

Another key reason for dredging developed earlier in 1934. The SDYCs two-story, wood-frame clubhouse, at that time, overlooked Coronado’s Glorietta Bay. But as San Diego grew and more members lived on the “mainland” — around Point Loma, in particular — these members wanted a site closer to home. “There was serious discussion,” says Engstrand, “about who deserved to have the club: the people in Coronado or those in Mission Hills and Point Loma, who didn’t want 10 make the trip — either by sail, motorboat, or ferry — to the island.”

For many years the SDYC had a second site in the La Playa area of Point Loma — the beachfront that runs west from the foot of Talbot Street and the Roseville Pavilion. Pressure for some kind of move grew, and on January 14, 1934, at dawn, the San Diego Yacht Club moved its clubhouse, from Glorietta Bay to La Playa, on water.

The Ships, the House, and the Men: A History of the San Diego Yacht Club, by Charles LaDow, Frazee Industries, 1977.