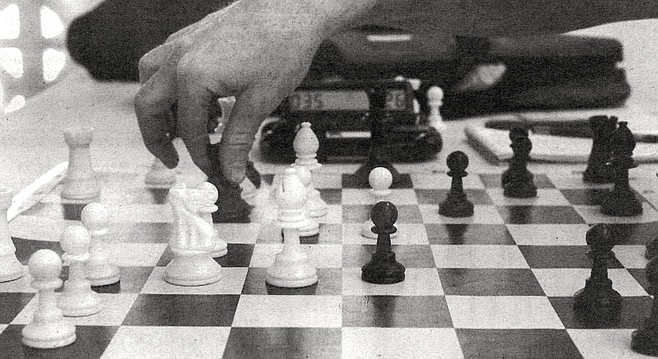 Don’t think of chess as two old men sitting there slugging it out,” says David Saponara. “It’s essentially a kid’s game. It’s kids who like to play it. And if a person has the talent, it will manifest itself at a young age. I’m a strong club player, a former expert, close to expert level now. But as you age, your rating tends to tail off.” 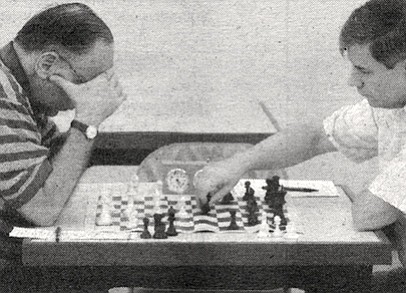 The club boasts “virtually all the strongest players in San Diego County, including one of the best players in the United States” — 41-year-old Cyrus Lakdawala."

Saponara is 56. A member of the San Diego Chess Club since 1971, he was 11 when he was introduced to the game back East. “One summer I was at the seashore in New Jersey with my family. I went to another boy’s house, and he taught me how to play in an evening. And it was just such a thing that was so ‘me,’ I went home that night and made a set out of cardboard and started playing with that.”

In what way did chess’ nature appeal to his own? “Chess is for people who like to solve problems,” says the retired naval aviator. “One player tries to pose a problem, which the other player has to identify, and then hopefully counter, while simultaneously posing a problem for the other player.”

A great chess player may not even be, say, a great Go player. “One of our club members plays Go. It’s another game of grand procedures, a problem-solver’s board game that doesn’t require any physical strength. And the same kind of people who like chess might like to play Go. I have a Go set but hardly ever use it. The trouble is, both games are so highly specialized, it takes so much time to get really proficient. Plus, once you get into the higher levels of any game or sport, it gets so specific. If tennis, for example, were modified slightly, if maybe they varied the court size or net height, or if some rule were changed, we might have an entirely different set of world champions.”

Who are today’s world champions of chess? “Two are recognized,” says Saponara. “One is Garry Kasparov. I’ve met him twice and had lunch with him once. He’s a wonderful human being, very outgoing, unlike many other top players, who are good at chess but have a hard time grasping the social thing. And then there is a younger player named Vladimir Kramnik. He beat Garry in a world-championship match about a year ago. It was a very difficult match. I think there were only two decisive games. The others were all draws.”

Why so many? “As you get into stronger and stronger competition, it gets harder and harder to tip over the other player, so the possibility of a draw increases. At our club, players such as myself draw 5 to 8 percent of our games. The masters at our club — and we have quite a few — will draw 15 to 25 percent.”

The club boasts “virtually all the strongest players in San Diego County,” says Saponara, “including one of the best players in the United States” — 41-year-old Cyrus Lakdawala. “But we also have players at every other level, all the way down to beginners.”

The professions are widely represented among their 150 to 200 members. The Go player is one of two lawyers in the club. “We also have a consulting engineer and a man with a doctorate in physics. We have a retired chemist who worked in the pharmaceutical industry; he’s a master. We have a physician, who’s not one of our best players, but he’s not one of our worst. We have a 91-year-old woman who used to be the registrar at Toledo University in Ohio. It tends to be a man’s game, but we do have a few other women, too.”

There are also unemployed people, says Saponara — “in fact, quite a few.” And several people who, as he puts it, “have never found themselves” but are excellent chess players.

As many as 90 members play in the weekly Wednesday-night tournament, which Saponara directs. A new weekly tournament, on Saturdays, has so far been attracting about 20 players, who, says Saponara, “tend to be more hard core.” Despite describing chess as a kid’s game, Saponara says children aren’t uniformly encouraged to play with the adults. Most are funneled into the children’s program and play in its tournaments. (The next one is in November.) “We don’t encourage them to play with us until they achieve a certain rating,” he says. “When they get there, we look them over.”

For one teenager, Saponara says, it was “rough going” at first. “But all of a sudden he beat an adult, and then he beat another one. Gosh! He’s won seven or eight games since.”

In order to participate in tournaments, competitors must join the San Diego Chess Club and the United States Chess Federation. Not all competition is in the form of tournaments, however. The Balboa Club is open seven days a week, noon to 6:00 p.m. for casual play. Spectators always welcome — “as long as they don’t talk.”