Fear for My Life 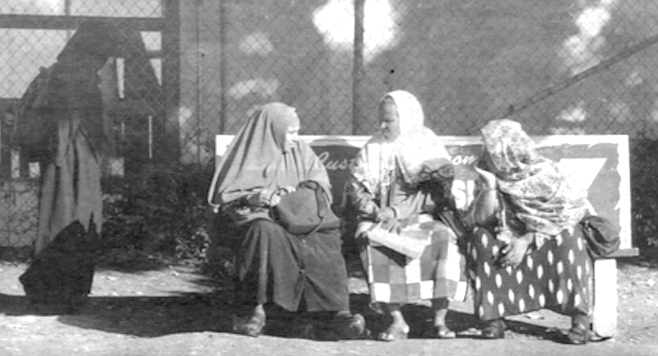 It's Veterans Day at Lindbergh Field -- the morning of the American Airlines explosion in Queens. The parking lot at terminal two is half empty, and only five taxis are lined up for arrivals. Yousef (not his real name), a Somali native, picks me up and takes me to his East San Diego neighborhood. 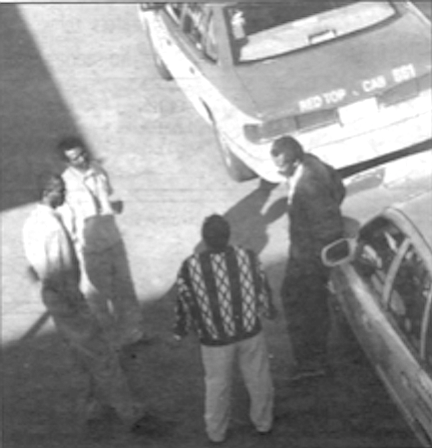 Somali men. "All Somalis living in San Diego feel very sorry about what happened on 9/11. It has touched every one of us."

Yousef, 32, fled Somalia in 1991 and has been a U.S. citizen for three years. "I fled for my life. I came here as a refugee ten years ago. My tribe was at war with other tribes. We were attacked in Mogadishu, and my family made a good decision -- to flee! We walked about 30 kilometers to the city of Afgooye, then we got a ride to Kenya. In Kenya, we were in a refugee camp near Nairobi for seven months. My sister was here, and she sponsored us.

"There is no life in a refugee camp. It was terrible. We lived in tents and very bad conditions. The food was horrible. The process is long because you have to go through medical examinations and background checks. I had my best wishes and that kept me going. We listened to the BBC, telling us of the terrible things that were happening in Somalia, and I knew there was no way I could go back. It was just 'hurry up and wait.' " He estimates about 10,000 Somalis live in San Diego.

As Yousef drives eastward on University Avenue through City Heights, we are surrounded by older buildings mixed with strip malls. Some of the buildings have large signs in foreign alphabets. Many of the people are dressed in fashions that would seem more common in the Middle East. In the midst of obvious poverty, there is also a vibrant mix of ethnic shops and restaurants with names such as Asia Fish World, Red Sea Restaurant, La Especial Produce, Thai Cafe, and Restaurant Afrique.This is the San Diego that the tourist bureaus don't advertise. "This neighborhood has Eritreans, Ethiopians, Sudanese. We get along like you could not believe. I wish we could get along the way we do here back home. If there is an illness among one of the community members, we all pitch in. If there is a death, we all go to the family and offer condolences. Back home, you have warlords who claim your ethnic group or clan affiliation. That leader wants to be a president and he calls his tribal members to help him and he makes promises. The tribal leaders make all the problems."

We turn off University near 50th Street to see the mosque that Yousef attends. He is able to point out people on the street. "He is Ethiopian. She is Somali." When asked how he can tell, he replies. "Their clothes. I can tell by looking at her veil. All of these apartments here are Somali. Only Somalians live here. There used to be a lot of crime here, but not anymore."

One crime that is on the rise in Yousef's community is death threats. "Although I am an American, I don't feel safe. I fear for my life sometimes. I've received threats on my cell phone toward my community and myself. Our mosque has received threats, and people have thrown eggs at it. It was unfortunate what happened to Americans and to the whole nation. All Somalis living in San Diego feel very sorry about what happened on 9/11. It has touched every one of us. We have condolence for our people, and when I say 'our people,' I mean that as an American. What happened was the inexcusable murdering of innocent people. If the people who did this claim they are Islam, they don't represent us. Islam is not a violent religion. I am proud to be an American."

The current state of distrust between Americans and followers of Islam has spawned many rumors, including one that Osama bin Laden's mother was Somali. Yousef is almost insulted by that suggestion. "That is ridiculous! If you know the history of Saudi Arabia's royal families, they don't marry outsiders. She is not Somali, and Somalia has nothing to do with Osama bin Laden. Most Somali people think that if he did this terrorist act, our book, the Koran, never says, 'Kill anyone for no reason.' You have to go to court and have someone found guilty of charges if you are going to take somebody's life. If you kill my brother and I kill you, there is no difference between us. But the code of law will get you executed. Most Somalis are not behind him and have nothing to do with him."

Since Somalia has no central government, those who wish to help family members back home must use a system called hawala. Yousef explains: "It's just like a bank. We must wire money to our loved ones in Somalia so that they can suffice. Normally, I send money every month because they have no work and the only income they have is mine. There is no bank system. This is the only way that my family can live.

"It's not like with Mexican workers. We can't send most of our money to Somalia, because I can't trust my money there. It's unstable. I just make sure that my family can live and eat. I have the promise that my hundred dollars will get there. Here, they don't take anything, but when they transport the money, they charge us $2.50. I go to the nearest hawala place and give them the name of the person that I am sending money to -- their tribe affiliation, my name -- then I wire the money and it will get there. If it is a rural area, it will reach them by truck or by camel. It's an easy way for us to send money, and there's no other way we can send money to our family. I hope that I can bring them here someday."

Yousef refuses to disclose where hawala transactions take place, since a major hub of such transactions, Al Barakaat, was closed down by the government just a week before. "That's a big hit to Somalis. They were saying it was for terrorists, but I don't think they had anything to do with terrorism at home or here.

Yousef has a wife and two children in America and supports three brothers, one half-brother, two sisters, and an aunt in Somalia -- a burden that keeps him behind the wheel of his cab 80 hours per week. "It's very tough on me, but I have to do it." Many of the thousands of Somalis who live in San Diego support family members in their native land. Besides cab drivers and shopkeepers, another popular Somali profession is high-tech assembly for companies like Sony and Qualcomm.

While he is upset by the hate crimes committed against himself and his fellow Muslims, Yousef also understands where it comes from. "They are feeling the pain of what happened in New York and Washington. But so do we. We feel the same pain and even more. There were also Muslims who were victims at the World Trade Center. A terrorist can be anyone. Before September 11, the saddest day in America was when this McVeigh guy killed all those people. We have to get together with every faith, educate ourselves, help each other, and watch our backs!"

The suspicion of Muslims has brought many changes to Yousef's life and his family's. His airport fares have dropped dramatically. His wife, a vocational student at adult school, has dropped out. "I don't blame her. I've encouraged her to stay home. I believe it will blow over. I can see that even now it is getting better."

One thing that is not yet better is the way Yousef struggles to live as a Muslim. Between the bucket seats in the front of his cab is a rolled-up prayer rug. "Before this happened, I would pull over anywhere at prayer time and pray. I cannot do that anymore. I must fear for my life. I am not afraid that most people will want to kill me for praying, but some fanatic who is angry will do some bad thing to me. So now I wait to find a safe place to do my praying. We have to pray on time, and sometimes I go late so I can be safe. People in America are very respectful -- maybe not the younger generation -- when worshipping in their churches, temples, and mosques. But one thing we have here in America is freedom of religion, and you can believe whatever you want to, and you cannot be touched. People will respect you for your religion. Of course, that is not there now, since September 11, but it will come back. We will get over this and we can be one again."

Yousef is less hopeful when discussing America's image in the Islamic world. "Most Muslim countries dislike America because of Israel and the Palestinians. If I travel with my American passport to Arabian countries, I might get respect from the official governments, but I don't dare show the community my passports. They would say, 'Throw this away! You have betrayed your country!' They've been fighting in Israel a long time. If America would do something to help both sides, I think we can have peace in the world. But America seems to be one-sided and that is terrible. Palestinians are fighting with stones while Israel is fighting with machine guns. I hope we will do something about it as Americans."