The urgent dancing of wartime 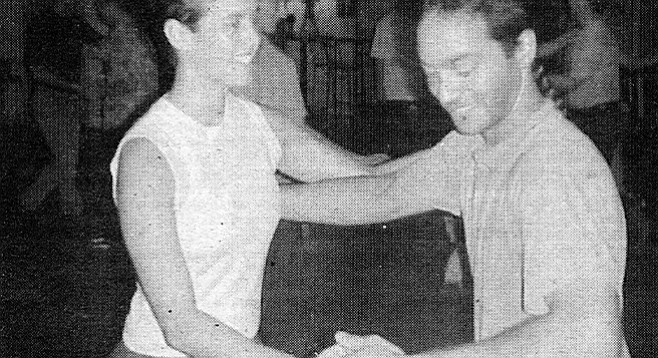 The Gaslamp District was wall-to-wall Navy. Kids with buzz cuts closer to the head than dandruff and dames with short skirts, bobby socks, and hungry nuts-to-you-Mom looks that originated below the waist. The tourists were making themselves scarce this Friday night, probably hiding under their beds back in Duluth and Barbecue Hills waiting for enemy aircraft to dive-bomb the local mall. The streets belonged to the sailor boys and the dolls who’d be getting their censored letters next week from some place no one ever heard of.

I was working on a second cup of coffee at Clayton’s on Seventh and F and thinking about a piece of their blueberry pie while I burned a Camel on the street comer. I figured since I wasn’t pouring bourbon in my coffee these days, I could handle the calories. To hell with it— I could even handle the pecan pie. The night was close, half fog and half a kind of invisible humidity you get i California in October that clings to our trench coat and palms like an old girlfriend who stayed past her summer welcome.

The kids started coming in about eight, just as Artie Shaw began the Beguine on the house turntable. Five bucks at the door or thereabouts and hey could dance the night away — and the war and cold-sweat dreams of telegrams that began, “We regret to inform you...”

Wartime can maybe be an aphrodisiac. There's a certain urgency and danger that fuels a crisis sensuality, and you could see it kind of backlit in the eyes of these kids whose childhood, one way or the other, was about to become a memory.

Robert Clayton Stich appeared from the kitchen, wiping his hands and smiling. The owner of the java shop and Friday-night juke joint is an amiable, avuncular fellow with no hard edges. I tossed my butt onto Seventh and wandered in to say hello.

Stich has had the location since ’97 when he bought out the Gashouse. “It was a cool place,” he allows, “but it always bordered on being rough. There was gang activity, ravers, somebody would get drunk and throw someone through the plate-glass window, graffiti on the bathroom walls.. .it was a nightmare. First thing I did was restore the 1913 original hardwood floor.”

The surface he’s talking about is a mellow and slightly scarred golden oak; it lends the place a historical quality and warmth. Guys and dolls form a circle around a couple. The dame goes stiff-legged as her partner slides her between his knees. The rest of the gang are swaying in place and clapping time with long, vertical arm movements. The dance teacher, Meeshi, hasn’t arrived yet. Someone is spinning Glenn Miller. A little “Drumboogie” with Gene Krupa sounding hopped up on God-knows-what kind of jungle juice as he works his kit like a speeding jalopy on a hairpin turn.

“I didn’t know you had to have a cabaret license. We had tango dancing going and then tried Western swing. The night we started it, the cops came in and said we had to have a permit and we had to stop it right now. I said, ‘Can’t we go to 11 o’clock?’ He said, ‘Right now. ’ So it took us four months to get a license, and the West Coast swing just never got going again. Meeshi approached me about swing and he organized this. We’ve had it every Friday night since then. I just wish the dancers would spend more; they just drink water.”

I wanted to tell Stich I was sorry about the coppers and their cabaret racket — about $600 a year. I wanted to tell him it was all just Chinatown. Thing is, it’s not, so I let it pass.

Then he tells me about BMI, the music publishers and copyright agency, putting the bite on him for a cut of the action — another $600 plus a year, just for playing records. Listening to Woody Herman’s band playing “Woodchopper’s Ball,” I think to myself the $600 won’t do Woody any good — being dead as high-button shoes and all.

Then I notice that not all the dancers are in their 20s. Spry geezers in their 60s and 70s are doing lazy circles around the chickadees like sharp-dressed, fleet-footed buzzards. “Go on, Gramps, take a powder,” one of the sailor boys says.

“What’s the rumpus, Junior?” I say. “Mind your manners and maybe I’ll buy you some baseball cards.”

“Quit flappin’ yer gums and dance,” his date says. A real tomato: long on legs and short on birthday candles.

The Dorseys, Louis Prima, Duke Ellington, the “Sweet Bands” like Sammy Kaye’s and “Blue Barron.” Guy Lombardo and Ralph Flanagan, I figure they’re all here somewhere tonight. It’s worth it just to come by for the coffee and pie and maybe hear Glenn Miller’s band play “String of Pearls.” But there’s a big, wide, wonderful world out there and it’s waitin’ just for me. I know this burg like a jungle cat knows the jungle. It’s my town and Friday is my beat.

I hit the bricks and turn my collar to the fog. Passing under a streetlight, artfully silhouetted against the mean lit pavement, I light up another Camel and think, “Yeah, a romantic loner in wartime San Diego, tough but true blue, that’s me.” I try to whistle “I’m Getting Sentimental Over You,” but I start choking on pie crumbs, and the Camel doesn’t help.