A new film noir from the Coen Brothers 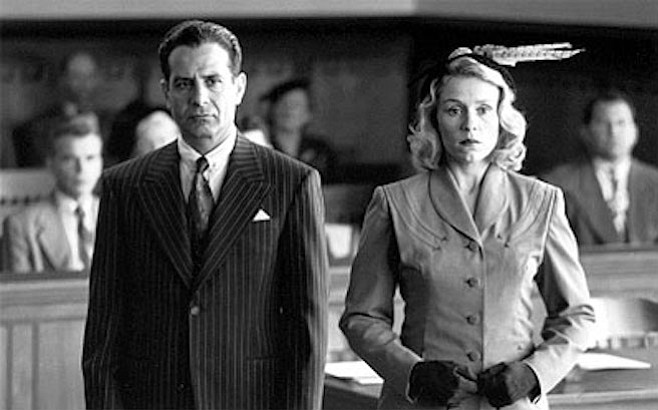 It had to happen sometime. The Man Who Wasn't There is the first Coen brothers movie to disappoint me. That’s not to say that it’s not good, certainly not to say that it’s not even as good as their first, Blood Simple, when I had no expectations of them at all and so could not be disappointed. Nor is it to say that someone without my elevated expectations might not be able to enjoy it without qualm or quibble. Or in other words enjoy it — another first — more than I. It’s simply to say that on my personal scorecard it brings to an end, or at least to a drop-off, one of the great streaks, if not the single greatest (and yes, I realize what I am saying), in the history of the American cinema: seven solid, extra-base hits in succession, starting from Raising Arizona. It would be the easy way out to blame it somehow on Osama bin Laden for taking a bit of the savor out of life in general. (The press screening was held on September 20.) Or it might just be the price we have to pay for getting a new Coen brothers movie less than a year after their last one, instead of the customary two years. In any event I felt a little let down.

The brothers have not suddenly lost their touch. They still do for Billy Bob Thornton what they did before for George Clooney in O Brother, Where Art Thou? and for Tim Robbins in The Hudsucker Proxy, namely make an unpalatable actor palatable, largely by gifting him with an interesting and well-written character, in this case a morbidly withdrawn barber employed in his brother-in-law’s shop in post-WWII Santa Rosa (“It wasn’t my establishment. Like the fella says, I only work here”), and a would-be ground-floor investor in a new-fangled enterprise known as dry cleaning. (It’s delightful how this term doesn’t just trip off (he actors’ tongues, but falters as if in a foreign language.) Where the Coens lit fires under the cool Clooney and Robbins, they throw a muzzle over the usually unbridled Thornton. Open and gabby enough in his first-person narration (“Me, I don’t talk much” and “Me, I don’t like entertaining”), he is practically catatonic in demeanor, allowing us to study and appreciate the Edward G. Robinson plushness of his lips, the Walter Huston boniness of his skull, not to mention the aerodynamic crimp in his toupee. (The barbering details, particularly the live illustrations of men’s hairstyles from the Butch to the Flattop to the Executive Contour, are precious but few, and are never as compelling as the barber’s dark inner thoughts on his profession: shorn hair as a form of human waste.) Frances McDormand, wife of Joel Coen, is back at work with the brothers for the first time since Fargo, casually monstrous as the cheating wife of the protagonist. “Wop”-hating, too, despite the casting of Michael Badalucco as her brother and James Gandolfini as her lover, a little Coen joke. And although there is no John Turturro this tax there is Mrs. Turturro, Kathenae Borowitz, as the cheated-on wife And Scarlett Johansson, of Ghost World is very touching as the unambitious, just- for-fun pianist in whom benighted hero takes an impresarial intrest (“That was pretty,” he judges whale overhears her rendition of Beethoven’s Pathetique. “Did you make that up?”). And Tony Shalhoub brings the same rat-a-tat energy to the role of the top-dollar shyster (“I litigate, I don’t capitulate”) that he brought to the Hollywood producer in Barton Fink.

The movie can use all the energy it can get. A mostly morose, spasmodically winking pastiche of James M. Cain, it has the bona fide artistic detachment we expect of the Coens (always happy to put words such as “Wop," “Nip,” “Heinie,” and “pansy” into the mouths of their characters, even the more sympathetic ones); and it has, in some measure, the ingenuity of plotting we expect as well (the hero’s money-raising scheme: to blackmail his wife’s lover anonymously for the affair he secretly suspects). Yet there is something un-excitingly déjà vu — Eng. trans., been there, done that— about the spiralling way in which the plot goes awry, and something hand-me-down about the roundabout way (straight from the Cain fields) in which justice ultimately gets done. There is no shortage of directorial nicety (the cracking but not shattering glass of the office window during the life-or-death struggle between blackmailer and victim, or the spinning hubcap that turns into the circular reflector on a doctor’s forehead after a car crash), but I couldn’t escape the feeling that the novelty of the brothers’ first essay in black-and-white was supposed to make up for any lack of freshness and originality elsewhere. And I thought the black-and-white, at least the daytime black-and-white, no matter how “appropriate” or “correct” (or pedantic or obvious) a choice it was for a period film noir, looked a little pale, a little milky, a little washed-out. And come to that, the bookish narration — no matter again how “appropriate,” etc., to the genre — is overworked. Any such reservations — just to put them in proper perspective — would be in relation to the Coens’ previous seven movies, not in relation to any other movie currently in first-run. The Man Who Wasn’t There, opening in town on Friday, will not be the first Coen brothers movie I see only once.

Va Savoir, though directed with calm assurance by the septuagenarian Jacques Rivette, does not rate the same treatment as the most recent works of his fellow former New Wavers, Resnais and Rohmer. Its flat and arid two and a half hours — a slow build to a silly end — are pretty compact for Rivette, whose record for a single movie stands at thirteen hours, but it is nonetheless sufficiently diffuse and undisciplined for any other director. I liked the Parisian locales. I liked the performances of Jeanne Balibar, Sergio Castellitto, and (a slim miss of almost Rohmer-esque charm) Hélèn De Fougerolles, and I liked seeing the erstwhile sex kitten Catherine Rouvel as the cakemaking mother of the last-named. Most of all I liked the sharp, spare, vivid sound, wonderfully alert to footfalls and squeaky floors. But this seems faint praise for an egghead romantic comedy of deliberate artifice and contrivance, one that dishes out extensive excerpts of Pirandello’s As You Desire Me, one that pursues a literary treasure hunt for an unpublished play by the 18th-century Italian dramatist Carlo Goldoni (shades of Henry James’s The Aspern Papers), one that self-consciously plays the theater-vs.-life game.

Donnie Darko is a dark comedy, photographically as much as temperamentally, about a disturbed adolescent (Jake Gyllenhaal of October Sky) who has an imaginary friend in a demonic bunny suit giving him mischief-making orders. (The bunny’s end-of-the-world forecast, however, carries little weight when the action is set in the thick of Dukakis’s run for the Presidency.) First-time filmmaker Richard Kelly, age twenty-six, reveals an individual voice and an eccentric sense of humor (i.e., sometimes actually funny), and even when he hits predictable notes (e.g., the Grundy-ish old crone on the high-school faculty, who, when asked whether she knows who Graham Greene is, responds, “I think we have all seen Bonanza"), he hits them at his own unforced pace. Much the same can be said for his frugal use of special effects. The time-travel resolution is nonsensical even by time-travel standards, and it has the effect of wiping the slate clean in the chicken-hearted fashion of the it-was-all-a-dream convention. “Clever” is the compliment it was fishing for. “Gimmicky” might be the reasonable compromise.

K-PAX — no, not an easy-listening radio station, and not a merger of Kotex and Tampax, but an undiscovered planet in the constellation Lyra — presents an unscintillating duel of wits between doctor and patient at the mixed-nuts facility of the Psychiatric Institute of Manhattan. Kevin Spacey is either a spaceman (the early evidence, apart from the actor’s surname, is all on that side) or else he is a mere lunatic (some late evidence for that, without negating the early evidence), but either way he is given carte blanche for his smirky superiority. Jeff Bridges, as the psychologist, keeps peeling the glasses off his face in exasperation. The syrupy photography by John Mathieson is meant, presumably, to convey the special relationship of the alien/inmate to the realm of light, especially as a mode of interstellar travel. It’s sticky all the same.

Focus, based on an early novel by Arthur Miller, is an outmoded message movie, set back in the Second World War to excuse its squareness, dealing with a middle-aged Presbyterian whose new spectacles make him “look Jewish.” For some unapparent reason, his even newer blonde-bomb-shell wife (Laura Dem, a Marilyn Monroe figure, if you’re influenced by Miller’s presence in the equation, or an Anita Ekberg figure if you’re swayed by her Dolce Vita plunge into a park pond) seals his reputation among his anti-Semitic neighbors. Our own inability to see what the neighbors see — and please don’t tell me that that’s the Whole Point — lends a kind of Kafka-esque abstractness to the thing, and a kind of absurdity. Not a good kind. William Macy, always adept at looking sat-upon and squashed, might have seemed more interestingly cast if he were sooner to rise above a doormat. The visual interest — geometrized compositions, heated-up Edward Hopper color, Venetian-blind shadows — is pretty relentless (director Neal Slavin is a noted still photographer), but it doesn’t alter the movie’s tunnel vision.